I took a long hike today through a local nature preserve. It was a humid 96° F with the heat index, thanks to the humidity making it feel like 110° — too hot to work on the stone re-pointing job I’m doing on our old stone house. I needed some nature, though, after spending the last few weeks reading and writing about our insane political situation, with Republican Donald Trump, a con artist posing as a fascist and denouncing minorities and immigrants and Hillary Clinton, a Democratic war-monger, corrupt and probably richer than Trump, posing as a people’s advocate. 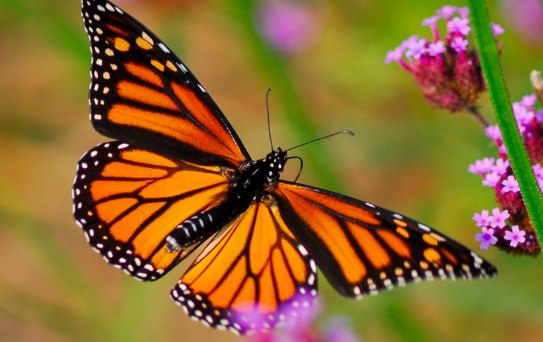 Mexico-bound Monarch butterfly…but will the butterfly reserve still be there for it?

Wandering down a path into the woods and following a local stream, though, I found myself getting more troubled than before. These woods, where I’ve walked for years, used to be filled with myriad species of birds — water birds, hawks, songbirds and others, and insects — dragonflies, butterflies, bees and flies of all kinds, as well as frogs, turtles and snakes. I’d usually return from such walks to report having seen a Baltimore oriole, a blue heron, a garter or a water snake, a large snapping turtle or one or another kind of hawk. I wouldn’t even report on the butterflies, as they were myriad.

Today though, the forest was quiet. Occasionally I’d hear the sound of some unidentifiable bird, probably a starling or sparrow, but bird sounds were rare. Sightings too. I heard no cries from bluejays or crows, saw no hawks or waterbirds — not even mallard ducks, and heard no songbirds. I saw one small painted turtle sunning itself on a fallen tree in a dammed up part of the stream — a spot that used to be covered with turtles on a day like this. And I heard no frogs, which might explain the lack of any herons or other wading birds. The two creatures I did see were a deer (these apex mammals seem to have made the suburbs home, with no available predator except the automobile to diminish their numbers, and with grass and suburban flower gardens providing abundant food) and a beautiful solitary orange Monarch butterfly, which was flying with more purpose, in almost a straight line down the pathway, than I’ve ever seen a butterfly fly (perhaps it is on it’s lonely way to Mexico hoping to find a mate?). Other than that, there were almost no bugs too. That’s really scary, since bugs, besides pollinating plants, provide that basic protein source for most larger animals up the food chain. I had read that bugs of all kinds are in a dramatic decline all around the globe, and it certainly looks like it if they aren’t even pervasive in a nature preserve where there is no insecticide being used, where grass isn’t cut, and undergrowth is left alone.

I had noticed this decline earlier when we were up in the Catskills where we have a summer house. The streetlight in front of our property, which used to be enveloped in literally thousands of moths, flies and flying beetles during late spring and early summer months, to the delight of the brown bats that dove into the cloud again and again filling their bellies each night, these days is devoid of insects, which is astonishing and, when one thinks of it, terrifying.

As I walked through the nature park, where biting creatures — deer flies and horseflies — used to harass me in years past, I was only visited by one horsefly, which I dispatched as it landed on my arm, thereby worsening the dearth of insects and causing me to feel a little guilty about it.

I returned home angry. How can we, as Americans, be even contemplating the idea of installing at such a moment of crisis in mankind’s history, either of two candidates who don’t really give a damn that we are destroying the earth’s ability to sustain human life, or for that matter, most of the astonishing ecosystem that has evolved over hundreds of millions of years of evolution? Trump denies that climate change is real, while Clinton, vastly funded by a banking industry that finances the industries that are destroying the earth, by energy companies, power companies and automotive companies that are doing the actual destruction, has no intention of taking dramatic action to halt the pumping of more greenhouse gases into the atmosphere.

President John F. Kennedy, looking out the Oval Office window on a rainy day during the depths of the Cold War, asked his science advisor if the rain outside was contaminated by radioactive fallout. Upon hearing a “yes,” he decided, to the shock of his military advisors, to unilaterally call a halt to open-air nuclear testing, and to get the Russians to do the same — which they did. But I’m afraid both the major party candidates running for president this year are such power-hungry narcissists that they are incapable of doing the one thing that might save us, which would be to wake up one morning in the White House next year and, recognizing the looming disaster of climate change, to call for a halt to any further removal of hydrocarbons from the ground.

Both Clinton and Trump have demonstrated that they are damaged persons who crave power at any price and who are not going to risk losing power by doing anything that would anger or threaten the acquisitive aspirations of the ruling elite of the nation.

We are, to put it bluntly, f**ked. I can see it just walking through the Trewellyn Nature Park, where it’s abundantly clear that things have reached a point of crisis already. We in the US, the largest contributor to climate change if one considers not just the present but our historical record, cannot wait another four years, much less eight years or longer to take dramatic action.

That monarch butterfly I saw — the only one I’ve spotted all summer here in southeastern Pennsylvania or up in the Catskills, both places they used to be rampant only a few years ago — had the right idea, I suppose: get the hell out of here! But then, if it manages somehow to make it to the monarch meeting place in Michoacan, a province in Mexico’s central highlands, it may find the ancient pine forest where its forebears used to gather, turning the trees orange with their multitudes, gone. It turns out that local farmers, desperately poor as NAFTA has destroyed their local subsistence farm economy, are cutting and burning the pine forest there and planting avocado trees, in hopes of earning a better income from that high-priced fruit than from the corn that for generations they used to grow for local consumption. But included among the forest they are destroying to satisfy insatiable first-world guacamole demand in the US and Europe is the butterfly reserve that the monarchs rely on.

Rachel Carson kicked off the environmental movement back in 1962 with her book Silent Spring. She was focusing then on the destruction of songbirds by the pervasive use of pesticides. But what I saw on my park stroll was a silence even deeper. It’s not just the birds that are gone now, it’s almost every living creature in the woods! The plants are still there, but as the pests that threaten them — many of them invasive results of globalized trade like the ash borer, the gypsy moth, oak wilt fungus, etc. — attack trees that are also being stressed by climate change with its season-changing warm periods and its periodic droughts — that may not be true for long.

Hillary Clinton has it all wrong. When it comes to taking on global warming, what we need is not “incremental change.” We need radical change, and we need it now.

There is only one candidate running for the presidency who is calling for such a crash program appropriate to such an unprecedented existential crisis, and that is the Green Party’s Jill Stein.

A Maskless US Heads Down a Dark Road as the Covid Pandemic Rages On
[caption id="attachment_5772" align="alignnone" width="571"] Will Biden's victory announcement declaring that those who are vaccinated won't need to wear masks indoors  be remembered as his premature 'Mission Accomplished' moment?[/caption]   In…
All Dave LIndorff's Posts

The algae eaters
After the Mars mission of 2027, They wanted to start colonizing the Red planet ASAP, a logical (to some) outcome Of utterly failing to halt climate warming. But, they needed…
All Gary Lindorff's Posts

Bootlickers Blind To Evidence Of Institutional Racism
The subject of entrenched racism and its poisonous persistence sparked a bunch of BS from T.S. on both sides of the Atlantic Ocean recently. This BS [bullshit] is vehement declarations…
All Linn Washington's Posts