Our cat died two days ago.

Soren, a little female, orange and white with a long tail and soft but fairly short fur, was a spirited, willful, and very intelligent creature. She could be incredibly affectionate and also could turn on you, scratching or biting when bothered–and sometimes, with a nip on the foot or the hand, just for no reason at all except that she got bored with rubbing against it. (Last year, when I went to visit a dermatologist for a check-up for the first time, she looked at my hands and said, “You have a kitten don’t you?” I had to reply, “Um, well, a four-year-old cat, actually.”) 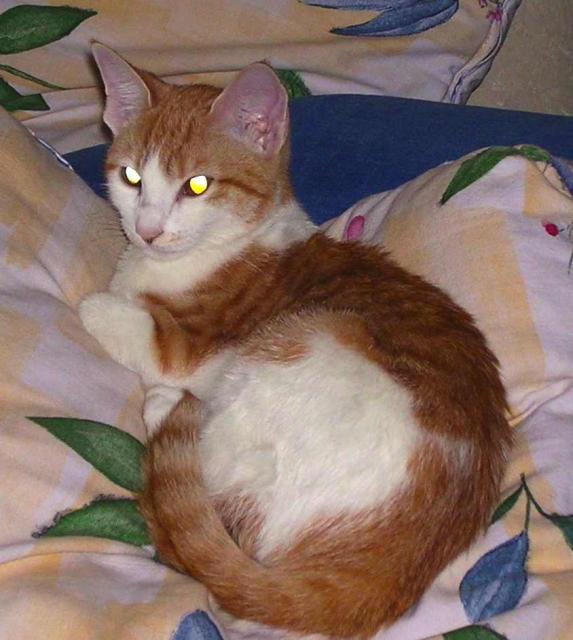 We’ve had other cats over the years, most of which lived to be 17 or 18 succumbing to some disease of old age, whether kidney failure or cancer. Soren, who was seemingly completely healthy and just five years old, died in her sleep on a comfortable chair she favored at night.

I found her, stiff but still slightly warm, looking relaxed, lying there in the morning when I got up. Her mouth was clamped down on a hunk of the bed sheet that we used as a throw over the chair to keep the two cats from scratching up the upholstery. It looked almost as if she’d died in the middle of playing with the sheet. The vet said the biting appeared to be a result of a convulsion that probably happened when she suffered a blood clot in the brain–the most probable cause of her untimely demise.

We are, quite simply, devastated by her death.

It’s amazing what a presence a little animal can have in a house–even one that includes two working parents, an 18-year-old son who is just finishing high school, and another cat and even a turtle.

Soren was just that kind of a pet. Originally picked out by our son Jed at a local shelter, when she was a little kitten in a cage that had a sign identifying her as “Tinkerbelle,” she was always around or underfoot. While I worked, she’d hang around my home office, either perched on the windowsill where she could simultaneously watch me and the birds outside, or on my desk, sprawled on my papers and notes (if TCBH! had a mascot, she was it). If I went downstairs for lunch or to make coffee, she’d get up and follow me across the house and down the stairs. She wouldn’t be seeking food (she was never a big eater); she just liked human company. 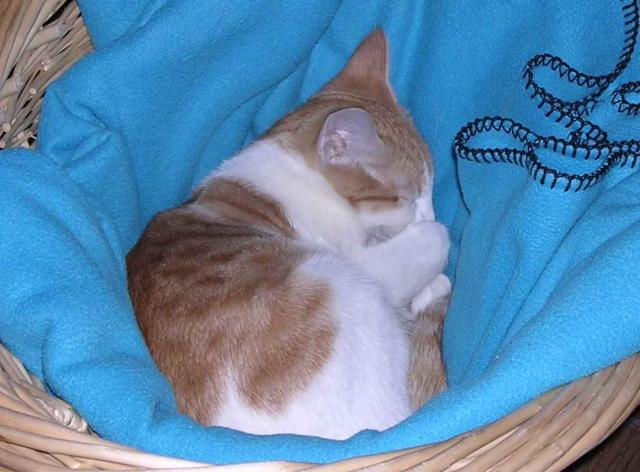 Soren as a kitten

We had a game that she loved to play. If I said “Soren, where’s the faery?” she would immediately tense up in a state of high alert and start glancing around quickly in jerky motions, ears pointed forward, eyes darting around the room looking for a spot of light from the laser pointer or flashlight I would use to make her zip around the room chasing after it. What she liked best was having me circle the light around her very rapidly, so she had to spin around equally fast, slapping her front paws down on the evasive and uncatchable light spot in a vain attempt to nail it down with her claws. I’d spin her clockwise, and then counterclockwise several times, have her chase the light across the room a few times, run her up and down the stairs, and then suddenly switch the light off.

Soren would look around for the light a little longer, and then give it up as lost.

She knew other words, too, besides “faery.” “Outside” and “Out” was one. To Soren, it meant outdoors, where she was always scheming to go, and also out on the porch, a screened-in area where she loved to go because it felt and smelled like outside. (We live on a busy road, where she would have died long ago from being struck by a vehicle if we had ever let her out.) Another word she knew was “water,” which meant water from the sink faucet, out of which she loved to drink.

Because I was the alpha male in our household, and perhaps also because as a freelance writer I was home the most, Soren and I had a special relationship. She seemed to prefer me to my wife Joyce, and my son, though when I would go away for a day or more, she would turn to Joyce with the kind of attention and affection she usually showered on me.

A special ritual she developed was to get on a desk or table directly in front of me if I was working or reading, and to stare at me silently. I was supposed at that point to push back my seat and lean back a bit. Then she’d very discretely and delicately step down on my lap, and then walk up my inclined chest, pressing her head up against the bottom of my bearded chin. She’d push up against my chin for a bit, and then settle down on my chest. At that point she would look up directly into my eyes and slowly raise her right paw, placing it, claws retracted, on my neck above the shirt line. She would lie like that, purring, for perhaps five minutes, and would then hop down and go about whatever business she had in mind at the time.

I painfully miss those little ritualized visits the most.

There is something about a good cat, and Soren was an especially good one. They aren’t the fawning, adoring pets that dogs are. Cats remain their own masters. But they have no guile. When they like you, they let you know it by purring, and when they are angry, they scratch or bite. Cats are what they are: flawed personalities, perhaps, but always straightforward and honest. In a world of shams, deceit, corruption and image, a cat is simply a cat, and the cat you have stays that same cat as long as you have it.

Rip Rense, a friend who owns three cats, informed of our loss, wrote, “ I absolutely dread the loss of any of our three cats—even the two who are mentally deficient and troublesome—but the loss of Trixie, who is two, and is without a doubt the nicest and happiest creature of any sort I have ever met, is not something I will be able to take. That this world should host creatures such as Soren and Trixie, these days, strikes me as almost bizarre. They are little living exaltations.”

Today, that little living exaltation is gone and our house seems to have a hole in it. Joyce feels it too. We look at a spot where Soren used to rest — the chair in Joyce’s office, the sofa in the den, the dining room table — and still expect to see her there. When I walk out the dining room door into the mud room, I habitually look down to see if Soren is trying to sneak past my feet in one of her unending furtive efforts to slip outside the house unnoticed. But now I don’t have to look down. There’s no Soren to try and sneak past, and our other cat, Fu-Fu, a stray our son picked up in the woods when it was a small kitten, has no interest in escaping the confines of the house.

Soren has finally escaped, though not as she had intended. She is buried out in the lawn in a spot she usually ran to when she did get manage to get through our defenses.

She is gone, and we are left, completely without warning, without her.