Members of the U.S. Senate, who now of late are blasting Russia for violating “the rule of law’ in the Ukraine, trashed that same fundamental legal precept during a vote to reject the man President Obama recently nominated to head the Civil Rights Division of the U.S. Justice Department.

Senate Republicans, with the support of a handful of Democrats, including Pennsylvania’s two Senators, rejected the nomination of Debo Adegbile, followed a venomous, falsehood-filled campaign against him launched by the National Fraternal Order of Police and exploited by conservative opponents of Obama (see the article below by my colleague Dave Lindorff).

The flashpoint Adegbile opponents used to frame their opposition to him was this highly qualified lawyer’s indirect and very remote involvement in appeals filed on behalf of Mumia Abu-Jamal, the Philadelphia journalist who was convicted for the 1981 slaying of a Philadelphia policeman. Abu-Jamal’s contentious conviction has been condemned by entities as diverse as Nelson Mandela,, the U.S. Congressional Black Caucus and Amnesty International, a widely admired legal organization that produced a lengthy analysis back in 2000 declaring his trial and appeals process “deeply flawed” and saying it “clearly failed to meet the minimum international standards safeguarding the fairness of legal proceedings.”

Adegbile worked for the NAACP Legal Defense and Educational Fund, an organization that officially entered the Abu-Jamal case in January 2011, more than nine years after a federal district declared Abu-Jamal’s controversial death sentence unconstitutional. That federal court action, upheld by a federal appeals court panel and ultimately by the U.S. Supreme Court, led to Abu-Jamal’s sentence being automatically converted to life in prison much, to the chagrin of police unions in Philadelphia and beyond, who had for years been campaigning for the former Black Panther Party member’s execution. Adegbile, a voting rights law expert for the LDF, was not the lead (or even backup) LDF lawyer on the Abu-Jamal case. 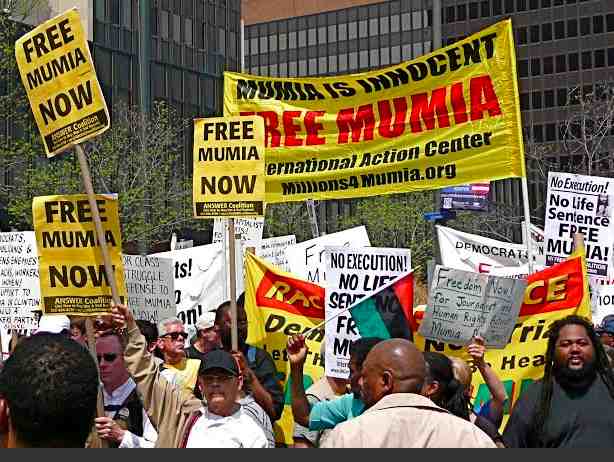 Protest outside federal courthouse in downtown Philadelphia demanding the release of Mumia Abu-Jamal, who is widely considered a ‘political prisoner’ in America (Linn Washington photo)

Furthermore, the legal issue that resulted in the voiding of Abu-Jamal’s death sentence -– errors by the trial judge during a death penalty hearing and errors in the jury’s ballot form -– had been a part of Abu-Jamal’s appeal years before 2001, when Adegbile first was hired by the LDF. The LDF joined in the appeal, working on the claim of fair trial rights violations by the prosecutor and trial judge during jury selection at Abu-Jamal’s contentious 1982 trial. Abu-Jamal’s lead attorney in the successful appeal of his death sentence, law professor Judith Ritter, handled the trial judge error aspect before the LDF’s involvement in the federal appeal, and also argued it to the appellate court.

The Abu-Jamal case is rife with repeated instances of violations of fundamental legal rights…violations consistently ignored by state and federal courts.

Although Senator Toomey acknowledged “there is absolutely no dispute that an accused person deserves” competent defense during trial and appeals, he still declared, contradicting his own words, “that is not what this is about, and then proceeded to contend that only a lawyer who would deny legal protections to Abu-Jamal could be fit to serve as the head of a Justice Department unit.

LDF President Sherrilyn Ifill, expressing her disappointment about Adegbile’s rejection by the Senate, cited the ‘rule of law’ that was blithely dismissed by Toomey and 51 other senators, including Delaware Democrat Chris Coon, a graduate of the Yale Law School.

The LDF’s involvement in the Abu-Jamal case, Ifill noted in a press release, “reflects its institutional commitment to ensuring that the criminal justice system is administered fairly and in compliance with the U.S. Constitution for all Americans.”

Ifill also noted that, “Unfortunately, Adegbile has been subjected to an unfair smear campaign.”

A January 6, 2014 letter to President Obama opposing Adegbile, sent by the National FOP, was part of that smear. That letter stated that Abu-Jamal’s “just sentence-death-was undone by your nominee.” That misstates the case, though, for it was not Mumia’s lawyers, much less Adegbile, but, a federal judge, Bush Sr. nominated William Yohn, who set aside Abu-Jamal’s death sentence, years before the LDF or Adegbile entered the Abu-Jamal case.

That FOP letter contained another criticism of Adegbile that exposed it’s real reason for opposing Adegbile: rank self interest.

The FOP is outraged because the USJD’s Civil Rights Division has initiated police brutality investigations in a number of cities across America. That is why the FOP’s letter to the president decries what it calls the Civil Rights Division’s “aggressive and punitive approach towards local law enforcement agencies.” The FOP duplicitously proclaims that Adegbile would “certainly exacerbate” divisions between law enforcement and minority communities –- the very communities routinely brutalized by police…abuse that is ignored by most U.S. Senators.

Police abuse remains a rampant problem in Philadelphia, where a civil rights organization recently requested a federal investigation. While Senators Casey and Toomey loudly demand sanctions against Russia for its alleged breaking of international law, the state’s two Senators remain silent about police abuse in Philadelphia, Pennsylvania’s largest city, refusing to comment on their position on that request for a Justice Department probe of Philadelphia police.

Interestingly, a critical piece of evidence used to convict Abu-Jamal arose during an investigation into his complaint about police beating him during and after his arrest.

During that investigation, which was conducted two months after Abu-Jamal’s 12/81 arrest, two policemen suddenly “remembered” that they had heard Abu-Jamal shout out a confession. One of those two policemen had filed a report hours after Abu-Jamal’s arrest stating that Abu-Jamal had made “no comments” during the entire he was assigned to guard him, yet this was the same period during which this officer later claimed Abu-Jamal had confessed. When asked years later in 1995, under oath, why he had neglected for two months to report such critical confession evidence immediately, that officer lamely claimed he “didn’t realize it had any importance until today” – a preposterous explanation nonetheless accepted as fact by state and federal courts upholding Abu-Jamal’s conviction.

Opponents of Abu-Jamal have waged scorched-earth campaigns against him and those who believe he received a legally unfair trial and appellate review. U.S. Senators, in the early 1990s, successfully barred NPR from airing Abu-Jamal commentaries on prison life by threatening it’s public funding. Conservatives used Abu-Jamal in 2009 to tar White House advisor Van Jones, forcing his ejection from the Obama administration. Jones, a lawyer, had, years earlier, called for a new trial for Abu-Jamal.

Philadelphia U.S. Congressman Chaka Fattah called the Senate rejection of Debo Adegbile a “travesty.” Fattah has been targeted for political retribution by Philadelphia’s FOP because he supported a fair trial for Abu-Jamal.

“This action by the Senate may influence the willingness of lawyers to represent clients in unpopular circumstances,” Fattah said. “America’s justice system works on the adversarial process with good lawyers on both sides…”