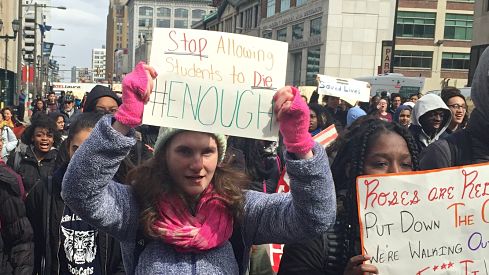 'Walkout' march in Philadelphia – a city where school officials did not penalize participants. LBWPhoto

Ten days before American student outrage over gun violence triggered multitudes across the U.S and around the world to join in “March For Our Lives” protests; many U.S. high school educators and other adults provided students with strident lessons in assholelisity.

During the March 14, 2018 National School Walkout Day staged by students to show sympathy for the victims of the February high school massacre in Florida, administrators and adults employed threats and punishments to squash students from protesting against the lack of gun control measures across America – the nation with are more guns than people.

School administrators asserted reasons for their harsh response to Walkout participants that went from claims of maintenance of order inside schools to contentions that the Walkout was a political statement that had no place in schools.

A student at a high school outside of Philadelphia, Pennsylvania saw “hypocrisy of the highest order” in administrators cracking down on participants in the National Walkout. At the school this student attended, administrators slapped over 200 protesting students with detentions that required coming to school on Saturdays.

“They tell us in announcement everyday to be the change you want to see in the world. And then when we tried to do it, they told us we couldn’t,” Pennridge High School student Anna Sophie Tinneny told a reporter.

While many school officials nationwide did not oppose the determination of students to participate in the National School Walkout Day, the reactions of some school administrators and other adults to that protest oozed assholelisity.

The degree of one’s assholeness is a general definition of assholelisity. Widely used definitions for the slang term asshole reference someone who behaves in a stupid way, more mean-spirited than just annoying.

Assholelisity evident across America ranged from detentions to suspensions to the absurd.

Officials at a school in Kansas City, Missouri tagged Walkout participants’ truants and hit them with punishments.

A student in Hilliard, Ohio was slapped with a one-day suspension because he stayed in his classroom doing homework instead of participating in either the walkout or going to the area school administrators designated for students not participating in the walkout. That student said he wanted to stay neutral neither supporting what he saw as gun control in walking out nor disrespecting the Florida massacre victims by going to a school ordered study hall. Hilliard school officials said the student received a suspension for not following orders to leave the classroom that was locked with him inside.

In Coecur d’Alene, Idaho pro-gun advocates who openly carried assault rifles, some with images of the American flag on the bullet magazines in their rifles, confronted student protestors.

Some school administrators even told Walkout participants they would jeopardize college admission through receipt of school issued discipline. That threat prompted strong pushback from many colleges including Ivy League institutions.

That National Walkout provided a prime ‘teachable moment’ where educators could have expanded understandings about the First Amendment focusing on the rights-&-responsibilities of that amendment’s five provisions that include a right to protest. Instruction on constitutional rights could have unpacked facts like the Second Amendment is not sacrosanct, existing beyond any restrictions like those routinely imposed on First Amendment freedoms.

One caustic critic of the National School Walkout Day was a board member of the school district that includes the Pennridge High School in Bucks County, Pennsylvania where 200+ students received detentions.

According to published reports board member Joan Cullen stated on Twitter that “it’s very important the public know the truly radical, anti-police, anti-U.S. government nature” of both the Walkout and the upcoming Women’s March. Cullen, according to an article posted on philly.com, also re-Tweeted a message where a person labeled the student protesters as “misinformed Marxist truant peers.”

In 2015 when Cullen successfully campaigned for her school board seat she pledged to do her best to make Pennridge High School a “great place to learn” according to published accounts. Cullen pledged to evaluate issues from multiple angles to determine solutions that were “good for all.” 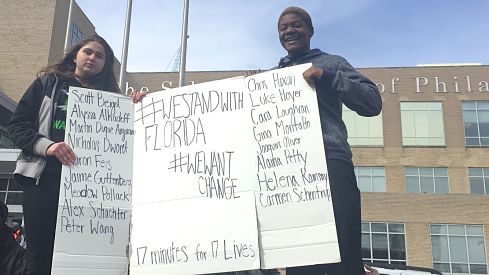 While curbing gun violence was a key issue for student participants in both the recent March For Our Lives and the earlier National School Walkout Day, other students, particularly those attending inner-city schools, advocate ending debilitating deficits in resources available for their education.

Ivan Torres, a 9th-grade charter school student in Philadelphia, Pennsylvania offered a common sense suggestion as he waited outside the School District of Philadelphia headquarters for the start of the March 14th Walkout march down to that town’s City Hall.

Torres said, “Stop putting money out for more police in schools and put more money into books and better conditions in schools.”

Torres and many others feel adults haven’t been “responsive enough” to violence plaguing schools and a lot of other pressing issues.

The same day Torres protested with students from across Philadelphia, the U.S. Congress finally responded to that Florida school shooting, that triggered subsequent outcries from students to do something, with passage of a measure to dump millions of dollars into supposed school security improvements like more metal detectors, better locks and safety training.

However, that congressional measure did not include a single gun control provision – continuing the child-like and yes, cowardly avoidance of addressing the issue of too many guns with too little restrictions.

Oh wait: Kids like Torres and the hundreds of thousands who marched in the Saturday March 24 Our Lives protest are giving a whole new meaning to that term “child-like,” showing that it means courageous and smart, and wholly more admirable and mature than what most of our current politicians have on offer.

As witness the handcrafted, heartfelt signs carried by some students in that Philly Walkout protest had messages begging for gun control like “The Founding Fathers Didn’t Have Automatic Weapons” and “Stop Allowing Students To Die.”

And those Harrisburg lawmakers, who receive taxpayer salaries to protect the lives of all Pennsylvanians, continued to bar Philadelphia and other local governments statewide from approving mild gun control measures for their particular areas like requiring the reporting of a stolen gun – reportage that is required for stolen cars.

Students know that approval of enhanced background checks for gun purchases are measures that would protect the sanctity of school safety thus enabling students to live to grow into voting age.