There was an old 1978 Saturday Night Live skit that hit dangerously close to the truth about how modern US society deals with those it fears. Steve Martin, playing a 12th century judge, Theodoric of York, is confronted with the case of a woman, Lorraine Newman, charged with being a witch. With the townsfolk calling for her to be burned at the stake for “consorting with the devil,” he says the only way to determine her guilt or innocence is to put her in the “trough of justice” — a deep vat of water into which her bound body will be cast. Theodoric advises the woman that she has “nothing to fear” since if she is guilty her body will float, rejected by the waters of justice, but if she’s innocent she will sink. When her body sinks, leaving just a few rising bubbles which indicate she has drowned, Theodoric announces: “Ah! Not guilty!” Leaving her in the tank, he then moves on to the next case.

The trial of Pvt. Bradley manning has far too much in common with this skit to be funny. Manning, a young man of principle who said he had decided to release hundreds of thousands of documents exposing the true brutal nature of the US war on Iraq and the so-called war on terror, as well as the self-serving crudeness and imperial corruption of US global diplomacy, stood accused in a military court of hugely inflated “crimes,” including causing death and injury of American troops, aiding the enemy, harming America, and treason. The judge, Col. Denise Lind, proved to be an even a more ludicrous mockery of justice than Martin’s Theodoric of York. Blatantly promised a big promotion by the Obama Pentagon as an inducement to assure her reaching a guilty verdict against Manning, she assured that the trial was conducted largely in secret, and denied all efforts by the defense to have Manning freed based on the year he spent being tortured and held without charge by his military captors in what was a transparent effort to get him to cut a deal blaming his document release on the organization Wikileaks and its founder Julian Assange.

In the end, Manning was tossed into the trough of justice and found duly guilty of all but the most specious and overblown charge of “aiding the enemy,” and was left to face a possible 90 years in jail which, for a 26-year-old man, would be a life sentence. 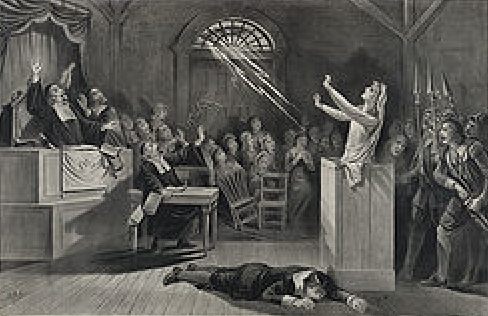 At that point, Manning had two choices. He could stand his ground, insist as he had through the course of the trial and earlier in his on-line chats, that his actions had been motived by the noble goal of exposing the crimes of the military and the government, and take the consequences, or he could lie, claim that he had been deluded, mentally ill, and the victim of parental abuse, and plead for the mercy of the court. Understandably, given the way the authorities had stomped on him for the past several years, Manning chose the second alternative and made a fawning and pathetic apology for all his actions, and begged for mercy. Rather than sink to the bottom of the trough of justice, he allowed his body to float, in hopes that he would not be burned at the stake.

It remains to be seen whether the judge or a higher authority will respond to his abject submission to the government’s will by giving him a lighter sentence, or whether he will nonetheless be symbolically burned at the stake by being locked away in Leavenworth for the rest of his life. Either alternative is possible.

But whatever happens, the government has won by crushing this honest and noble whistleblower, who merely did what was actually required of a military person: to report and to make every effort to expose and stop war crimes, and to defend the US Constitution.

Now, with Pvt. Manning disposed of, the focus of the Obama administration’s Salem on the Potomac repression will shift fully to National Security Agency whistleblower Edward Snowden. Currently in Russia, which has granted him asylum, Snowden must live in constant fear of being snatched, or perhaps “disappeared” (as some US intelligence official have indelicately put it) by US agents. At the same time, he is accused by no less an authority than President Obama of somehow being less than honorable because he won’t come back to the US and defend himself in court.

The implication is that if Snowden really thinks what he did in exposing the NSA’s wholesale surveillance operation that monitors all the electronic communications of the entire American population, and much of the rest of the world as well, was a good thing, he should be willing to put that perspective to the test in a court of law and accept the consequences, just as Martin Luther King Jr. was willing to go to jail in Birmingham fighting for civil rights for black people.

The problem is that at least back in the 1960s and 1970s, civil rights and anti-war activists knew that at the higher levels of the federal courts had people like William O. Douglas and Thurgood Marshall, and other lesser lights who were willing to stand for real justice. Besides, the prison time faced by civil rights protesters were tallied in days, weeks or at most months. Today’s freedom fighters, like Manning and Snowden, face years, life in prison, or worse, for their actions.

The “choice” being offered to Snowden by President Obama, his “Justice” Department and the charlatans in Congress who are denouncing him for treason, is between hiding out in Russia, or coming home and being railroaded into prison, preferably after first being crushed like Manning to the point that he first admits his “guilt” and then pleads for mercy.

Snowden’s father, retired Coast Guard officer Lon Snowden, who is traveling to Russia to visit his son, is right to advise him not to even think of returning to face trial. “The well has been poisoned,” he has said of American “justice.”

For those who challenge the American police state in these increasingly dark days, facing “justice” means going before some unfunny version of Steve Martin’s Theodoric of York.

Snowden should stay put in Moscow, and avoid the American “trough of justice.”