London – The many criticisms of capitalism leveled over a century ago by Karl Marx, the co-author of the Communist Manifesto, may prove to be more right than wrong.

Evidence both anecdotal and empirical of many of Marx’s observations abounds across London, the city where the German-born Marx, who held a doctorate in philosophy, lived for three decades before his death in 1883.

Income inequity – an element of the capitalism Marx criticized – is at historic high in Britain as in the US.

The richest ten percent in Britain live 100 times better off than the poorest, according to a report published last year in the Guardian newspaper.

In London, the richest capital city in Europe, 41 percent of children live in poverty, according to statistics listed in a Museum of London exhibit. 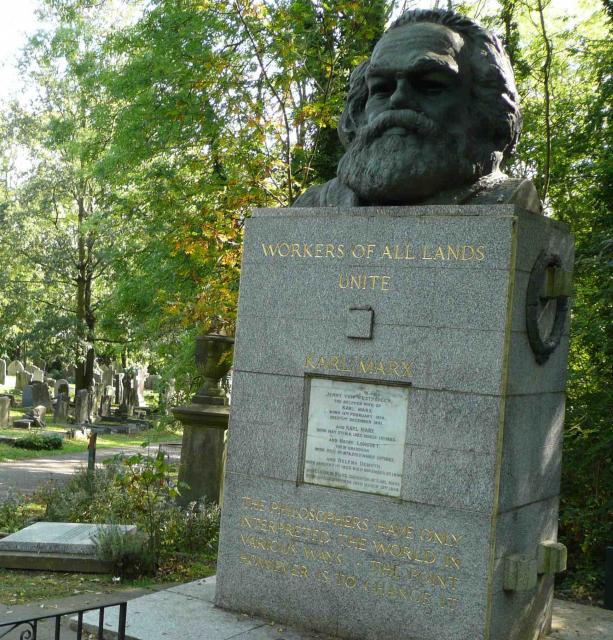 Marx spoke of the immiseration of the workers, and today's capitalists are proving him right (Washington photo)

Homelessness steadily increases around London due largely to recession-related deprivations like unemployment, which lead to loss of shelter, according to reports from social service agencies and the news media.

A homeless man often sleeps on the side-walk in front of a hi-end Hugo Boss clothing store located on the main shopping street in London’s posh Chelsea section, where the average home price is $1.9-million in U.S. dollars.

The home prices in London’s Chelsea section mirror home prices in New York City’s upscale Chelsea, a community located not far from NYC’s Wall Street, currently the scene of mushrooming protests against the greed and inequities spawned by capitalism.

The sleeping location for that homeless man in London’s Chelsea is across from the entrance to the Sloan Square Tube Station of London’s fabled Underground.

Prices for privatized home energy soared across Britain between 2004 and 2009 with electricity prices leaping over 75 percent and natural gas soaring 122 percent.

George Durack, 87, who chairs a Pensioner’s Forum in one London community, told a news reporter in September that elderly people confront a ‘heat or eat’ quandary due to escalating energy prices compounded by cuts in energy assistance to retirees by the conservative lead national government.

“People are going without meals – it is that bad,” Durack said in that interview published in London’s Evening Standard newspaper. “There are pensioners dying because of fuel poverty. It’s horrible.”

In that same article the chairwoman of London Council’s Transportation and Environment Committee said, “Fuel poverty is a real and growing danger to low-income families in the capital. With rising living costs and fuel bills, more households face a miserable winter fighting off the cold.”

“I talked with my barber, asking him about the recession’s impact on his business. He reluctantly admitted that business is down. Customers he used to see each week now come every few months,” said Adebayo, who writes a regular column for The Voice, Britain’s leading black newspaper.

“People are showing up at my door asking to sharpen kitchen knives and offering other services. These are signs of tight times.”

The name Karl Marx, for most Americans, is synonymous with evil (Marxism=Communism) not with salient economic insights.

Many Americans who embraced Marxism have endured political harassment and even imprisonment over the years, despite America extolling its First Amendment constitutional right providing citizens with freedom of speech, freedom of association and freedom to protest against government policies.

Civil rights/human rights activist Jones had risen to a position on the National Committee of the Communist Party of the USA by 1948.

Marx predicted that bourgeois society would collapse because those “who work, acquire nothing, and those who acquire anything do not work.”

The massive collapse of western economic systems during the past few years results in large part from the risky/reckless schemes of wealthy to expand their wealth, this aggravated by their then receiving massive government bailouts to cover their greed-based looses. Those bailouts required gutting resources important to the middle and lower classes.

Last month the International Monetary Fund issued a report warning that the global economy had entered a “dangerous new phase” due to economic woes wrecking the Euro Zone and the United States.

The IMF predicted “weak and bumpy expansion” for the economies of developed countries like the United States, which have been savaged by get-rich-quick schemes hatched by Wall Street financial power players – who like their counterparts in England – have not been held accountable for their misconduct and crimes.

While mitigating the devastation of financial fraudsters, the mantra for both Britain’s conservative and liberal political leaders emerging from their respective annual national party conferences recently is holding the poor more accountable for doing more for helping themselves through reducing governmental aid.

Britain’s conservative party Prime Minister David Cameron and liberal Labour Party leader Ed Milliband both pledged to crack down on England’s “something for nothing society” with stern measures like slashing government assistance to the unemployed who are not seeking work (even work hours from their homes) and denying government-assisted housing to the long-term unemployed.

Karl Marx once quibbled that “the rich will do anything for the poor but get off their backs.”

After attending the Wall Street occupation, Dr. Johanna Fernandez, a professor at a New York City university, said those protests contain the pulse of anti-austerity/anti-authoritarian protests she’s personally observed in Europe and the Middle East this year.

“What is amazing about these [Wall Street] demonstrations is that they look exactly like demonstrations I saw in Jordan last spring and in Spain this past summer,” Fernandez said.

Karl Marx once stated that “capital is reckless of the health or lengths of life of the laborer, unless under compulsion from society.”