A few weeks ago, I got a vivid comparative look at how far this country has moved towards becoming a police state. The occasion was a brief visit to Montreal, where my wife was to give a harpsichord recital at an early keyboard music conference.

At the Canadian border crossing, just above Lake Champlain, the Canadian official politely asked us our purpose in coming to Canada. Informed it was to perform harpsichord music at a music conference, he actually asked my wife what composers she was playing! (It was Gaspard le Roux) I tried to imagining even being asked such a question by an American border official and simply couldn’t. The Canadian officer also asked us if were were bringing anything in with us. Told that we had a keyboard, he asked if we planned to sell it — a fair question for a customs official. Then, assured we’d be bringing it back home with us, he waved us through with a smile.

On our way back into the US, we found ourselves being questioned by a grim-faced, beefy, cop-like guy, complete with sidearm, about where we’d been and what we’d done in Canada. Now this is getting draconian. We are both US citizens traveling back from home from a visit to a country that is about as close an ally to the US as a country can be. There is no reason why an immigration official, having looked at our passports, should be asking us about our activities while in Canada. Hell, I could have said I was attending a conference on promoting world socialist revolution, or a global meeting of some white supremacist organization. It wouldn’t matter. He’d still have to grant us entry. I have every right to attend such political meetings in the US with impunity if I want to, and I have the same right as a US citizen to attend them abroad too.

The stupid thing, of course, about such questions, is that if I actually were doing something illegal — say passing stolen state secrets to a spy connection in Canada, or meeting with some terrorist organization to plot a bombing in the US — I certainly wouldn’t offer that information to a border patrol officer.

So why would we be asked by a border patrol official to report what we had been doing in Canada? 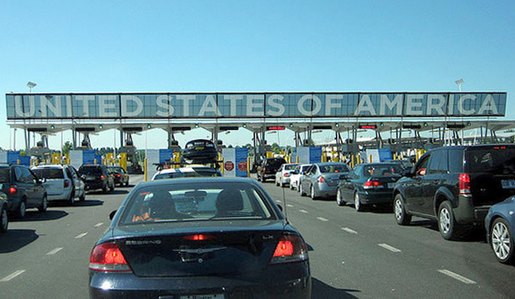 Lines of cars carrying US terrorists returning from training in Canada wait to cross the US border just south of Montreal, so they can head down to New York City. Luckily, alert border guards ask each driver what they did in Canada before letting them back into the country.

The only reason I can come up with is intimidation. We were being shown that our behavior as US citizens is being monitored, and that if we do things that the government finds bothersome, we will be questioned and monitored further. It wouldn’t surprise me that if I had actually attended a conference on promoting world revolution during my trip and had lied about it by saying all I’d done was attend a music conference with my wife, I could be accused of committing the felony of lying to a federal border official. It is, after all, a felony to lie to an FBI agent — something that itself is incredibly draconian when you stop and think about it.

There were other differences too, of course (besides the much better roads up north, and the government-funded health care), between Canada and the US. Central Montreal is undergoing a lot of renovation at the moment, and given that it has a grid of one-way streets, with many of them temporarily closed at various points it can be difficult to maneuver one’s vehicle to a destination, or in our case, to find our way out of town to the highway back to the US border. But trying to locate a Montreal cop we could ask for directions was a challenge. While driving around for half an hour looking in vain for the way out of town, I didn’t see a police patrol car once. And no cops were to be seen patrolling on foot either.

Compare that to any US city. On my latest trip to New York, which has 50,000 cops for a city of 8 million people, I saw cops everywhere I looked (often in pairs!): in Penn Station and the Port Authority Bus Terminal you can see the next cop from whatever cop you’re standing nearest to, and often armed National Guard troops too. Up on the street, police cars and cops on foot are ubiquitous. So are videocameras. The same is true here in Philadelphia, where there are so many police driving around it’s hard to drive five blocks without seeing one.

Philadelphia, a city with a population of 1.5 million, employs over 6600 police officers. Montreal, a city of 1.8 million, in contrast, has only 4000 cops, and that’s counting senior officers. To match Philly in cop density, Montreal would have to hire 3920 more cops, about doubling the size of its department. New York has 8 million people and 50,000 cops. To match its cop/resident ratio of 1/160, Montreal would need to almost triple the size of its police force.

America is awash in police. Even in my neighborhood, a suburb of Philadelphia called Upper Dublin — a peaceful place with very little crime and almost no violent crime, with a population of 26,000 — there are over 40 police officers. That’s one officer for every 650 people! These cops spend most of their time sitting around near intersections nabbing people for rolling stops and minor speeding violations, or dealing with accidents.

There’s also been a police hiring frenzy going on. It’s not just more police getting hired, but more to “serve” the same population. For example, in 1992, there were 332 cops per 100,000 residents. By 2008, that had risen to be 373 cops per 100,000 — a total of 772,000 full-time, sworn uniformed cops with a license to kill and an increase police density relative to population of over 12%. Increased police hiring has continued apace (as has funding for prisons) even as the nation’s cities and states struggle with tight budgets and cut funding for schools, libraries and other needed services.

Friends in Canada tell me their own country is becoming more draconian of late under the conservative government of Stephen Harper. We certainly saw that on display in Toronto in 2010 as militarized city and national police brutally confronted protesters at the G-20 economic summit event held there. But there’s no question that things are much more advanced towards a police state here in the US.

Certainly if you have to tell a border agent what you were doing abroad before you can be waved back through into your own home country, things are going in a very bad way here.