London, UK — Police and prosecutors scheme to secure convictions of persons who did not participate in any crime. Racial minorities disproportionately bear the brunt of this improper practice.

Sounds like too many cities across the United States.

However, this practice of racist law enforcement is also rampant in three of the largest cities in England, including the capital city of London, according to a report released recently by the Centre For Crime and Justice Studies of Manchester Metropolitan University.

“The key findings [indicate] the criminal justice system is more flawed than we might imagine,” states the conclusion of the report entitled “Dangerous associations: joint enterprise, gangs and racism.”

The study documents that claims by police in Britain that young blacks dominate gang membership and thus are demonstrably the most violent are incorrect. Police and court data cited in the report document that black youth were not those who committed the most serious youth violence. In London for example, police list blacks as 72 percent of that city’s gang members. But official data collected for the report stated non-blacks committed 73 percent of the serious youth violence in London. 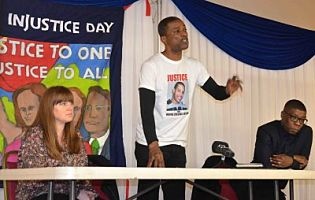 Tottenham rights activist Scott with report co-authors Clarke (left) and Williams (right) -LBWPhoto
The report found that prosecutors during trials of youthful suspects seize upon on the gang label levied by police to create a sinister perception of criminality that boost prosecutors chances of obtaining convictions. Prosecutors often push non-crime related ‘evidence’ such as listening to rap music and texting friends, particularly in cases where the defendant was not at the scene of the crime…or even where the defendant may not have known a crime would ever occur.

“The language of gangs is conflated with serious violence,” report co-author Becky Clarke said when presenting findings of the report during a presentation at Parliament attended by members of both the House of Commons and the House of Lords. Clarke is a Senior Lecturer in the Sociology Department of Manchester Metropolitan University.

Clarke’s co-author colleague, Patrick Williams, noted during an earlier presentation that “just because someone is from the same area and is a certain color does not make them a gang member.” Williams, a Senior Lecturer in Criminology at Manchester Metropolitan University, said there are racially prejudicial purposes in the gang labeling done by police in Britain.

The report leveled particular criticism at Britain’s infamous Joint Enterprise Law, an enforcement mechanism that is literally ‘guilt by association.’ Under this law imprisonment can occur for a crime that the person did not commit or even know about. While the report found disproportionate use of Joint Enterprise against blacks, there is also a class-based application with JE with its use often against working-class and poor whites.

Center researchers Clarke and Williams called JE part of a “process of criminalization” that they said is rooted in race and class.

One often cited outrage under Joint Enterprise was the conviction of a blind teen whom friends took for a walk during which one person in the group scuffled with an older man, resulting the death of the drunken adult who, according to the evidence, had instigated the confrontation. Police and prosecutors asserted the blind teen, who is white, should have fled the scene by himself when he heard the fatal encounter escalating, despite his inability to see.

Patricia Brown knows the pain of flawed, race-driven JE policing/prosecution. Her eldest son Tirrell Davis is serving a life sentence for a murder that occurred in March 2007 when he was at home. Davis saw a fight while walking home from high school but left the scene. A fatal stabbing later that day, which occurred during a continuation of that fight, led to Davis’ arrest and JE conviction despite his complete non-involvement in that stabbing.

“The head of the jury at my son’s trial was a police sergeant! How does that happen?” Brown said. Brown a member of Joint Enterprise Not Guilty by Association. JENGbA is an activist organization pushing for the repeal of JE.

During the presentation of the Centre for Crime and Justice Studies report inside a meeting room in the Parliament building, both liberal and conservative members of Parliament criticized the law.

Stephen Pound, a liberal Labour Party MP, said, “We haven’t said enough about the suffering of people swept up with this absurd law. [JE] is wrong at every level. This is injustice writ large.”

Another liberal member of the House of Commons, Andrew Slaughter, stressed that even families of murder victims are critical of JE. “Victims want to see people punished. But they want the right people punished, not just convictions of anyone and everyone.”

Investigative committees of Parliament have twice issued reports critical of JE. During that presentation of the Centre’s report, Lord Beith, who served on one investigative committee, said evidence indicates that JE reforms promised by the Crown Prosecution Service have been inadequate.

“Police officers are telling the public that you can be convicted weather you know of a planned crime or not. That contradicts claims by prosecutors and the government that [JE] needs knowing foresight,” House of Lords member Beith said. The JE law requires that a person charged had knowledge of the crime before it was committed – the foresight requirement.

Centre researchers Clarke and Williams presented findings of their report at a community meeting in the Tottenham section of North London the night before their presentation in Parliament. Tottenham is where an August 2011 fatal police shooting of a black man sparked rioting that spread from London to cities around England.

Stafford Scott, the veteran rights activist in Tottenham who hosted the community meeting, said reading the report gave him the sensation of having seen such findings too many times before wit failures by repeated governments – conservative and liberal – to effectively address racist law enforcement.

“Blacks and minorities are disproportionately effected by the way the state uses its power sources,” Scott said.

“The young are given sentences longer than they have been on earth for crimes they didn’t commit. We need to get this Joint Enterprise law removed from the books.”