A presidential candidate, nakedly pandering prejudice to win votes, holds a pivotal campaign rally in a locale infamous for a bloody incident of white racist violence.

Sounds like President Donald J. Trump’s decision to schedule a campaign rally in Tulsa, Oklahoma, the site of one of the worst incidents of mass racist violence in American history.

However, decades before Trump’s Tulsa ‘Dog Whistle’ to bigots in his base, the icon of the modern Republican Party – Ronald Reagan – launched his successful 1980 campaign for the U.S. presidency in Philadelphia, Mississippi, the locale of a brutal racist incident that inspired passage of the federal Civil Rights Act of 1964.

Thinly disguised bigotry underlies the Trump campaign’s selection of Tulsa as the site for the President’s first rally since the COVID-19 lockdown as surely as bigotry was an operational element in the selection of Philadelphia, Mississippi for Reagan’s speech that formally launched his general election campaign in 1980.

In May 1921, rampaging whites destroyed the prosperous Greenwood community in Tulsa known as the ‘Black Wall Street’ with burnings and bullets. Those rampaging racists received assistance from police in Tulsa.

Trump and top officials in his administration claim racism is not a core part of contemporary policing in America. Their contention defies the historic record.

The grand jury that investigated the 1921 Tulsa Riot declared there was “no mob spirit” by the whites who systematically conducted arson and murder in the Greenwood community. That grand jury white-wash defies the fact that Tulsa, in 1921, was home to the largest Ku Klux Klan chapter in Oklahoma that included a women’s auxiliary and a rare children’s chapter.

Trump received a KKK endorsement during his successful 2016 campaign. He tepidly distanced himself from that endorsement after widespread criticism for his failure to immediately disavow endorsement from that racist organization.

In June 1964 racists murdered three civil rights workers who were then in Mississippi as part of a campaign to register African Americans to vote in that state where decades of systemic discrimination viciously denied blacks their right to vote. Police aided those racist murderers.

The bullet riddled bodies of those civil rights workers – two whites and one black –were discovered buried in an earthen dam just a few miles from where Reagan delivered that August 1980 speech.

The phrase state’s rights was the rally cry of Southern segregations who assailed federal intervention to protect the constitutional rights of blacks. According to segregationists that Reagan courted, it was states, not the federal government, that had the right (authority) to determine which citizens of a state had the right to receive the full measure of constitutional rights. State’s rights was synonymous with rights for whites only.

Weeks after Reagan’s speech that pandered to segregationists, civil rights leader Jesse Jackson blasted the future president…whose presidential tenure secured repeal of many advances made during the civil rights struggles of the 1960s and 1970s.

Rev. Jackson, in a published commentary, stated, “When Reagan proposes a cutback in the role of the federal government a return to “states’ rights,” as he did in Philadelphia, Miss., where three young civil rights workers were murdered, we’re concerned. For Black people, “states’ rights” means “states’ wrongs.” While the federal government never has been all it should be, state and local governmental policies historically have been the most racist and least just, the most corrupt and mean spirited.”

Reagan, adding further insult to the injury of his 1980 appearance, returned to Philadelphia, Mississippi during his 1984 reelection campaign where he declared that “the South shall rise again.” Like the support for state’s right pronouncement – Reagan’s Dog Whistle statement in 1984 applauded the discredited Confederacy.

Trump also defends his declared posture as a “nationalist.” While Trump did not put white in front of nationalist, his policies and practices reek of white supremacy that drove the Confederacy. Trump’s selection for federal judges, for example, have been overwhelming white just like fellow Republican, Reagan.

Reagan, affectionately known to his fans as ‘The Gipper,’ exhibited jarring similarities with Trump. 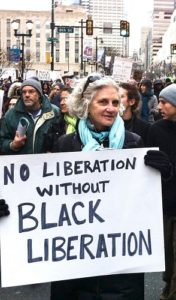 Reagan said he was a photographer in the U.S. Army during WWII and had filmed Nazi death camps in Europe. Reagan was in the military, but he served in the reserves, where his mission was making training films in Hollywood. Reagan, like Vietnam War dodging Trump, never fought in actual war time battle.

Racism is a reason why Reagan did not forthrightly address the domestic terrorism faced by African Americans from police brutality. Months before police in Philadelphia, Mississippi participated in the murders of those civil rights workers, Dr. Martin Luther King Jr. blasted police brutality in his stirring “I Have A Dream” speech.

Reagan’s failure to attack abusive policing kicked the can of brutality into the 21st Century where Trump failures to address lawlessness by law enforcers have inflamed cities across America during recent weeks.