I never expected to find myself agreeing with Sarah Palin, but I’ve got to admit that the woman nailed it regarding President Barack Obama’s State of the Union Address. Asked to comment on it, she said it had a lot of “WTF moments.”

That’s exactly what I found myself thinking as I read through it!

We’ve “broken the back” of the recession? WTF? The official unemployment rate is still 9.4%, and even that is down slightly from a 9.8% high only because so many people have given up trying to find a job and have left the workforce, taking early retirement or just staying home. And the real unemployment rate–the one that counts those who have given up but would work if there were actually jobs to be had, and those who have grasped at part time work just to survive–is still at between 19% and 22%, depending on how you’re counting. Who’s Obama kidding: us or himself?

We need to “out-educate” the rest of the world? WTF? All across the country, school districts are laying off teachers. In New York City, the country’s largest school district, the world’s richest mayor, $18-billionaire Michael Bloomberg, recently hired corporate hack, Cathleen P. Black, a former magazine publisher who has no educational experience or training, but who does have a reputation for whacking employee lists, as his new school chancellor, and has put out the word to teachers in New York, including those who have earned tenure through years of dedicated work, that their jobs are on the line because of a lack of money. In Philadelphia, another or the country’s largest districts, principals have been warned to prepare for 20-30% budget cuts next school year–this in a district where 40 kids to a classroom the norm, and where kids still study from dog-eared history and science textbooks dating to the 1970s and ‘80s. Obama also talked about the need to focus education on science, math and technology. WTF? What about foreign languages? What about history and political science? What about the arts? If he had actually checked what happens in China–a country he warned was outdoing us in educating its kids–he’d have discovered that music and art are key parts of every kids’s education, and that kids start learning foreign languages when they are little–not in high school. Same in most countries like Korea, Taiwan or Germany, all of which are eating our lunch in global economic competition. 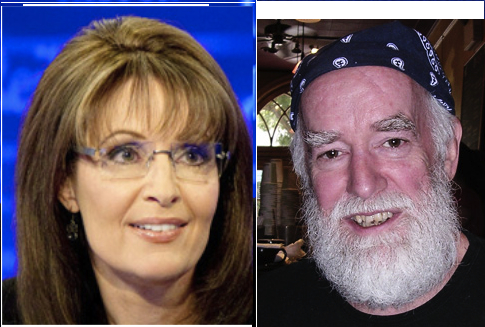 Dave and Sarah, listening to Obama's State of the Union, both say WTF?

Oh, and that $10,000 one-time college tuition tax credit you called for? WTF? Most state colleges have raised their tuitions by more than that over four years just in the past year, thanks to the budget crunch they’re all facing because of declining tax revenues from the continuing recession you say we “broke the back” of.

We’re going to “break our dependence on foreign fuels” by switching to biofuels and by “putting half a million electric vehicles on the road”? WTF? Everyone with an ounce of knowledge knows that biofuels are a fraud, requiring nearly as much energy input–usually from natural gas–to produce as they create. And as for electric cars, they depend upon generated electricity which is produced either by imported oil, or by burning maximally dirty coal. This is not change we can believe in, or even want. And while we’re at it, “clean coal”? WTF? Sounds like dry water, fat-free lard or courageous politican.

The tax code is rigged by corporate lobbyists you say? WTF? Then why did you just hire GE’s CEO and Chairman Jeffrey Immelt as your jobs czar–a guy whose company has not only not paid any corporate tax for the last five profitable years, but has actually had a negative tax rate averaging 14% per year (10.1% in 2009)? Immelt managed to get the government to take our tax money and ship it to him by the trainload as credits, even though his company, one of the largest in the world, is highly profitable. Oh, and he’s been closing GE’s American factories at a prodigious rate and shipping the jobs to China and India and other cheap-labor countries.

You signed trade agreements with South Korea, India and China, and plan to sign more with Panama and Costa Rica, in order to boost jobs in the US? WTF? These agreements, like the ones before, notably NAFTA, demonstrably destroy American jobs.

He said we’re going to cut Medicare and Medicaid. WTF? The huge Baby Boom population is just heading into retirement age, with the first Boomers just now reaching 65 and eligibility for Medicaid, and you think you’re going to cut the program? Over my (our) dead F bodies! Just try it Barry! That’s a fantasy. You think those mobs in Cairo look scary? Wait until you try and cut Medicare! The streets of Washington will be jammed with people armed with walkers and canes.

But my biggest WTF moment came when Obama came to the deficit. He has bought into the Republican argument that something has to be done right now to stem America’s decades-long bleeding of red ink, and to do that, he proposed freezing the “domestic” budget for five years at the 2008 level. WTF!!!

First of all, that’s sure to push this foundering economy right back into a deeper recession. Already, state and local governments, having burned through the federal cash they got in 2009, are starting massive layoffs of public employees–including teachers–which will have a tsunami effect on further slumping demand and killing off business recovery and private hiring. This will make that situation even worse. But the real joke is that by using the code word “domestic,” the president was exempting the military. Oh sure, the White House previously announced it is “cutting” $78 billion in Pentagon spending over the next five years, but in a budget that is about $1 trillion a year, counting debt for prior wars, veterans’ benefits, and intelligence agencies, $16 billion a year is pocket change–not even close to the annual rate of inflation. Besides, it’s all BS, since Obama is certain to turn around and ask for more supplemental budget requests from Congress to fund the endless wars in Iraq, Afghanistan, and–the way things are going–in Pakistan, Yemen, Iran, maybe Egypt, and who knows where else?

You cannot hope to restore the US economy to health, and to repair our shameful education system, our decrepit infrastructure, and our country’s position in the world, unless you confront the rampant militarism that has gripped and bankrupted the nation since the end of WWII.

We’re “shaping a world that favors peace and prosperity?” WTF!!! America is the biggest threat to peace and prosperity in the world today. And by the way, the insurrections that are spreading across the Middle East are against regimes that the US has been propping up with military weapons and training for decades. It’s all coming undone now and you’re talking about our great military successes?

Sarah Palin had it right:

The Real Immigration Scandal
The far-right is focused hard on making a scandal of the current rush of refugees from Central America north through Mexico to our Southwestern border. It’s as if the refugee…
All John Grant's Posts

Krasner’s stance on Mumia won’t cost him re-election, but it will stain his reputation as a reformer
By Linn Washington, Jr. and Dave Lindorff Philadelphia District Attorney Larry Krasner deserves credit for ending the wrongful incarcerations of nearly 20 people. Krasner did what many of his predecessors did…
All Dave LIndorff's Posts

Racism in British News Media - The Missing Story
[caption id="attachment_5681" align="alignright" width="300"] March in London (2011) against brutality by police in Britain. LBWPhoto[/caption] On Saturday October 29, 2011 over 500 people from across England protested near the Parliament…
All Linn Washington's Posts