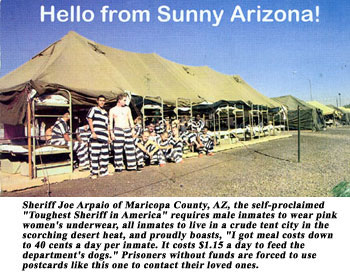 “Arpaio was aware of the anti-immigration reputation of the American Freedom Riders [motorcycle group] and the public use of racial epithets by their members,” states a charge in that lawsuit.

Earlier this year, the federal judge handling this lawsuit announced he would impose sanctions on the Maricopa County Sheriff’s Department for destroying evidence in that case.

That destruction included deleting emails about patrols plus throwing away and/or shredding documentation about traffic stops made during the sweeps.

“The Sheriff’s Office acknowledged not maintaining records as they should,” the ACLU’s Pochoda noted.

“They conveniently lost stat sheets that enable us to document the nature of traffic stops to show the stops were pretextual stops based on race. Although the U.S. Supreme Court allows police to make stops, if the main motivation is racial they can’t initiate the stop.”

Pochoda said that a “mountain of emails” that Sheriff’s officials claimed had been destroyed last year were recently discovered by other Maricopa County officials and are now being reviewed for release to the legal team in that lawsuit.

In 2006, Pochoda said, the Arizona Highway Patrol entered into a settlement to stop racially profiling Latinos and African-Americans as part of anti-drug enforcement efforts.

Although advocates of this immigration crackdown deny that race prejudice drives their anti-Mexican campaign, common sense compels the conclusion that Arizona authorities will direct little enforcement against the five-percent of the illegal immigrants in America who come from Canada and Europe.

Despite official denials, Arizona’s immigration crackdown covertly enables police use of ethnic characteristics like facial features or listening to Spanish music as a basis for providing them with the ‘reasonable suspicion’ legally required to lawfully demand documentation from persons to determine if they are in the U.S. legally.

Arizona officials sternly declare their police will not use repugnant racial-profiling when enforcing their crackdown on illegal immigrants.
However, that pledge rings hollow considering the lawsuits filed against police profiling in Arizona.

Since Sheriff Arpaio’s office in downtown Phoenix is a mile from the Arizona Capitol along the same street, anti-profiling declarations by Arizona’s Republican governor Janet Brewer are suspect given her failure to corral Arpaio.

Gov Brewer, whose office is in the Capitol complex, hasn’t cracked down on police brutality by Phoenix city police against Latinos and African-Americans.

In March, Phoenix City Councilman Michael Johnson, an African-American, accused a Phoenix policeman of using excessive force against him. The officer claims Johnson, a retired Phoenix policeman, hit him requiring his subduing and handcuffing the Councilman. The incident occurred while Johnson was talking with a neighbor victimized by a house fire.

Prejudice stains the U.S. history of racial profiling as a law enforcement tool.

A federal judge, in 1988, castigated the Arkansas State Police for violating his order to end profiling against Hispanics during Clinton’s long-tenure as Arkansas Governor.

Republican President George W. Bush seized on long-standing criticisms from blacks and Hispanics about prejudicial police profiling as a campaign plank, promising to eliminate the practice if elected in 2000.

Yet, following the 9/11/01 attacks, Bush eagerly expanded racial profiling beyond Drug War targeting to include enforcement against Arabs, Muslims and South Asians under his War on Terror.

The United Nation’s Committee On The Elimination Of Racial Discrimination, in March 2008, criticized the Bush Administration for its “increase in racial profiling” against Arabs, Muslims and South Asians.

In August 2005, the national ACLU and several prominent civil rights organizations unsuccessfully called for a federal investigation into an apparent attempt by the Justice Department to bury a government report detailing racial profiling by police against blacks and Latinos.

That 2006 settlement of the racial profiling lawsuit involving the Arizona Highway Patrol occurred during the Arizona gubernatorial tenure of Janet Napolitano, who now serves as Obama’s head of Homeland Security, that vast federal bureaucracy that includes immigration enforcement.

During America’s Civil War, the then Territory of Arizona joined the Confederacy. Alabama was a core Confederate “state.”

The March 1861 Arizona Ordinance of Secession declared that the territory
seized from Mexico during an 1848 war, “…naturally belongs to the Confederate States of America…by ties of common interest and common cause.”

It’s as wrong of course to broad-brush a majority of white Arizonans as bigots as it is to suspect persons of Mexican ancestry of being unlawful aliens.

Illegal immigration may cause some problems in America but unleashing police to maraud against non-whites is not the solution.

Violating the rights of lawful Arizona citizens of Hispanic ancestry to ferret out undocumented immigrants is wrong.

Curiously, Arizona ranks only sixth on the list of states with the largest undocumented immigrant populations, having far less in sheer numbers than list topping California and Texas.

President Obama is right calling for immigration reform at the federal not state levels – a call Republicans and many Democrats on Capitol Hill resist.