Shenid Bhayroo was one of the thousand-plus journalists that traveled to South Africa in December 2013 to cover the death of iconic South African leader Nelson Mandela, the former political prisoner and first black president of the southern-most nation on the African continent.

Most of those journalists representing nations worldwide covering the memorial activities for Mandela, reporting on the ‘mood’ in that country, missed the mood Bhayroo saw among many South Africans.

Bhayroo saw a strong public dissatisfaction with the deep poverty rampant across South Africa, poverty many South Africans increasingly blame on failures of the ruling African National Congress (ANC), the organization Mandela once led. Many studies list income inequality in South Africa as highest in the world, citing such figures as the poorest ten percent averaging $427 in annual income compared to $80,800 for the richest ten percent.

“What I saw was a greater sense of criticism of the short-comings of the ruling party, even from staunch ANC supporters,” Bhayroo said referencing rising objections including criticisms of corruption and nepotism among ANC officials, particularly South African President Jacob Zuma. “There’s been little improvement in the lives of the working poor.” 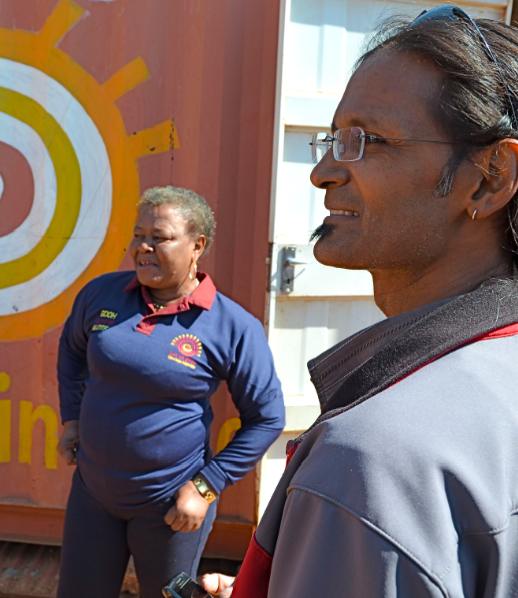 Shenid Bhayroo (r) and Rose Thamae at Thamae’s anti-AIDS/anti-poverty organization in the impoverished township of Orange Farm outside Johannesburg. (WashingtonPhoto)

Bhayroo, a freelance videographer, grew up in South Africa under the racist apartheid system, living in a segregated area adjacent to Soweto, that township on the outskirts of Johannesburg where Mandela lived before his early 1960s arrest and 27-year imprisonment by South Africa’s then white minority government. Dr. Bhayroo, who holds degrees from two American universities, is now a journalism professor living in the United States.

That pivotal mood change noticed by Bhayroo and others could bode ill for the ruling ANC in the May 2014 general elections. The ANC has ruled South Africa since the first post-apartheid election in 1994. Experts expect the ANC to retain its ruling position albeit with fewer seats in the National Assembly and provincial legislatures.

South Africa, very similar to the U.S., has more people eligible to vote than who actually vote.

‘Educated’ Mosi was a member of the ANC’s military wing, living years outside of his homeland in exile. He suffered a gunshot wound in Angola during a 1980s battle against American CIA-funded rebels that were fighting in alliance with South Africa’s apartheid government. Mosi is among the ANC supporters dissatisfied with the policies and practices of that party.

“Too many ANC leaders now drive Mercedes Benz cars. They don’t do things for the poor,” trade union member Mosi said, critical of top ANC officials for engaging in self-enrichment, a repugnant practice of elites worldwide. 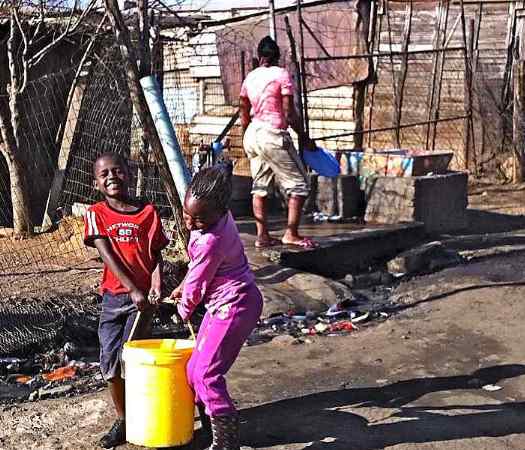 Children carry water from a communal faucet in the Kliptown shantytown adjacent to Soweto. Most dwellings in Kliptown lack water, electricity and indoor plumbing. Kliptown is where the Freedom Charter was approved in 1955 calling for the end of economic inequities that still plague that community. An open sewer runs past the communal faucet. (WashingtonPhoto)

“The ANC has political office, but the economy of the country is still in the hands of white people,” Mosi said during a July 2013 interview in the impoverished township of Alexandria located adjacent to the most wealthy enclaves in Johannesburg, the largest city in South Africa. “People in South Africa are still poor. Some still sleep on the streets.”

The May 2014 election marks the first time that most of the ‘Born Frees’ (persons born after the end of apartheid in the early 1990s) are eligible to vote in a general election. That election will determine who serves as South Africa’s president. However, a recent “Status of Youth Report” released by South Africa’s National Youth Development Agency found that young voters, with few exceptions, “are regularly less likely actually to turn out on Election Day than other age groups.”

While the rigid racial segregation of apartheid ended formally with the 1994 multi-racial election, gross inequities engrained dating from the mid-1600s arrival of European settlers in South African remain evident in that country that is now a part of an increasingly influential economic confederation that includes Brazil, China, India and Russia known as BRICS.

Persons inside and outside of South Africa see economic problems radiating from the failure to overturn the old economic order during the negotiated transition from apartheid to democracy in the early 1990s. Those negotiations between ANC leaders and the apartheid government left most big business ownership and employment positions essentially unchanged. A further detriment was the ANC had to assume the massive debt incurred by the apartheid government (to sustained that system) in order to insure receipt of new and needed loans from western financial institutions.

Monteiro faulted the ANC for not standing up to apartheid-era elites and their western economic backers to implement its Freedom Charter that demanded economic equity. For Monteiro, instead of a “radical redistribution of wealth and income…a program of neo-liberal capitalism and protection of western corporate wealth and white South African interests [was] implemented. In return blacks got the right to vote and modest improvements in the lives of the poor…the suffering of the working masses and poor got worse…”

South African Kenny Takalo wondered if “we were too generous” when ANC leaders negotiated an end to apartheid that did not include more equitable changes in South Africa’s economic system. “The younger generation asks where is the benefit of that generosity?”

Since the ANC took the reigns of South Africa’s government in 1994, that party has taken unprecedented steps to alleviate the negative impacts of apartheid – like building more than one million housing units.

“There is a narrative that the ANC has failed to deliver services and that is inaccurate,” South African Institute of Race Relations Researcher Lerato Moloi said. She noted that sharp increases by the ANC government in items like expanding access to electric and water service are “quite impressive and that is not known in South Africa.” The SAIRR is a non-partisan research and policy organization founded in 1929.

One thing the ANC did was to expand government funded social welfare programs, including direct cash payments. Those programs helped lift millions out of extreme poverty. But jobs creation has lagged, in-part from an inefficient educational system.

Nkosi Patrick Molala, a legendary soccer star, anti-apartheid figure and community activist in South Africa, is among many concerned about the grave economic inequities in his nation like 50 percent unemployment about black youth. Molala praises the positive changes for the poor that have occurred under ANC leadership but for still feels structural change has been slow – too slow.

“Much in the ‘Rainbow Nation’ that we claim is the same as before: Those who were poor then are poor now,” Molala said.

Molala, a leader of the South African soccer Legends organization that works to help current players and youth, holds the dubious distinction of being the first soccer star in his nation imprisoned for anti-apartheid activities. Molala served eight years on infamous Robben Island – the bleak prison that held Mandela and other leading opponents of racist rule in South Africa that the U.S. federal government and corporations backed for decades.

Following Molala’s release from prison in 1985, he became deputy president of AZAPO, the Azanian People’s Organization, a strident anti-apartheid entity. During one protest he led after prison, a police tear-gas canister struck him in the face, blinding him in one eye.

Post-apartheid South Africa is a “democracy of those who can make it,” Molala said during an interview last summer.

Rose Thamae, an AIDS/anti-poverty activist in the impoverished Orange Farm township, said lack of employment opportunities and poorly run government funded programs plague her community located about 40-miles south of Johannesburg. Thamae became an anti-AIDS activist after a rapist infected her with HIV in the early 1990s. Rape and other sexual violence in South Africa are among the highest in the world.

Thamae credits Shenid Bhayroo’s journalism coverage when he worked for the South African Broadcast Corporation for helping her grassroots “Let Us Grow” organization obtain funding and other assistance. The AIDS work performed by Thamae’s organization includes providing in-home care for AIDS patients who endure a shunning-stigma in South Africa that leaves them isolated.

While working for the SABC as a producer and reporter in the 1990s, Bhayroo covered the contentious Truth and Reconciliation Commission proceedings that examined offenses during the apartheid era.

During that coverage Bhayroo encountered the South African security agents who had ‘interrogated’ him as a result of his trade union and community activism during the 1980s.

“Those interrogations involved abuse, physical, mental and emotional,” Bhayroo recounted publicly for the first time. “For many of us it was a dark time during apartheid, a dark time.”