This example, interestingly, occurred on the day of the second anniversary of Philadelphia’s implementation of decriminalization, the enforcement practice that replaces arrests for marijuana possession with issuance of traffic-ticket like citations. That enforcement change has saved the City of Philadelphia at least $9-million in costs related to arrests and adjudication for marijuana possession, according to calculations by local analysts.

The airport discovery of a small amount of marijuana in the luggage of three-time Philadelphia GOP mayoral candidate Sam Katz resulted in embarrassment for Katz but not his arrest and court proceedings. Authorities issued a $25 citation to Katz that allowed the nationally respected municipal-finance-expert-turned-award-winning-documentary-filmmaker to continue to Florida for a planned fishing trip. 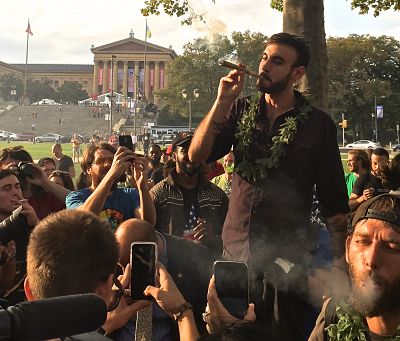 “Decriminalization has been a resounding success for the municipal government and for cannabis consumers in Philadelphia,” PhillyNORML official Chris Goldstein said. Goldstein, an expert on cannabis policy, writes a weekly column on cannabis issue for philly.com, the news website for Philadelphia’s two daily newspapers.

Days before the decriminalization of marijuana possession anniversary in Philadelphia, a report issued jointly by Human Rights Watch (HRW) and the American Civil Liberties Union (ACLU) called on federal and state authorities to decriminalize personal use and possession of drugs due to the documented failures of the War on Drugs. The two organizations recommended a shift from harsh enforcement to policies of prevention and harm reduction.

“Criminalizing drug use simply has not worked as a matter of practice,” stated the HRW-ACLU report. “Criminalizing drug possession has caused dramatic and unnecessary harms…both for individuals and for communities.” The report noted that police make more arrests for marijuana possession annually than for the violent crimes of murder, rape, robbery and aggravated assault combined.

Twenty-one states and the District of Columbia have decriminalized possession of small amounts of marijuana according to the National Conference of State Legislatures. Five states and DC have legalized adult use of marijuana.

A White House commission that studied marijuana in the early 1970s recommended decriminalization. However, then President Richard Nixon indignantly rejected all recommendations of his commission, which was chaired by a former federal prosecutor who had served as a Republican governor of Pennsylvania. Nixon is the president who launched the War on Weed that has consumed nearly $20-billion in federal funds alone since the early 1970s.

Decriminalization is also afoot abroad. For example, marijuana arrests are down 46 percent in England and Wales since 2010 according to a recent coverage by the BBC. Changes in police enforcement practices not governmental policies reportedly drive this reduction in arrests. 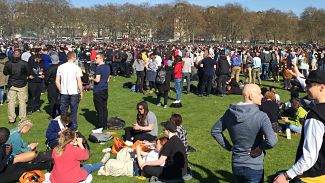 Of the 8,580 possession arrests in 2012-2013, 7,077 involved African-Americans. Police arrest data for 2015-2016 continue the racial disparity with African-Americans accounting for 1,200 of the 1,500 arrests. Many observers trace the race disparities in arrest rates to Philadelphia police targeting African-American communities for enhanced enforcement. Evidence of racial targeting is found in the fact that in many overwhelmingly white areas of Philadelphia police make no pot possession arrests despite decades of documentation that whites and blacks use marijuana at similar rates with the white usage rate slightly higher.

The second anniversary of decriminalization in Philadelphia saw a unique celebration near the iconic Philadelphia Museum of Art. Hundreds of decriminalization supporters publicly smoked marijuana at 4:20 p.m. to commemorate the anniversary. That smoke-out crowd was both racially diverse and inter-generational with persons 60-plus mingling with fellow marijuana users decades younger.

Philadelphia Mayor James Kenney sponsored the city’s decriminalization ordinance in early 2014 when he was an At-Large member of Philadelphia’s City Council. The legislation then Councilman Kenney introduced specifically cited the disturbing racial disparities in pot possession arrests as a key reason to implement decriminalization.

“I’m really proud that I was a part of an effort to make the city that I love safer for cannabis consumers,” Poe said.