North Jefferson County, Kansas — The Sept. 6, 2014 Kansas State Fair debates in Hutchinson, with a maximum arena crowd of 2500, had satellite trucks linked to MSNBC, CNN and reporters from as far away as New York. Certainly proof something was happening in Kansas, but for too many in the state that “something” remains unknown.

The “something” is easily found, though, by shaking any distracted screen grazer, instructing them to google “Traditional Republicans for Common Sense” and informing the techno-dummies that the holiest of holy, the Republican Party of Kansas, is split. Over 100 trusted, life-long members of the “Traditional Republicans” have stood up in name and print against Brownback’s Great Cornpone Revolution.

The True Believers in the New Republican Party of Kansas are a mixed-blood group, part Tea Party, part “conservative” libertarian, with a sprinkling of government conspiracy freaks and “pro-life” religious zealots, many secretly funded by the infamous “non-profit” Wichita plutocrats like the Koch brothers.

The New Republican Party was long in coming; I date it to before the abortion wars of former state Attorney General Phill Kline, but the 2010 elections parovided the decisive battle. That was when the True Believers took over and started targeting their own party members for political oblivion. 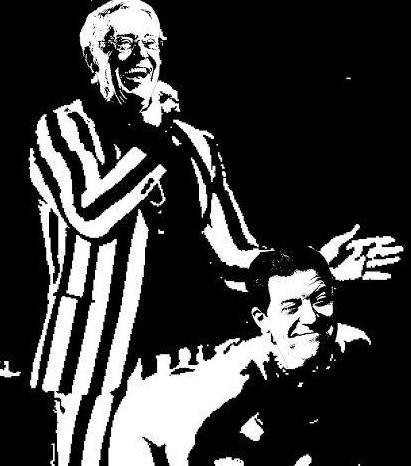 Horrified political observers across the state watched what has been called a Kansas “Night of the Long Knives.” Led by Gov. Sam Brownback, who received over $250,000 in open direct contributions from the Wichita-based Koch plutocrats, a nightmarish coalition of John Birch Society-styled “libertarians”, “pro-life” theocratic fascists and “free market” neo-conservatives reached a critical super-mass in the Topeka state legislature.

In the months before the 2012 election, Republican legislators who had made public minor disagreements with Brownback and his True Believers over birth control, budget cutbacks, tax cuts, renewable energy and redistricting were systematically targeted by a well financed secretive network of operatives.

One case among many was Rep. Bill Otto (R-9th) of tiny southeast LeRoy, Ks. who had served for eight years in the Topeka statehouse, never received Koch donations or been a member of the American Legislative Exchange Council (ALEC) but who is a long-time “pro-life” Republican. 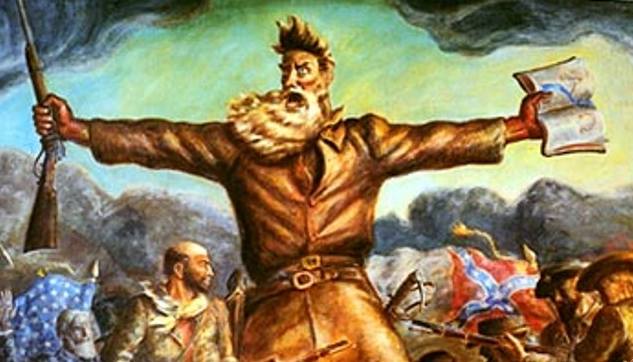 Kansas politics has a long history of both radicalism and lunacy. Both are coming to the fore these days (John Brown mural in the Kansas Statehouse)

Otto had several small skirmishes with Brownback’s True Believers over the public employees’ pension fund, rural public schools and mental health programs and is perhaps the most grassroots victim of Brownback’s scorched earth policy. His constituents received repeated mass mailings of postcards saying he cared for “pigs more than babies.”

A man who had won election after election and campaigned on a Theodore Roosevelt theme of “The No Bull Zone,” Otto traveled the 75 miles to Olathe where the postal permit “office” was listed. He found a UPS mailbox that had been cash rented for a couple months and was unable to identify the vacated owner without a court order.

A prominent life-long, but now former leader of the Kansas Republican Party reported on condition of anonymity to this reporter that an estimated $20 million was spent in broadcast ads and postcards against him and others leading up to the 2012 election.

The Hutchinson debates exposed for all to see the huge divide now in the Kansas GOP; like daylight after a howling, wind-filled night of lightning, when a dear old tree ends up lying splayed upon the ground.

Brownback and Roberts smeared and stammered, all the while showering the true believers in the audience with reliable trigger words like “Obamacare”, “Nancy Pelosi”, “Harry Reid”, the “farm pond” and yes, even the “prairie chicken.”

Ah, the seldom seen, poor miserable low-flying prairie chicken, once shot by long firing squads along the state’s mowed gravel roads, joins the black president as bullet words to be spit out at those who do not agree, speak well of, or vote for the New Republicans of Kansas.

Gov. Brownback twice used the term “prairie chicken,” bellowing, “He (challenger Rep. Paul Davis) wants to stop farming in a third of the state.” Just how crazy are these true believers in the New Republican Party of Kansas? Fear, the best tool to move the obedient and stupid, has silenced common sense in Kansas.

Gubernatorial-candidate Rep. Paul Davis did not wither under incumbent Gov. Sam Brownback’s non-stop “Obama” word play or his prairie chicken namecalling. It’s not too hard to stand tall under fire when the state’s credit score has been lowered three times on Brownback’s watch while school, county and health care budgets have been gutted.

Would someone around here think about this contradiction? Statehouse news reporters just a few weeks ago in August hurriedly gathered around the governor, during the last credit downgrade, to hear him say, “cutting taxes is always painful.” But did anyone ask, “Painful for whom?”

Now Brownback bombs us with television ads of himself shown sitting in front of head-nodding old folks, saying “the sun is shining in Kansas.”

Who in hell around here thinks this isn’t a giant stinking con-job?

The outgunned candidate for governor, Rep. Paul Davis, pointed out that Sam still has a presidential exploration committee operating, but he notes that one of the members of that committee hailing from Texas is under criminal indictment.

Shawnee County Prosecutor Chad Taylor, meanwhile, the Democratic Party nominee for US Senate, claims now that he does not want to be in the election against Sen. Pat Roberts, as he has a cop killer to convict in Topeka. (Actually, Taylor was polling so badly behind independent Greg Orman, that the national Democratic Party pressed him to back out of the race, much as happened in the governor’s race in Alaska.) But Secretary of State Kris Kobach, a Republican, is confident Kansans are stupid and will vote for Mr. Taylor, if he can just keep Taylor’s name on the printed ballots.

Independent candidate Orman of Olathe, Ks., debated Sen. Roberts in Hutchinson and argued what is plain to many, that both big political parties in Washington, DC have stopped governing for the people.

Orman was yelled down by Republican stalwarts and had to start his opening statement three times before Sen. Pat Roberts shushed the loud, heckling True Believers.

Orman continued listing the failures of Washington, DC during the last decades, and pointed out several times that the two major political parties only agreed when making disastrous decisions (See “Senate Votes to Arm, Train Syrian Rebels to Fight ISIS”).

Sen. Roberts, not understanding this, repeatedly called out the name of Harry Reid, playing the same tired name blame-game that Brownback had used against Davis in the previous debate.

Sen. Roberts, 78 years old, after over forty years in DC, seemed distant and answered questions with stock phrases like; “secure the border” or “take that hill” or “no amnesty.” Is this how he wants to fix the “humanitarian crisis” of defenseless migrating kids stumbling out of the desert to escape murdering dictatorships? He calls out “Harry Reid” again.

Sen. Roberts claims a reclining chair and some renters at an address in Dodge.

Roberts’ quickly challenges him on the number.

Orman uneasily answers with “maybe four” times, Roberts’ confidently rebuts “seven” and then says, “I won that one.”

Yes, you won that one, Sen. Pat Roberts.

I predict the incumbents will not want any more debates.

I hope I am wrong.

You be the judge and listen to the debate click here.

UPDATE: 1200hr., FRI., 19 Sept. 2014 SoS Kobach is now demanding the Kansas Democratic Party to place any candidate’s name on the ballot, and a registered Democrat David Orel of Kansas City, Ks. has filed a lawsuit against his own party demanding the same. Orel’s son is a regional field director for Gov. Sam Brownback’s re-election campaign.

UPDATE: 1700HR., FRI., 19 Sept. 2014 SoS Kobach who has placed over 20,000 voters in “suspension” now requires federal Department of Justice officials to wait another week to approve final draft on the official statewide voting ballots.The Caddells at the family print shop in Brownbackistan

MIKE CADDELL, a native Kansan steeped in the state’s largely forgotten but powerful tradition of prairie radicalism, is founder and editor of the Fightin’ Cock Flier and of Radio Free Kansas. He wrote this article for ThisCantBeHappening! Mike lives in Nortonville, KS with his son Tristan and his equally (or more?) radical wife, Dr. Kris Neuhaus, who has lately been battling an anti-abortion witch-hunt by Brownback and his medieval anti-woman appointees on the state’s Board of Healing Arts.