Charlene Scott cheered and chanted with the hundreds thronging Philadelphia’s Love Park during Saturday’s protest against conservative Republican onslaughts seeking to slaughter what remains of the living-standard comforts enjoyed by middle and working-class Americans.

But Scott had a different perspective than most attending that demonstration, which had been organized largely to voice solidarity with public workers in Wisconsin now confronting calculated attacks against their collective bargaining rights from that state’s Tea Party-aligned Republican governor.

Scott said she had seen this onslaught coming ten years ago.

That Philadelphia protest was one of hundreds around America that have surged during the past two weeks against the worker bashing/wealth redistribution onslaughts by conservative political leaders in state capitols and on Capitol Hill.

Less than 36 hours after that weekend protest, the Philadelphia Daily News revealed that a union-busting campaign is headed to Pennsylvania, the state with the nation’s fourth largest number of card-carrying union members. 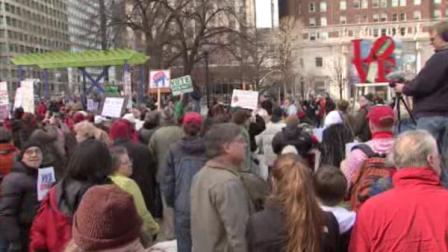 The planned campaign to attack collective bargaining rights of public sector workers in the Keystone State comes from an organization funded by the conservative Koch Brothers, who’ve poured hundreds of millions into building the tea party movement. Pennsylvania makes an attractive target because its voters just last November put Republicans in charge of both the Governor’s Mansion and the two houses of the state Legislature.

The man tapped to head the PA campaign, former Republican state legislator Sam Rohrer, is quoted in that Daily News article stating his belief that public sector employees do not have the “right” to collective bargaining or to strike.

The billionaire Koch Brothers, Charles and David, provided campaign contributions last year to then Republican gubernatorial candidates Scott Walker in Wisconsin and Tom Corbett in Pennsylvania, both of whom won election.

A number of other states, like Indiana and Ohio, with Republican governors and legislatures, are already pursuing efforts to eliminate collective bargaining by public employee unions.

A recent Gallup Poll found that 61 percent of those surveyed nationwide oppose the elimination of public worker bargaining rights, however those polled who identify themselves as Republicans favored such elimination by 54 percent.

While Pennsylvania’s Gov. Corbett is not openly emulating Wisconsin’s Gov. Scott Walker by calling for busting public employee unions, he has said he does support allowing workers at unionized companies to opt out of being members. Further, Corbett supports barring public school teachers from striking, according to that Daily News account.

Any effort to mount a union-busting legislative effort in Pennsylvania will face stiff opposition from people like construction worker Gilbert Mookie, a Hawaiian native, who attended that Love Park protest to support unions and beleaguered workers in Wisconsin.

“The only way to stop what is going on is to unite. Things aren’t getting any better,” said Mookie, wearing a hard hat, flip-flop sandals and a Hawaiian flag wrapped around his lower body.

Deceptively described fiscal conservatives like Pennsylvania’s Corbett and Wisconsin’s Walker justify balancing their state’s budgets on the backs of the non-wealthy by calling it “shared sacrifice.”

But Corbett is not sharing the sacrifice among his newly installed top staffers, whose six-figure paychecks are higher than those paid for similar positions under former Pennsylvania Gov. Ed Rendell, according to recent news reportage.

A Corbett spokesman defended the higher salaries, saying he was paying the “fairest market value” to attract the best available talent. Somehow that same argument doesn’t apply when it comes to hiring qualified state workers who belong to unions.

Wisconsin’s Republican Gov. Walker has demonized public workers in his state, claiming that their salaries and benefits are behind the Badger State’s budget deficits.

Yet weeks before Walker announced his draconian initiative to eliminate collective bargaining for state workers, he secured tax cuts for businesses – breaks that added $117 million to Wisconsin’s state budget deficit over the next two years.

“In a word he is a bully. Christie belittles the importance of teachers. To say that teachers are the problem without talking to them is wrong,” Prato said, referencing Christie’s posture of refusing to even dialogue with teacher union representatives unless they first agree to accept every single anti-teacher proposal he wants implemented.

Christie “made it to where he is through education,” Prato noted.

A former federal prosecutor, Christie attended a public high school in Livingston, NJ and the publicly funded University of Delaware.

The escalating demonization of teachers will surely exacerbate the alarming dynamic experts have reported for the past five years: almost half of those graduating from colleges with degrees in teaching leave the profession within five years, due mainly to poor working conditions and low salaries.

While conservatives’ rail about allegedly high salaries paid to teachers, studies show that teachers, who are required to have bachelor’s degrees to get hired and often to earn master’s degrees to keep their posts, usually earn less than prison guards, who do not need college and/or post-graduate degrees.

According to one national survey, mid-career prison guards average $60,880 in annual salary while the salary of mid-career college professors averages $58,876 annually.

In California, the state with the nation’s highest average salary for teachers, that figure is $59,825 compared to the average prison guard salary of $73,428. Lack of high school education is a consistent element in the crime-causing equation.

Philadelphia’s Charlene Scott criticized the class warfare that has been waged for decades by the wealthy through their conservative foot soldiers in the Republican Party, a damning reality that too many, from corporate leaders to media pundits, indignantly dismiss as reckless hyperbole despite an abundance of objective evidence to the contrary.

As workers, from classroom teachers to construction workers, struggle with escalating tax rates and stagnating incomes, America’s top thirteen hedge fund managers, each earning over $1-billion annually, enjoy low tax rates thanks to breaks secured by conservatives on Capitol Hill who have been showered with hedge fund campaign contributions.

America’s economic meltdown, which that snatched hundreds of billions of dollars in value from employee pension funds, is the direct product of greed-driven schemes hatched by hedge funds, big banks and Wall Street speculators.

Two days after that Love Park protest, an editorial in the Philadelphia Tribune lambasted GOP governors and state legislators for giving tax cuts “to the wealthy while attacking public employees,” forcing public workers into the perverse posture of fixing deficits that the Wall Street/corporate backers of those GOP politicians created.

“The repeated harangue about big government and “privileged” government workers being our nation’s biggest problem is as bogus as a herd of unicorns being corralled by tooth fairies,” that editorial declared.

It continued: “The poor misled Tea Party faithful are about to discover that unleashing Darwinian capitalism will not make them rich. Food will be taken from their children’s plate as well.”