Timing isn’t everything, but in politics it’s important, and the indictment of 12 Russian intelligence officials for allegedly being behind the supposed hacking of the Democratic National Committee in 2016 in an alleged effort to skew the election in favor of Donald Trump over Hillary Clinton, announced today by Mueller “Russiagate” probe overseer and Associate US Attorney General Rod Jay Rosenstein just before President Trump’s planned summit meeting Monday in Finland with Russian President Vladimir Putin — reeks of politics.

It is also rather thin on the announced evidence of a “hack” despite mainstream journalism’s breathless reporting that it the indictment cites “hard evidence” of such hacks.

In fact, little or nothing of what evidence is released — supposed use of a server in Malaysia, for example — proves anyting, since the Vault 7 release of CIA hacking tools last year showed that the CIA has developed software that lets its hacking teams disguise themselves as anyone, from a lone crank in a Chicago basement to a Russian GRU hacking team in Moscow. It’s all pretty meaningless — especially since to date the FBI has reportedly never even demanded to see, much less confiscate, the DNC’s servers, which could provide real evidence that they were, in fact hacked at all. 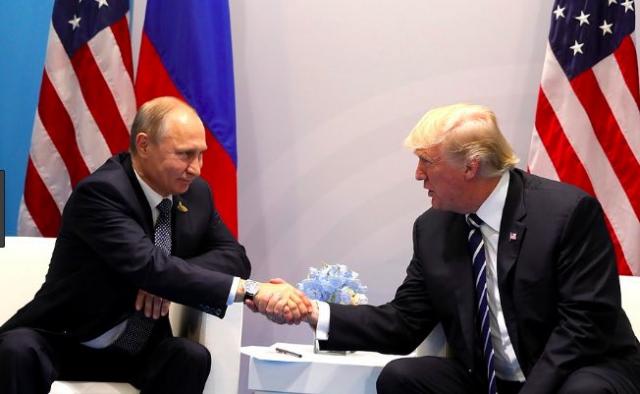 When two leaders, each with the ability to destroy the world, agree to get along, that's a good thing. Period.

As the Veteran Intelligence Professionals (VIP) organization, whose membership includes former NSA experts like William Binney, who helped design that agency’s internet tapping systems, have declared, their own investigation, which looked at download speeds of the DNC hack, showed that it couldn’t have been done over a remote internet cable, but had to have been an inside job downloaded onto a thumbdrive or portable hard drive.

So we’re no further down the road in the so-called Russiagate hacking scandal, but the indictment of a dozen persons who can never be interrogated and brought to trial because they are safely in Russia does effectively do one thing: it undermines any chance that President Trump might reach some agreement with his Russian counterpart Putiin to ratchet down the growing hostility between the two countries, as Trump repeatedly said during the 2016 campaign that he wanted to do.

Say what you will about Trump and his fascist tendencies — for example his monstrous policy of jailing people entering the US surreptitiously who have legitimate refugee status claims that should be properly adjudicated, and even worse, grabbing their children and separating them — a process which is continuing even as courts have ordered the return of at least those children younger than five to their anxious and imprisoned parents, or the threat to invade Venezuela. It can only be a good thing to ease tensions between the two nations on this planet who have the capability to destroy it and render it a smoking ruin incapable of supporting life thanks to their stockpiles of thousands of nuclear weapons.

Yet it seems clear that forces in what has been called the “Deep State” or the “Permanent Government” of the US appear hell-bent on preserving that state of hair-trigger edginess between the US and Russia, no doubt because it keeps the financial taps wide open for the arms industry, the Pentagon, the intelligence agencies, and the politicians of both parties who feed on the campaign funds (bribes) offered by the industries that stand to benefit from cold war and myriad small hot ones.

Meanwhile, we have the Democratic Party Establishment now demanding, in another effort to sabotage US-Russian detente, that Trump insist at any summit session, on a promise from Putin to “cease interfering” in US elections and politics.

This demand would clearly be laughed at by Putin, who knows that the US played a key role, spending as Secretary Clinton once stated, well over $1 billion in underwriting the subversion of Ukraine’s elected government and backing, if not helping to orchestrate, the coup that overthrew it in 2013. He knows too that it was US funding of Boris Yeltsin’s floundering campaign for a successful second term as Russia’s post-USSR Russian president that saved him from being defeated by a resurgent Communist Party-led coalition candidate. Of course he also knows what most Americans don’t: that the US has been the biggest transgressor in the world when it comes to undermining elected governments and befouling honest elections to achieve outcomes it prefers. Examples? How about the overthrow of Iran’s elected government in 1953 and the installation of the dictatorship of the Shah, the overthrow of the elected government of Socialist President Salvatore Allende Gossens in Chile in 1973, the cancellation of a UN-scheduled election in Vietnam in 1956 to prevent the nationwide election of Ho Chi-Minh, the support of a string of dictators in South Korea, the support of a short-lived coup that included the kidnapping of Venezuela’s elected president Hugo Chavez, the support and perhaps encouragement of a military coup that overthrew an elected president in Honduras, the kidnapping and exile to South Africa of the elected president of Haiti, Jean-Bertrand Aristide, etc. ad nauseum.

This is all to say that American democracy itself is becoming a joke, and not just because of the autocratic direction of President Trump. His Democratic and “Deep State” opponents are also resorting to undemocratic means to push their own undemocratic pro-imperial and pro-war agenda.

A real democratic movement to oppose Trump would require the Democratic Party, or some other opposition party, to stake out a truly progressive platform that would address the increasingly dire issues facing the American people and the world: universal access to health care, a secure retirement, equality of educational access for all people, including free university education, an end to the war economy and a slashing of the military budget to a fraction of its current trillion-dollar size, an end to militarized policing and mass spying on the citizens of the country, protection of the environment and a full-scale mobilization to attack apocalyptic climate change.

For now, even Trump haters like myself need to support the reaching, at this coming summit, of an end to Cold War 2.0. If Nikita Khrushchev and Jack Kennedy could agree to an end to atmospheric testing and could agree to remove short-range nuclear missiles pointed at each other from Cuba and Turkey, Trump and Putin should be able to and be encouraged to reach agreement on pulling back threatening forces on each others’ borders.

Oh wait! Russia doesn’t have threatening forces stationed along our borders. It’s just the US that, since Obama’s presidency, has been doing that to Russia.

Anyhow, let’s at least call the undermining of Trump on the eve of the summit by Democrats for what it is: sabotage.

As for “defending” our electoral system, the issues there are not Russian subversion. We’re killing out own democracy by allowing massive corruption in the form of corporate funding of candidates, by the ongoing effort to prevent poor and non-white citizens from voting, and by the totally pointless drive to use electronic voting machines to record and tally the votes of those who do manage to cast them, instead of just sticking with paper ballots, as is done in countries like the UK and Taiwan with great success.

Sure paper ballots take longer to count and provide us with the results of elections, but they are much harder to corrupt or “hack,” and what matters (except to television news companies hungry for ratings) is not speed but accuracy.