Independence Mall, Philadelphia — The US has yet to launch President Obama’s latest war crime of massively bombing Syria (a country that does not threaten this nation) and already federal police thugs, in this case National Parks Service Rangers, have violently arrested an Iraq War Veteran who was peacefully playing her banjo in the shade on Independence Mall in Philadelphia following an anti-war protest and march.

Emily Yates, an activist with the group Iraq Veterans Against the War (IVAW), and a professional folksinger and banjo player, can be seen in this video, peacefully standing plucking her instrument when she is ordered to move by a group of Park Rangers. When she asks them (politely) why she has to move off of federal park property that is open to the public, she is not given any explanation. Then at one point, she is grabbed from behind roughly without warning and slammed, bent over, across the wooden top of a park bench, with several large rangers pinning her down, and with her hands wrenched behind her back, as they try to place metal cuffs on her wrists.

As she struggles to breathe with all that pressure on her forcibly bent-over form, a senior officer can be heard telling her to “relax” and to “stop resisting” — though with three men piled on top of her, it is clear she is not resisting..

Yates was held in a federal lockup for two days before an arraignment on Monday, at which she was charged with disorderly conduct, resisting arrest and, most seriously, “assaulting a federal officer.” The latter charge, absurd when matched up against the video of the arrest, is a felony carrying a heavy jail sentence.

One is reminded of those black jokes about police ramming arrested persons head first into the sides of patrol cars and then charging them with damaging public property, or punching handcuffed victims in the face and then charging them with banging their heads into the officer’s fist. It is impossible to view the above video and see any evidence of “assault.” Nor could Yates have been assaulting the larger scrum of rangers who were all over her prone body later when she can be seen being held on the ground, screaming for help, as angry spectators shouted from the sidelines for the rangers to let her go, to “stop strangling her” and to call for a medic.

Yates’ attorney, Larry Krassner, offered TCBH! a statement on the case saying: “Emily is a six-year military veteran who served honorably for two tours in Iraq. She has PTSD. She was arrested and injured by federal officers for no good reason. The US government owes its veterans better treatment than this, even when they happen to be opposed to further war in Syria.” 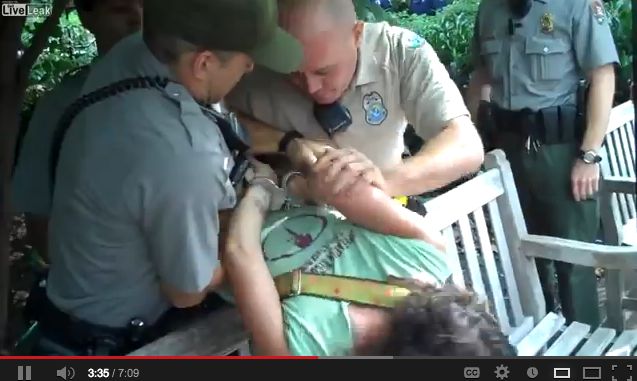 This is “resisting arrest” and “assaulting an officer”? So claim Independence Mall Park Ranger thugs in Philadelphia, who arrested banjo-playing Iraq War Vet and Syria Bombing protester Emily Yates and leveled those charges against her in federal court (click on image to see video)

I would add it owes its citizens, veterans or not, better treatment than this too, especially in this particular location, of all places.

Independence Mall is a three-block piece of property run by the National Park Service in Philadelphia. A favored spot for tourists from all over the nation and the world, with the restored Independence Hall at one end, where the Declaration of Independence and Constitution were written and where the Bill of Rights was passed into law, protecting freedom of speech and assembly, and the Constitution Center at the other end, where the US Constitution and its guarantees of freedom are celebrated, it is also a favored locale for protest actions, such as the protest and march against a US attack on Syria, which took place just before Yates’ arrest.

The brutal assault on this peaceful folksinger offers a stark view of the reality of America’s burgeoning police state, set as it was against the image of the building where America’s founding documents offered the hope for such a different kind of state. The park’s rangers Saturday certainly sent many foreign tourists home with a whole different view of the “Land of the Free” not to mention the “Home of the Brave.”

I’m reminded of my own arrest by a park ranger some 45 years ago, which went down quite differently.

It was the summer of 1968, and I was driving across the country from California to Connecticut in a 1946 Dodge pickup truck with a friend. We were earning our gas money along the way with my 12-string Guild guitar, which I would take out at opportune moments, setting the case open beside me and plucking my tunes. We were passing through beautiful Yosemite Park, and had figured it would be a good place to pick up some extra gas money before going through what we expected to be some rough territory for busking in Nevada, Utah, Wyoming and Nebraska, and so I sat down on the running board of the truck and began to play in the middle of the main parking lot.

I wasn’t begging. There was just a sign on the inside of the case top saying “Gas money”. People passing by were standing and listening and tossing in money and it was going well until a ranger drove up. He was an older guy, and didn’t look particularly happy about it when he said he had to arrest us for “panhandling.” (There was a real difference between this fellow, who clearly saw his job as being a custodian of a natural wonder, not a cop, and the young toughs working as rangers at Independence Mall, who look and carry themselves like club bouncers enjoying their power.)

Being an easterner, I asked the Yosemite ranger what panhandling meant. He said, “What you’re doing — asking for money.” I told him I thought panhandling meant cooking on an open fire in a pan, and I insisted I wasn’t asking for anything, but that people were coming up to us, not the other way around. But he said he’d been told to bring us in, so we were brought to the ranger station, where he wrote up two tickets. I didn’t look at mine until we were driving out of the park towards Nevada. Only then did I see the amount: $500! More than I had earned all summer working in Seattle. No wonder he had told us not to ignore our tickets, which he warned were federal offenses.

Furious at the unfairness of it, I wrote a letter to then Secretary of the Interior Steward Udall (the father of current New Mexico Senator Tom Stewart Udall), stating that I did not think it proper to fine someone short of money $500 for trying to earn some, particularly as I was merely entertaining people in a parking lot who were coming over to listen to me because they were enjoying the music.

I received my letter back in the mail a few weeks later. On it, in red felt-tipped pen, was a note saying, “I agree. The ticket has been cancelled. Stewart Udall.” And I wasn’t even a veteran. I was a long-haired hippy war resister.

What a far cry from the horror show that befell fellow folksinger and war veteran Emily Yates!

There was no indication that the ranger thugs who assaulted and arrested her on Independence Mall had any shame or reluctance about what they were doing. In fact, based upon their sworn statements at the arraignment, they were also willing to lie about what happened, to claim that this small, slightly built young woman was assaulting them, instead of the other way around.

The right thing at this point would be for Stu Udall’s successor, Interior Secretary
Sally Jewell, to do as Udall did and toss out her arrest, perhaps also disciplining her park goons and instructing them about the finer points of respecting the right of citizens, especially in Independence Mall, to exercise their freedom of speech and assembly.

Sadly I suspect Yates will have to go through some kind of lengthy and costly legal battle, while having her freedom of travel severely restricted (although supposedly innocent until proven guilty, she is under court order, as part of her bail conditions, to remain in either Philadelphia or her home city of Oakland, CA, except when traveling on business to perform at concerts), until as would seem likely based upon the above video and others like it, her case is either thrown out, or the government loses. And of course, she has to endure months of worrying that in what passes for justice in federal courts these days, she could even end up being convicted and having to spend years in jail, ending up a convicted felon.

I hope she gets off these trumped up charges, and that she files brutality charges against the ranger thugs who attacked her and violated her civil liberties.

I also hope those rangers, and the federal prosecutor responsible for charging her in Philadelphia, will listen to her song: Try Not to Be a Dick.