The mainstream media likes to claim that Occupy Movement is comprised of aimless activists without concrete goals. They should go ask Martha and Lorena Reyes, two recently fired Hyatt housekeepers who know exactly why the 1% who run everything need to be occupied and what the 99% is demanding.
Until recently, the two sisters worked for the Hyatt Regency in Santa Clara, CA. On October 14th, after 30 years of combined service, they were abruptly fired.

According to the Hyatt, they were terminated for “stealing company time.” The hotel alleges that they took ten minutes too long on their lunch breaks. The Reyes sisters explain that housekeepers are assigned so much work that they frequently do not have time to take their legally-mandated, 10-minute break in the morning. It is routine and long-accepted by management for them and their coworkers to take an extra ten minutes during lunch to replace their missed break.

The Reyes sisters believe that they were actually fired for a different reason.

Their story begins in September during “Housekeeping Appreciation Week.” On arrival to work, Martha was greeted with a collage of her and her coworkers’ faces digitally altered onto the bodies of women in bikinis. She was horrified and took down the picture of herself and her sister, Lorena.

Though it’s commonplace to see images of scantily clad women in the media, Lorena explains, “In my culture I was raised to be conservative with my body. I don’t like bikinis… I felt very uncomfortable knowing my male coworkers were looking at that.”

Shortly afterwards, both women were fired. 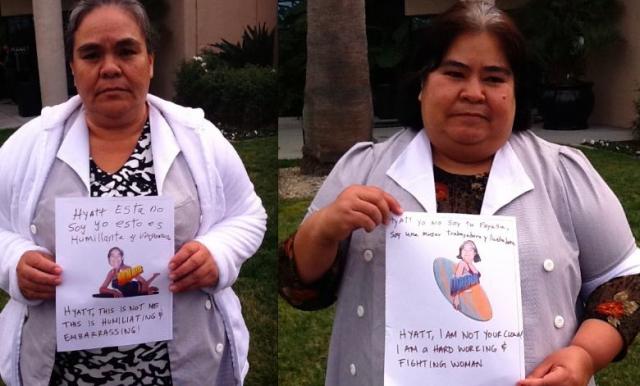 Standing up to the boss: Marta (l) and Lorena (r) Reyes

On November 18th, the Reyes sisters filed retaliation charges with the U.S. Equal Employment Opportunity Commission. Their lawyer, Adam Zapala, states, “[The Hyatt is] retaliating for [Martha and Lorena’s] opposition to their pictures. You have two long-term employees, with sterling work records, and then all of the sudden, they’re terminated. And they’re sisters. And then you go talk to other workers and they say they do this too [if they miss their morning break] and they’re not disciplined.”

Martha and Lorena allege they were fired for standing up for themselves. And it has cost them. Because her husband has been laid off, Lorena is the sole supporter of her husband and three children. Martha has five children as well as legal custody of three grandchildren. Like many Americans, without this job, she is also worried she will lose her home.

Victoria Guillen, a worker at the Grand Hyatt San Francisco, recognizes the pain that the Reyes sisters are experiencing. In February of 2010, Guillen was fired because she was unable to meet the Hyatt’s demand that she return to work only four days after having a medically required caesarean section because of her high-risk pregnancy.

Though these two stories involve different people and circumstances, the heart of the matter is the same: power. Martha explains, “I go to work and I’m very serious at my work. When managers ask us to participate in various activities I participate. But I feel in this case, management is abusing its power.”

Hotel management frequently relies on disrespect, humiliation, and fear to maintain power over their employees, power over wages, and power over benefits. Firing the Reyes sisters and Guillen sends a message not only to them, but also to their co-workers. If people can be fired for preventing inappropriately sexualized pictures to be displayed or for simply having a baby, surely behavior such as taking a sick day, demanding safe working conditions, or a living wage, would be punished with even worse.

What’s notable is that both hotels that the Reyes sisters and Guillen worked for are on the list of 17 Hyatt properties that workers, clergy, unions, and community members have been boycotting because of poor labor practices.

Additionally, separate from the Reyes sisters incident, the Hyatt Regency Santa Clara, is one of seven Hyatt properties where workers are fighting for a fair process for the workers to decide if they want to form a union. While other large hotel chains such as Hilton and Sheraton have already agreed to nationwide card-check neutrality agreements, where workers are able to win union certification by simply getting a majority of workers to sign cards saying they want a union, instead of having to go through a lengthy National Labor Relations Board certified election, the Hyatt refuses. (NLRB union certification voting under NLRB supervision is a process that has been historically fraught with intimidation and rule violations by management, particularly as there are no penalties for breaking the law beyond reinstatement of employees, which can take months or even years at best.)

When workers in Santa Clara announced their desire for a fair process in 2008, reports of worker intimidation surfaced immediately. One worker recalls having a manager close the door so that the two were alone and then inform her that she could get fired if she signed card in favor of a union—an action that is a clear violation of labor law.

Huy Tran, a former Hyatt bellman, describes how management “used a combination of things to scare people and bribe people.” He said when one of his coworkers expressed ambivalence about the union, “Suddenly he was assigned all the good jobs. Whenever Mr. Rice, the general manager, needed something personally, it was [him]. It was like an informal promotion.” Conversely, Tran, who was vocally supportive of a fair process and a union, found that “they stopped talking to me.” He says, “Whenever they did have to talk to me, it was terse and cold.

Nationwide, they Hyatt Corporation has had a less a history of than stellar labor practices:
In the fall of 2009, 100 housekeepers at three Hyatt properties in Boston, now referred to as “The Boston 100,” were fired on the same day and replaced with out-sourced workers. The incident was so egregious that even the Governor of Massachusetts threatened a boycott and the Harvard Business Review ridiculed the move.

A 2010 article published in the American Journal of Industrial Medicine reported that out of the four hotel companies that they analyzed, the Hyatt had the highest injury rate of 10.36 injuries/100 person years. That was nearly twice the baseline injury rate of 5.2.

To date, the Occupational Safety and Health Administration (OSHA) or its state counterparts have issued 15 citations at 10 different Hyatt hotels and 3 citations against one of the housekeeping subcontractors that the Hyatt uses. They allege violations of safety regulations and have proposed fines totaling $95,405.

Slowly, other Hyatt workers are speaking out as well. A recent Youtube video, Joey Quits, about a hotel employee quitting with the help of a marching band, went viral and has galvanized abused workers across the country. That employe has begun to collect testimonials in hopes of raising awareness of the “unjust working conditions in the hotel industry.” At the time of this writing, over one third of the contributions were from Hyatt employees.

Ultimately, the Hyatt Corporation is a concrete example of what the Occupy Movement is fighting. Before the Hyatt became a publically traded company in 2009, it was owned by the Pritzker family, members of which still own controlling shares. Eleven members of the Pritzker family were listed in the Forbes 2011 list of “The Richest People in America.”

And though Hyatt has claimed that firing “The Boston 100” was financially necessary, just the month before, the CEO, Mark Hoplamazian, had been given $1,662,500 worth of company stock as a bonus. Three months later, he was given another 105,00 shares which were worth approximately $3.16 million
.
The Hyatt, Hoplamazian, and the Pritzkers are the “1%.” And though Martha, Lorena, Victoria, Huy, Joey, and the 100 housekeepers in Boston might not be camping out every night, they are the “99%” and they are fighting.

With the help and support of her coworkers, Victoria Guillen protested her termination and her job has since been reinstated. But to Victoria, even though she might have her job back, the fight is far from over. As long as workers are treated unjustly, she will continue to fight with them through delegations, protests, and petitions such as the one Martha and Lorena started demanding that their jobs be reinstated.

Victoria recalls a famous saying from Tupac Amaru II, the famous leader in Peru’s fight for independence. She states, “We will fight until we relieve the last man on the ground. I will fight and I will triumph until the last bullet is done.”

Lorena summed it up best, “I think [the Occupy Movement] is great. They are fighting corporations to stop abusing workers and to give them their fair share.”

When it comes to workers like these who are fighting back against the abuse of bosses, it is clearly appropriate to declare, “This is what Occupy looks like!”

JESS GUH, a fourth-year medical school student at the University of Michigan, writes for TCBH! about race, privilege class and medical issues. Her work also appears sometimes on Slate magazine.