The week before last, our President made a pronouncement on Net Neutrality that pleasantly surprised activists and won him favorable coverage in the newspapers: both rare outcomes these days.

In both timing and content, the short speech (aptly broadcast over the Internet) was stunning. The President hit all the major points of contention and controversy in what has become a searing debate over the Internet’s future and his talking points mirrored all the arguments progressive Internet activists have been making. It was among Obama’s most forward-looking speeches. 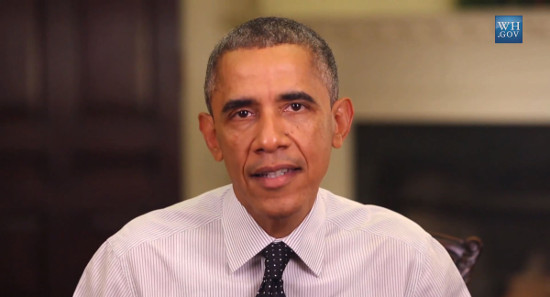 Not only did he land on the right side of issues like assuring full and equal access and speed for all users and content providers but he came out in favor of the demand that has now emerged as the focal point for the Net Neutrality campaign: applying Title II to all Internet providers. In layperson’s language, that means treating all Internet companies like FCC-governed utilities. That’s what they did with phone companies and that’s why phone service is, today, “service neutral” and the change would lay the groundwork for Net Neutrality’s protection.

While calling it a victory for the Net Neutrality movement, however, activists salted their celebrations with a bit of skepticism. This is the man, after all, who has turned the Internet into the largest surveillance network in history while forging one of the most aggressive interventionist and homicidal foreign policies in the country’s history. The speech was great but will it make a difference? And does the President really care? The President is, above all, a master politician and so the question arises: was this speech less policy than politics?

We’ve covered the Net Neutrality debate extensively but, to recap: Net Neutrality is the principle that service providers — like Verizon and Comcast — can’t discriminate in the delivery of content or provision of access based on user, content, site, platform, application, type of attached equipment, and modes of communication. If you go on-line, you can reach everything anyone else can and you should never have to pay more to reach certain content.

This past January, a federal court determined that high-speed providers like Comcast aren’t subject to the neutrality rules that govern telephone companies — the Title II provision — and so net neutrality doesn’t apply to them. They are, after all, cable companies and anyone who subscribes to cable television with its multiple “programming packages” that give you a monthly dose of sticker shock knows there’s nothing “neutral” about cable.

Since that court rebuke, the FCC floated a proposal calling for a two-tier Internet — a faster, paid Internet and a slower, free, one — insisting that the slower connection will be as fast as any around.

The FCC’s shell game didn’t fool anyone and the outcry was deafening. A national campaign of events, rallies and “workshops”, unrivalled in the history of communications regulation, ripped through cities nationwide uniting scores of organizations as politically diverse as Consumers Union and the Media Action Grassroots Network, MAGNet. Shortly before the proposal was to be voted on by the FCC, it was suddenly and surreptitiously dropped.

Then last month the Commission “leaked” another proposal forged in some backroom discussions at the its office. That proposal was so complicated and nuanced that it tooks days of analysis for activists to understand it and they didn’t even try to explain it to everyone else. But there was one provision everyone understood: under this new policy, providers could offer faster paid access, provided the FCC thought it was “commercially reasonable”. The noise made by the Net Neutrality movement became deafening.

It didn’t take long for the President to make his remarks. Obama said he wants to preserve Net Neutrality and would like to see cable-driven Internet governed by Title II. Movement leaders had to pinch themselves. That’s their main demand. Once all high-speed Internet is governed by Title II, the Internet becomes a utility and the FCC can impose the same neutrality on it that companies like Verizon must follow when providing your phone service. It’s the regulatory mother-lode.

But those asking the question “Why?” got an answer in a statement the President made to an African summit shortly before his stunning Internet message.

“I personally, the position of my administration, as well as a lot of the companies here, is that you don’t want to start getting a differentiation in how accessible the Internet is to different users. You want to leave it open so the next Google and the next Facebook can succeed.”

The cat, as it were, peaked out of the bag.

Timing is everything in politics and Obama made his statement right after the mid-term elections. As a master politician whose own electoral success is due, in significant part, to the use of the Internet and his ability to read local and state elections, he obviously didn’t want to make Net Neutrality a mid-term election issue. So he didn’t say anything about it until after those elections.

But now he and his party need to think about 2016 and meshing the forces that put and have kept them in the White House for two terms. Those forces include the powers of Silicon Valley (now more a state of mind and money than a real place) and two of them, Google and Facebook, are actually mentioned in that Africa speech.

Both companies have been ardent Obama supporters and both are very upset with his administration. Google has found itself inundated with federal subpeonas, orders and national security letters (nefarious demands for information whose very existence you can’t mention without risking imprisonment). While the company itself believes it’s entitled to control the world, its officials believe the Obama Administration has no right to control its data. Facebook, long an acknowledged collaborator of the NSA’s spying program, is also staggering under the subpeona and request weight. While these companies aren’t happy about the intrusive information requests, they are even less happy that through revelations like those of whiste-blower Edward Snowden so many people now know about them.

Lining up with these two giants in fierce support of Net Neutrality are MicroSoft and Ebay, both of which have suffered the inundation of surveillance demands and intrusive government data robbery that Google and Facebook have faced.

In short, these are the unhappy partners with millions of dollars to support their views and tens of thousands of employees to vote that way. Clearly, the President needs to smooth over this troubled relationship.

In that context, this speech may be more about throwing a bone to the puppies than revealing a bone of genuine political contention.

Still, there is contention; it’s inside the FCC.

Right now, the Commission is comprised of two Democratic nominees (Jessica Rosenworcel and Mignon Clyburn) and two GOP activists (Ajit Pai and Michael O’Rielly — who really spells his name that way). The Chair is Thomas Wheeler, a Democrat.

The two Republicans seem to want to dump Net Neutrality. They’ve both made speeches voicing support for “robust business opportunity” within the Internet — a catchphrase for letting companies do whatever they want. The two Democrats, though less public about their views, will undoubtedly follow the President’s lead. We can only imagine what kind of debates are going on in those offices.

The problem, however, is Chairman Wheeler. While he’s a Democrat through and through (having raised over a half million dollars for the President’s re-election campaign, for example), he is also a former lobbyist for, you guessed it, the Cable industry. Activists have viewed the Chairman with considerable confusion: his proposals say they “protect” Net Neutrality while effectively trashing it. But, given his background and the bizarre world of double-talking politics in Washington, Wheeler’s strange fence-sitting makes sense. He’s holding hands with both opposing camps.

The problem is that the President appears not to be happy with that. The last thing Barack Obama and the Democratic Party need is to provoke an escalation of the mobilizing being done by a movement that literally lives on the Internet, has resources for large campaigns and constituencies that cover the political map. The same forces and technology that helped put him in the White House could wreck his party’s hope of holding onto it.

In that sense, a President who favors expediency over principle and has done that consistently during two terms in office can see that expediency now cries out for a principled position. Viewed through that prism, his remarks may be a nudge to his FCC Chairman mixed with a bit of frustration that the guy can’t come out with a proposal that doesn’t start a political forest fire.

In any case, it’s important for all those supporting Net Neutrality to remember that, while he appoints the FCC, Obama doesn’t control it. It can do as it wants. So the pressure that has forced it to back off on previous destructive proposals and has drawn the President out of his shell to finally make a strong statement must continue and grow. It’s more important than ever to push for protection of Net Neutrality, remind the powers that are that the President has declared himself part of our movement and remind the President that it behooves him to stay in our ranks.

Disclaimer: My organization, May First/People Link, is a member of MAGNet and I serve in some of the Network’s leadership positions.