Three days after President Barack Obama visited Ground Zero in New York City on May 5th with his message of “justice being done” with the slaying of terrorist Osama bin Laden, disturbing news broke about this administration’s blocking of a quest for justice in the infamous May 1970 killing of four Kent State students.

Those four students fell in a barrage of gunfire on May 4, 1970 by Ohio National Guardsmen who opened fire during a peaceful protest against the Vietnam War on Kent State’s campus. That lethal fusillade of 67 shots during a 13-second period also wounded nine others, some seriously.

The inaction on this case comes as opposition grows to Obama’s escalation of the unpopular war in Afghanistan and its expansion into Pakistan.

One of those students injured during the Kent State shooting, Alan Canfora, met with U.S. Justice Department officials last Fall requesting a new federal investigation based on an analysis of an audio tape conducted early last year which revealed what two forensic audio experts say is a military-style order to open fire on student protesters. 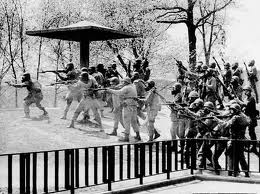 Evidence of an order to open fire contradicts Guard commanders who have consistently maintained that no such order was ever given to troops who were said to have spontaneously unleashed their gunfire in reaction to alleged sniper fire.

Analysis of the audio tape, which was recorded on May 4, 1970 also uncovered an altercation and four pistol shots prior to the Guard gunfire.

Those gunshots are believed to have been fired by a then Kent State student frequently referenced since that incident as an FBI informant, who was involved in the altercation. The alleged informant maintains he fired his pistol after being attacked by another student.

During that late 1960s and early 1970s, the FBI was involved in COINTELPRO, secret and blatantly illegal campaign to disrupt the anti-Vietnam War movement as well as the Civil Rights and Black Power movements, including through violence and assassinations. COINTELPRO actions involved not just the FBI, but also the CIA, Defense Intelligence Agency and other secretive government units, as well as Nixon’s own secret and illegal “Plumbers unit” run from inside the White House. Adding to suspicions that the shooting of the students at Kent State was a planned event was the fact that in ordering the Guard unit onto the campus, Republican Ohio Gov. James Rhodes told them to “eradicate the Communist element” there. A day before the shootings, President Nixon, who had just expanded the Vietnam War by invading neutral Cambodia, causing campuses across the country to erupt, had met with Gov. Rhodes, and many suspect that a bloody crackdown was planned at that time.

The Cleveland Plain Dealer newspaper, which commissioned the audio analysis by the two forensic experts, reported on May 8th that eight months after that Fall 2010 meeting between Canfora, his legal advisors and federal officials, “a seeming dearth of paperwork documenting” any Justice Department review of the new audio evidence “has raised some doubts about the Justice Department’s level of interest.”

That Plain Dealer account cites a Freedom of Information Act request by an author of a book on the 1970 Kent State massacre which confirms that “Justice Department officials have produced no reports, memos, legal analyses or other documents concerning the new audio tape evidence.”

One of the four slain student demonstrators at Kent State lies on the ground as students look on in shock.

The now-documented Justice Department inaction in this case has incensed many, including Ohio Congressman Dennis Kucinich who, according to the Plain Dealer, is pressing U.S. Attorney General Eric Holder.

Kucinich, in an April letter to Holder, stated that the Kent State audio findings, if verified, would contradict “the official record…and may shed light on whether any effort was made to prevent justice from being served.”

Obama Administration inaction on the Kent State audio evidence is another reminder of the pattern of persistent refusals by federal, state and local officials to forthrightly ferret out the truth to serve justice in ugly incidents involving alleged misconduct by law enforcement and/or military personnel.

That horrific May 13, 1985 incident occurred when Philadelphia Police, using a helicopter, dropped a powerful satchel bomb on the rooftop of a house occupied by members of a black radical organization known as MOVE. The bomb sparked a fire, which was the goal of the action, but Philadelphia’s then Police Commissioner ordered fire fighters not to battle the blaze, which roared out of control becoming a destructive inferno.

The Police Commissioner justified his unconscionable order, saying he was using the fire as a ‘tactical weapon’ to force the barricaded radicals out of their fortified row home. However, evidence indicates that police fired upon MOVE members trying to flee the blaze, driving them back inside their home, where temperatures reached 2,000-degrees.

The lone surviving MOVE adult and one MOVE child who successfully fled the fire, reported hearing gunshots, a contention indignantly rejected by police and prosecutors, including federal prosecutors, who refused requests to pursue civil rights law violation charges for the deaths of the five children trapped in the burning house.

The deaths of those five MOVE children in the inferno were characterized as unjustified homicides by a blue-ribbon, but non-bindin,g citizens’ investigative panel appointed by Philadelphia’s then mayor Wilson Goode.

But that homicide finding was rejected by Philadelphia’s then Republican District Attorney who deliberately distorted legalities to justify not pursuing any charges against any governmental employee involved in that 1985 clash, even against policemen (including the police commissioner) caught lying to a grand jury.

Philly prosecutors, for example, claimed reckless endangerment and risking a catastrophe charges were not applicable against the Police Commissioner because he possessed no ‘criminal intent’ when making the decision to fire-bomb the house. Bombing and burning, they claimed, are not in themselves reckless actions even if they did cause a fatal catastrophe.

Mimicking the non-prosecution posture of Philadelphia prosecutors, federal prosecutors incredibly found no fault with the FBI agent who improperly supplied the Philadelphia Police Department with military grade C-4 high-explosive, months before Philly cops used that explosive in the May 1985 incident, clearly suggesting that the plan was to incinerate MOVE from the outset.

That 1985 bombing marked the second deadly aerial assault on an African American community in U.S. history. On May 31, 1921 during a race riot in Tulsa, Ok white bigots dropped dynamite from an airplane on the all-black Greenwood section of North Tulsa.

The bloody two-day Tulsa riot, sparked in part by efforts among blacks to prevent a lynching, completely decimated the Greenwood section, including the prosperous financial district then referred to as “The Negro Wall Street” of America.

Typical of the racism pervasive in Tulsa at that time, a grand jury convened to investigate the riot blamed the incident on blacks. That grand jury claimed “no mob spirit” by whites existed during the riot, listing one indirect cause of the holocaust as agitation among local blacks for social equality.

In the 1970 Kent State incident, federal prosecutors charged eight low-ranking Guardsmen, but a federal judge later dismissed the case in 1974. As noted in the recent Plain Dealer article, “There has never been a completely satisfactory explanation for why the Guard fired.”