When Barack Obama, the first black president of America, delivered remarks Tuesday during a South African memorial service for that country’s first black president, he muffed a historic opportunity to right a grave wrong done by the American government – one that helped send Nelson Mandela to prison for nearly 30-years.

Obama, during his remarks at a Johannesburg, SA memorial service for Mandela, who died on December 5 at age 95, recalled how that world-revered leader had endured “brutal imprisonment.”

But the U.S. president conveniently excluded the fact that America’s CIA had helped South African agents capture Mandela, leading to the very imprisonment that Obama and other world leaders were decrying during that service.

A few miles from the soccer stadium where that memorial service for Mandela was held is the house in Soweto where Mandela lived before he went underground in the early 1960s to ramp up the fight in his homeland against apartheid – that racist system modeled on U.S. segregation laws.

That small four-room house on Vilakazi Street in Soweto’s Orlando West section is now a museum commemorating the life and sacrifices of the man credited universally hailed as the ‘Father’ of modern South Africa. 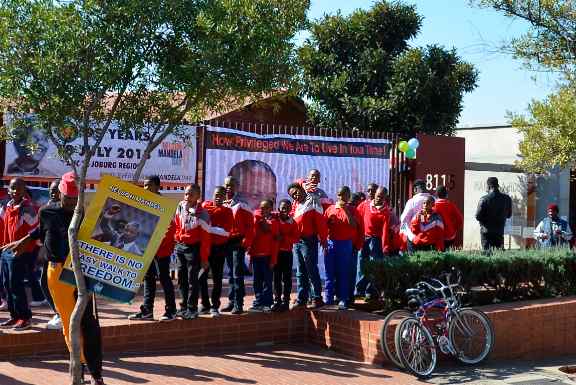 Included among the abundant memorabilia inside that museum is a June 1990 letter sent to then U.S. President George H.W. Bush Sr. by some state legislators in Michigan asking Bush to apologize to Mandela for the U.S. CIA’s role in helping South African government agents capture Mandela in August 1962, leading to his long imprisonment. Mandela was finally been released from prison in February of 1990.

Bush Sr., a former CIA Director, brushed aside that request. His cold-shouldered non-response to that request continued the stance among legions of American governmental and corporate leaders who aided-&- and abetted South African apartheid right up to the negotiated end of white supremacist rule and the 1994 election of Mandela. The U.S. government had backed South Africa’s white minority government economically, militarily and diplomatically for decades.

Obama, during his eloquent memorial remarks, could have apologized specifically for that CIA role in Mandela’s arrest or he could have at least acknowledged America’s decades-long stance on the wrong side of the anti-apartheid struggle. Instead, he took a pass, even at the point when he urged persons who attended that memorial to “act on behalf of justice.”

Obama’s immediate predecessors in the White House – George W. Bush and Bill Clinton – also were on hand for the Mandela memorial service. Neither of them had extended an apology to Mandela for the CIA’s role in his arrest, during their respective presidencies. Bush, in 2008, did sign a measure removing Mandela and ANC leaders from America’s ‘Terrorist Watch List’– a labeling left over from the era of federal government backing of apartheid.

Despite an Obama declaration during his remarks that lauded Mandela for embracing the “moral necessity of racial justice” the failures – real and perceived – of America’s current president to practice what he preaches about justice, is precisely what sparked protests against him when he visited South Africa last June.

On the occasion of that presidential visit, protesters blasted Obama for his arrogant and oppressive foreign policy according to press accounts. Protesters castigated his drone wars, his failure to close the Guantanamo Bay prison and America’s continuing support of Israel in that country’s apartheid-like subjugation of the Palestinians. Protesters included leading members of COSATU (the Coalition of South African Trade Unions) and South Africa’s Communist Party. Those two organizations, along with the African National Congress (ANC), form the tripartite coalition now governing South Africa. Mandela once headed the ANC.

Obama, during his Mandela service remarks, assailed the fact that “around the world men and woman are still imprisoned for their political beliefs.” Yet there too, was an element of hypocrisy, since as president, Obama has not pardoned any of the scores of Americans who’ve spent decades in prison for their political beliefs in fighting against American apartheid during the late 1960s and early 1970s – many of whom were falsely imprisoned under the illegal police-state-style COINTELPRO program once operated by the FBI.

President Obama has exercised his pardon powers less than any U.S. President in modern history. As Amy Goodman of Democracy Now! noted recently, Obama’s has to date pardoned ten turkeys during Thanksgiving but only 39 people during his presidential tenure. None of those pardoned have been America’s political prisoners.

Obama praised Mandela for teaching “us the power of action…” Apparently, though, Obama has not learned a key lesson of Mandela’s legacy: moving beyond symbolic rhetoric to real action.

Obama applauded Mandela as a “giant of history (who) moved a nation toward justice.” Mandela’s death, Obama said, occasioned a “time of self-reflection.”

Ironically, self-reflection would appear to be exactly what this US president needs if he is to improve his record of putting real substance into his too frequent symbolic efforts towards remediating festering wrongs committed by the American government.