The New York Times, which has been misreporting on, and misleading its readers about the downing of Malaysian Flight 17 since the plane was downed last July 17, continues its sorry track record of flogging anti-Russian sentiment in the US and of supporting the post-putsch Ukrainian government in Kiev.

This time America’s leading “newspaper of record” is distorting the preliminary report of the Dutch Safety Board which has been leading an investigation into the cause of the Flight 17 crash that killed all 283 passengers and 15 crew members of a Boeing 777 aircraft flying from Amsterdam to Malaysia.

In an article published Wednesday, headlined “Report Finds Missile Strike Likely in Crash of Flight 17” and datelined Brussles, Times reporters Andrew Higgens and Nicola Clark write in their lead paragraph that “investigators, in their first account of the calamity, released evidence on Tuesday consistent with an attack by a surface-to-air missile but shed no clear light on who was responsible.”

They go on to write, however, on the basis of no evidence at all, that the preliminary report “…gave some indirect support to assertions by the United States and Ukraine that pro-Russian rebels shot down the aircraft with an SA-11, or Buk, surface-to-air missile.”

Both paragraphs are completely at odds with the report, and that supposed “indirect support” is never mentioned. And no wonder: it doesn’t exist in the report. 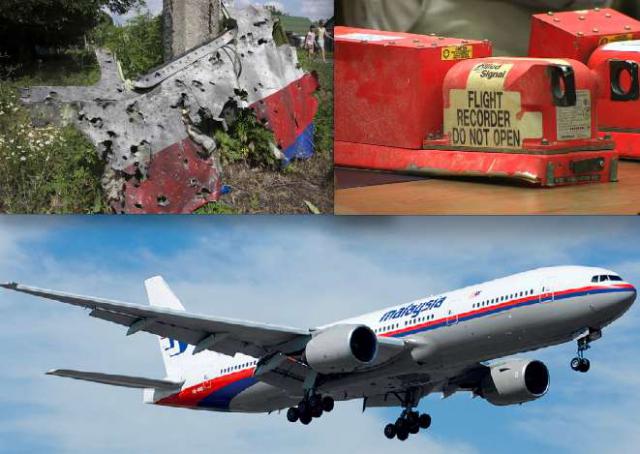 In fact, the 34-page preliminary report, made public in full, makes absolutely no mention at all of an SA-11 missile being the cause of the downing. In fact, it states quite clearly:

“Noting that the investigation team has not yet had the opportunity to recover (the components of the cockpit and front of the plane) for forensic examination, photographs from the wreckage indicated that material around the holes was deformed in a manner consistent with being punctured by high-energy objects. The characteristics of the material deformation appear to indicate that the objects originated from outside the fuselage.”

“The pattern of damage observed in the forward fuselage and cockpit section of the aircraft was consistent with the damage that would be expected from a large number of high-energy objects that penetrated the aircraft from outside.”

That’s it. There’s no mention of a specific missile, or even of a missile at all. This is important, because there are witnesses — eyewitnesses on the ground, and Russian radar records — that suggest that there were one or two Ukrainian fighter jets flying near the Malaysian jet just before it went down. And while the Obama White House, the Pentagon and the State Department (but, significantly, not analysts at the CIA) have been insisting that the plane was downed by a Russian high-altitude Buk anti-aircraft missile, and that it was operated by separatist rebel forces, there are also those who suggest that the plane was downed by Ukrainian jets firing 30-mm rapid-fire cannons and possibly also air-to-air missiles. Both options would result in “a large number of high-energy objects that penetrated the aircraft from outside,” but the Times only presents one option — an SA-11 — in what is presented as being an objective news report about the release of the Dutch preliminary investigation.

Nowhere does the actual report suggest responsibility for the downing of Flight 17. Nowhere does it offer speculation or analysis that would eliminate one option or another as to what brought down the plane, or of who was responsible.

Later in the article, the reporters note that Tjibbe Joustra, chairman of the Dutch Safety Board, “said in a telephone interview from the Hague that a final report would be issued sometime in the middle of next year and investigators hoped to clarify ‘the type of object that penetrated the plane.’”

But clearly, that would mean that as of now investigators have no idea what or whose it was.

The Times also equates the what it says is the implication that a Buk SA-11 missile was likely responsible for the downing with support for the US claim that the separatist rebels, and thus the Russians by extension, were responsible for this reprehensible event. But in reality, even if it were established that the plane was downed by an SA-11, that conclusion would do nothing to solve the question of who launched it.

The Buk, a complex radar-guided missile that requires a trained launch crew, was not something the rag-tag rebel forces in eastern Ukraine would have likely known how to use. Ukraine’s military, on the other hand, is known to have several dozen Buk launchers and at least four times that many of the missiles themselves, which are carried four to a mobile launcher. Ukrainian forces are also trained in launching the missiles, and in fact once used one to shoot down a Russian surveillance plane several years back.

It is of course possible that Russia could have supplied Ukraine’s rebels with a Buk launcher, though it is hard to see why they would have done that, since the planes attacking rebel positions — low-flying attack craft and helicopters, were easily targeted and had already been downed multiple times with much easier to launch shoulder-fired missiles. It’s also possible that rebels could have captured a Ukrainian Buk launcher, but again, they wouldn’t have really known how to use it.

There’s also the question of why on earth Russia, or the rebels, would have wanted to down a western civilian aircraft, thus bringing down the wrath of NATO and the western public on them.

None of this kind of thinking enters into the Times article. Nor does it mention the report’s statement that investigators are still seeking more information, including the recordings of air-traffic controllers’ conversations with both Flight 17 and military aircraft at the time of the shoot-down — recordings which were confiscated by Ukrainian officials and which have not been provided to the Dutch team.

The closest the Times comes to offering any caveat to its unjustified rush to judgement about this report is a quote from Jorts Melkert, a professor of aerospace engineering at the Technical University of Delft in the Netherlands, who said, “I can think of only two means of bringing a cloud of shrapnel up to an altitude of around 10 kilometers: either a surface-to-air missile or an air-to-air missile. Unfortunately the question is still open.”

The paper also quotes, at the tail end of the article, Reed Foster, a defense analyst at IHG Jane’s in London, who predicts that over time, “…there will be a winnowing down of the options. They (the investigators) will eventually cross the Rubicon and say that the overwhelming evidence is that this was a surface-to-air missile…but even then we won’t know definitively who pressed the button.”

Very true, and maybe someday, a report will come out saying what happened to Flight 17 and who did it. But these two Times reporters seem in their report to think they already know, and they and their editors want us readers to think we do also.