Republican presidential aspirants Jeb Bush, Marco Rubio and Rick Santorum all describe themselves as devout Catholics and, like most Republican candidates, they argue that religion should play an expanded role in American politics and government. However, on matters related to global warming, Messrs. Bush and Rubio both agree with Mr. Santorum, stating that we should, “…leave science to the scientists.”

Fortunately for these Republican candidates, Jorge Bergoglio, a chemist from Argentina, has stepped forward to address the concerns of those who think that global warming issues should be only confined to scientists. Recently, Bergoglio, analyzed the available data and produced a most remarkable treatise titled “Care for Our Common Home.” His book is well worth reading.

Bergoglio has an interesting past. In 1929 his family fled fascism in Mussolini’s Italy and migrated to Argentina, where he was born in 1936. He is well credentialed. He attended Wilfrid Barón de los Santos Ángeles, a school of the Salesians of Don Bosco, in Ramos Mejía, Buenos Aires, and entered the technical school Escuela Técnica Industrial #27. After graduation he began work as a chemist at Hickethier-Bachmann Laboratory in Buenos Aries (to finance his education, he also worked as a bouncer in an Argentine bar).

Thanks to a most magnificent, almost lyrical writing style Bergoglio’s book should be be easily understandable by the general public — and even by politicians. His words are firm. He resolutely reflects on the general state of our environment, and particularly on the contribution of modern society to environmental degradation. He writes:

Exposure to atmospheric pollutants produces a broad spectrum of health hazards, especially for the poor, and causes millions of premature deaths.” He continues, saying that society creates a  “… pollution that effects everyone, caused by transport, industrial fumes, substances which contribute to the acidification of soil and water, fertilizers, insecticides, fungicides, herbicides and agrotoxins in general.

Seeing little hope in industrial technology as a solution, he states:

Technology, which linked to business interests, is presented as the only way of solving these problems, in fact proves incapable of seeing the mysterious network of relations between things and so sometimes solves one problem only to create another. 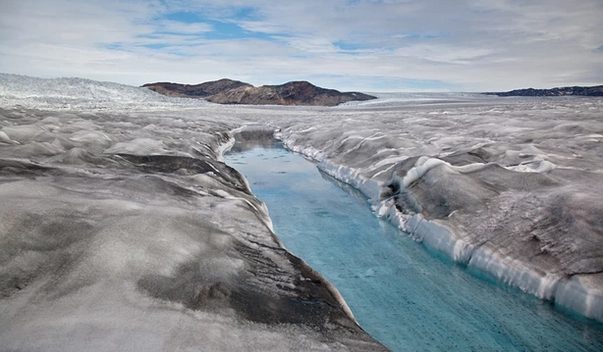 
Bergoglio offers pristine clarity on the question of human contributions to global warming. He clearly states:

Climate is a common good, belonging to all and meant for all. At the global level, it is a complex system linked to many of the essential conditions for human life. A very solid scientific consensus indicates that we are presently witnessing a disturbing warming of the climatic system. In recent decades this warming has been accompanied by a constant rise in the sea level and, it would appear, by an increase of extreme weather events, even if a scientifically determinable cause cannot he assigned to each particular phenomenon.

Most scientific writing refrains from arguing a moral imperative. Bergoglio does not. He clearly states:

Humanity is called to recognize the need for changes of lifestyle, production and consumption, in order to combat this warming or at least the human causes which produce or aggravate it.

He acknowledges that there are other natural forces that can cause global warming, but he clearly shows keen scientific insight in prioritizing where the responsibility lies. For example, he demonstrates a command of geophysics, chemistry and astrophysics, saying:

It is true that there are other factors (such as volcanic activity, variations in the earth’s orbit and axis, and the solar cycle), yet a number of scientific studies indicate that most global warming in recent decades is due to the great concentration of greenhouse gases (carbon dioxide, methane, nitrogen oxides and others) released mainly as a result of human activity.

Concentrated in the atmosphere, these gases do not allow the warmth of the sun’s rays reflected by the earth to be dispersed in space.” He does not hesitate to point the finger of blame stating, “The problem is aggravated by a model of development based on the intensive use of fossil fuels, which is at the heart of the worldwide energy system.

Bergoglio has been well known in his native Argentina for some time but recently become has familiar to a worldwide audience. Unlike most politicians, he does not possess great personal wealth and fortune; in fact he is pledged to live in poverty. He resides of late in a small guesthouse at the edge of Rome, just inside Vatican City. His entire activity is involved in volunteer work which causes him to travel frequently as he attends to the spiritual and scientific needs of the 1.2 billion humans on the surface of the planet who call themselves Catholics, to whom he is known these days as Pope Francis.

He made his first visit to the United States as Pope last week.

Robert M. Nelson is a NASA researcher working as senior scientist affiliated with the Planetary Science Institute. He recently retired from the position of senior research scientist at Caltech’s Jet Propulsion Laboratory. He contributed this article, which he first wrote for his local paper the Pasadena Weekly, to ThisCantBeHappening!