There was a truly bizarre and telling paragraph at the end of a Wall Street Journal news report today on Pakistan’s demand that the US bring home hundreds of CIA and Special Forces personnel operating undercover in that country, and that it halt the drone strikes in the border regions abutting Afghanistan, which have been killing countless civilian men, women and children.

Reporters Adam Entous and Matthew Rosenberg, with no sense of irony, wrote:

The US hasn’t committed to adjusting the drone program in response to Pakistan’s request. The CIA operates covertly, meaning the program doesn’t require Islamabad’s support, under US law. Some officials say the CIA operates with relative autonomy in the tribal areas. They played down the level of support they now receive from Pakistan.

Let’s parse this astonishing clip a bit. Earlier in the story, in fact in the lead, the article states that Pakistan has “privately demanded” that the CIA halt the drone strikes and pull out most of the CIA and Special Forces personnel operating in the country. But by the end of the article, we learn that the country is “requesting” a halt to attacks by the US on its own territory and people. But more odd is this notion that because the CIA is a covert agency, its operations don’t need Pakistan’s support under US law.

Excuse me for asking, but what exactly does US law have to do with whether or not the CIA needs another government’s support for it to operate in that country legally? 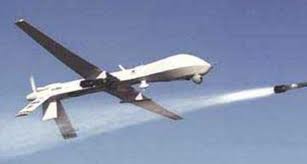 Let’s turn this Wall Street Journal paragraph around for a minute, in Chomskian fashion. Suppose we had a small army of Canadian intelligence operatives, heavily armed, in our country, conducting a secret war along our border with Mexico, and that they were also directing a campaign of drone attacks against Mexican drug traffickers in the “tribal regions” of Texas, New Mexico, Arizona and southern California–a campaign which was leading to the deaths of hundreds of American civilians. Let’s say further that the US government was demanding, or requesting, that Canada stop its drone attacks and bring home its agents and undercover Mounties.

Canada hasn’t committed to adjusting the drone program in response to the US request. The Canadian Security Intelligence Service (CSIS) operates covertly, meaning the program doesn’t require Washington’s support, under Canadian law. Some [Canadian] officials say the CSIS operates with relative autonomy in the US border areas. They played down the level of support they receive from Washington.

Any thoughts on how the Tea Party, the Republican Party, or you yourself would react upon reading such a report in Canada’s Toronto Star or or Globe & Mail?

Somehow we’re at a point where even journalists and editors in the US accept without question the notion that the US is somehow free to run military operations anywhere it wants, to kill civilians with impunity, and to ignore the demands not just of foreign governments but of the people of entire nations, at will, and that the issue is not whether CIA and Special Forces activity in a foreign country is legal in that country, but whether it is legal “under US law.”

This is the definition of imperialism.

It’s what I remember reading about how the Roman Legions behaved in the lands they occupied.

This whole sordid tale in Pakistan came to light because of the outrageous actions of one CIA operative, Raymond Davis, who was arrested and charged with two murders after he slaughtered two young men, apparently operatives of Pakistan’s Inter-Service Intelligence agency, on a busy Lahore boulevard. Davis, whom the US government desperately tried to pretend was merely an embassy employee who had been threatened with robbery when he pulled out one of his two automatic pistols and expertly blasted the two men through his car windshield (later exiting his car to execute one dying man and shoot the other in the back as he tried to flee), was eventually freed from prison and spirited out of Pakistan after the US paid a court-approved $2.3-million “death payment” to the families of his victims. (Ironies abound in this story. For all the US hyperventilating against Sharia law in Muslim countries, it was by applying Pakistan’s Sharia Law on the use of death payments to victims’ families that the US got Davis sprung.) But he was not freed before virtually everyone in Pakistan had begun calling for his trial and execution, and not before it became clear that he, and the rest of the US spy army in Pakistan, was actually involved in subverting civil authority in that country.

There will eventually come a day of reckoning for this kind of imperial over-reaching.

Already, the US is losing its war in Afghanistan, largely because its imperial legions treat the whole Afghan population either as the enemy, or as obstacles in the way of its killing machine. Already the US is finally being pushed out of Iraq (another war lost). And things aren’t looking that great even for America’s latest imperial adventure in the little country (pop.: 6 million!) of Libya.

In fact, as our vast and unprecedentedly expensive military bankrupts the nation, we may someday even find our own country being overrun by the armed agents of other lands, with their robotic aircraft bombing our helpless citizenry. When it does finally come to pass, we will have only our own imperial hubris to blame.