Is it news when police photograph and videotape demonstrations?

Apparently for American editors and reporters, making that news judgement depends on where the demonstration occurs and what nationality the police are.

When a hundred artists gathered outside a Beijing courtroom in mid-November to protest the jailing of artist Wu Yuren, who had earlier been beaten by police and jailed because he had gone to a police station to file a complaint against a landlord, the New York Times ran an article by reporter Andrew Jacobs which pointedly noted that police officers had videotaped the crowd, and then quoted a demonstrator, artist Dou Bu, as saying, “I was scared to come out here today, but you have to face your fears.”

But a week earlier, when several hundred backers of Mumia Abu-Jamal, a black journalist on Pennsylvania’s death row for the killing of a police officer, demonstrated in front of a Third Circuit federal court building in Philadelphia, where a three-judge panel was rehearing an argument on his sentence, and local police not only videotaped the officially sanctioned rally, but also aggressively photographed and taped a group of journalists waiting to be allowed into the courtroom early, there was no mention of their action in any media, local or national. 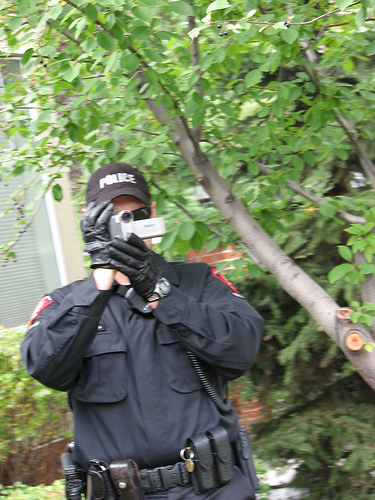 In Philadelphia, and in cities across the country, it has become routine for police departments to openly and surreptitiously videotape participants in demonstrations, and to assemble files on demonstrators, even when the events are entirely peaceful and without incident, and when the rallies or marches have been issued city permits.

Philadelphia Police officials insist that the photographing and videotaping of protests is legal and is not intended to intimidate dissent. Lt. Raymond Evers, who heads the Philadelphia Police public affairs unit, says the purpose of such photographic records is “crowd control and training.” He claims the department wants a record so that if any violence occurs, police can show what happened, and how police responded, and also so that any perpetrators or malefactors can be identified later.

That doesn’t explain what happened at the Abu-Jamal hearing, however. On Nov. 9, some 12 journalists who had come to the Federal Courthouse on 6th Street, just two blocks from the old Independence Hall where the Constitution and Declaration of Independence were signed, to cover an appellate court panel hearing reviewing a federal district judge’s 2001 ruling that lifted Abu-Jamal’s death sentence, found themselves surrounded by Philadelphia Police who began photographing and videotaping them at close range. The reporters, who had been credential-checked and then herded by US Marshals down a kind of “cattle chute” constructed of temporary metal barriers, to a holding point in front of the court building’s main entrance, were unable to avoid being repeatedly photographed.

Many, including journalists from abroad, expressed shock and dismay at the police actions. “Is this how they treat the press here in America?” asked one reporter from Agence France Presse.

Linn Washington, a local journalist with the Philadelphia Tribune, America’s oldest African-American newspaper (and a member of the ThisCantBeHappening! news collective), who was singled out for photographing and videotaping by police cameramen as he walked down the chute alone to join the other journalists, said, “It was absolutely a process designed to intimidate us.”

Journalists who asked the police pointing the cameras, and accompanying officers in civilian clothes from the department’s civil affairs office, for an explanation for their actions, and for information concerning what would be done with the resulting photographs and video records, were met with a stony silence.

It is likely that their images may end up an intelligence files held in Washington, DC.

A couple of years ago, at an anti-war rally in front of the municipal building across the street from Philadelphia’s City Hall, I spotted an unidentified and unmarked police videographer standing alongside legitimate TV cameramen recording speakers at the permitted event, and also panning the assembled crowd. Noting that he had no identifying TV station placard on his camera as the other cameras had, I asked him what station he was with. When he ignored me, I asked a couple more times, at which point he aggressively and silently turned his big videocamera directly on me. At that point, I identified him to rally attendees as a police officer. He and an associate I hadn’t noticed earlier immediately hurried off to a nearby Police Department van and left the scene.

When I later called the police department to ask about the taping, I was told that it was routine to tape demonstrations, and that because the Philadelphia Police are part of the federal Anti-Terrorism Joint Strike Force, copies of such tapes would be provided to the federal Department of Homeland Security.

In other words, in America, participating in a First Amendment-protected activity–protesting at a rally that has been granted a city permit–can get your image added to some terrorism file in Washington, DC.

Is that also what happens to the images of reporters who are simply performing their First Amendment role of reporting on a court hearing?

But is this news in the American corporate media?

If police tape demonstrators or journalists at a political event, it’s only news if it occurs somewhere like China.