Many millions around the world are convinced they know imprisoned journalist Mumia Abu-Jamal from closely examining the ‘whodunit’ contentions surrounding his contentious conviction for the December 9, 1981 slaying of a Philadelphia policeman.

However, few really know the ‘Who’ of Mumia –- the individual behind the international image of a victim of injustice; the grandfather with a layered life beyond the simplistic characterizations of both opponents who bash him as a murderous monster and of supporters who ascribe to him powers of mythical proportions.

The all too often missing ‘Who’ of Mumia Abu-Jamal is what is makes the focus of an engaging new documentary film, “Long Distance Revolutionary: A Journey with Mumia Abu-Jamal,” truly unique. The film opens in New York City on February 1 and Los Angeles on March 1.

“Long Distance Revolutionary” presents the personality and the person of Mumia before, during and after his arrest and conviction for the murder of Officer Daniel Faulkner unlike all the pervious movies on Abu-Jamal that principally probed contours and contradictions of his trial and conviction.

That missing ‘Who’ is what sparked the interest of Stephen Vittoria, a respected LA-based documentarian who wrote, directed and edited the this film. 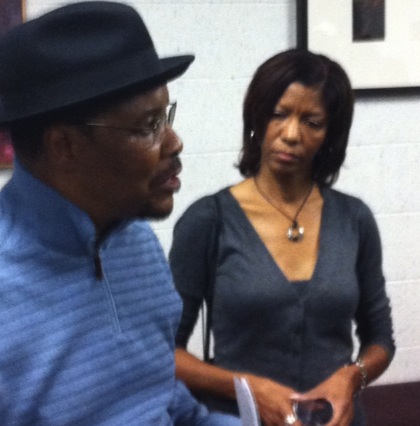 “The story I found most remarkable is the story of a man who has produced an incredible body of revolutionary journalism and history under harsh conditions, especially after incarceration,” Vittoria said about his movie.

Vittoria screened “Long Distance” at film festivals from California to Copenhagen and other selected screenings before the forthcoming in-theater release Cinema Village in New York City.

“Thirty plus years on Death Row, no computer or Internet access [yet] he’s published seven books, thousands of written and recorded commentaries…For a filmmaker, that offers deep and resonant opportunities,” Vittoria said. “Like the title suggests, he is a long-distance revolutionary, a man who never talks about his own case but instead takes on the responsibility of giving voice to the voiceless…a man who refuses to let the repressive apparatus of a racist state suffocate his soul.”

This film gives viewers a sense of the ‘Who’ of Abu-Jamal , the content and context of his life, including providing views points from acclaimed philosophers, historians, poets, writers, journalists and revolutionaries, as well as perspectives from members of his family.

Vittoria said the one interview in the film that “blows me away” is with Mumia’s older sister Lydia Barashango, who died months after having the on-camera interview with Vittoria.

“She gave us an insight into Mumia’s life at home as a kid, as an up-and-coming journalist in his twenties, his pain and suffering in prison, his separation from his family and children, and how much pain that causes him daily,” Vittoria said.

Full disclosure: I am one of the on-screen interviewees featured in “Long Distance Revolutionary.”

Fuller disclosure: I have been interviewed for every major movie on Mumia made in the 21st Century, including the film released in 2007 produced by Academy Award winner Colin Firth and the 2010 work released by Philadelphia filmmaker Tigre Hill.

Hill’s film simply regurgitated the prosecution’s case of absolute guilt without even referencing the grievous flaws in the prosecution/police case detailed in the Firth and other films.

Abu-Jamal and I worked together as news reporters in Philadelphia before his December 1981 arrest, he as a radio reporter while I worked for newspapers. I have followed his case closely since 1981, including traveling abroad to research and report on the ‘Mumia Movement’ which developed after his arrest and over the years of his incarceration and his legal battles with those trying to execute him.

In October 2012, for example, I traveled to Bobigny, France where officials of that Paris suburb named a street honoring Abu-Jamal. That was the second street-naming for Abu-Jamal in a suburb of Paris -– a city that extended Abu-Jamal the rare title of ‘Honorary Citizen.’

Given the total rejection American courts have given to Abu-Jamal’s appeals of his conviction (he did win an appeal overturning his death penalty conviction), it’s ironic that the Bobigny street bearing his name runs alongside a court building.

Lanquirary Painemal, an activist in Chile, was among the 100-plus attending the Bobigny ceremony, where a banner hung demanding the release of Abu-Jamal and Leonard Peltier, another American political prisoner.

Painemal said many in her country consider Abu-Jamal a freedom fighter because of his advocacy for the oppressed everywhere.

During that Bobigny ceremony, attended by one of Abu-Jamal’s sons, Mumia delivered a pre-recorded message of support in fluent French, a language he learned during his decades in a Death Row isolation cell.

Abu-Jamal once told me he transformed his Death Row isolation into a creative muse.

Vittoria said an amazing aspect for him personally which is displayed clearly in the film, is how Abu-Jamal appears not to be “bitter or broken or defeated” by his draconian incarceration.

The public in-theater release of “Long Distance Revolutionary” comes at a time of new revelations that further undermine Abu-Jamal’s conviction, of a reinvigoration of the Free Mumia Movement, of continued confirmation of the police corruption which stains the very core of Abu-Jamal’s conviction, and of still more of the vile venom that has long been aimed at persons who challenge the integrity and validity of his conviction.

In late December 2012, enemies of Abu-Jamal unleashed a barrage of terroristic threats against Heidi Boghosian, executive director of the National Lawyers Guild and against Professor Johanna Fernandez, a key Abu-Jamal activist, after that pair posted a picture on Facebook showing them standing arm in arm with Abu-Jamal during a prison visit with him shortly after he was finally transferred from his isolation on Pennsylvania’s death row to a regular prison that allowed visits where people could actually contact the incarcerated physically. (Death row inmates are only able to talk to visiters through a bullet-proof window.)

One poster named Ingram said he hoped “…YOU TWO BITCHES GET GANG RAPED AND MURDERED BY A BUNCH OF NIGGERS!!!” and another poster expressed his hope that “those broads suffer a flesh-eating bacteria starting in their cunts!”

Fernandez characterized those Facebook responses, some from active-duty Philadelphia police and firefighters, as “violent and, dare I say, fascistic…”

Fernandez made a 2010 film on the Abu-Jamal case entitled “Justice On Trial.”

In early fall 2012 a new book detailed first-ever accounts of the crass intimidation police, prosecutors and jurists directed at a witness in the Abu-Jamal case who had initially told police about seeing two men flee the scene of Faulkner’s fatal shooting — a claim that if true would totally undermine the prosecution’s case, which was premised on the assertion that Abu-Jamal was the only possible shooter on the scene.

When police arrested Abu-Jamal at the crime scene, they found him critically wounded by a bullet from Faulkner’s gun. Authorities contend no one fled the crime scene despite several accounts from other eyewitnesses to the contrary.

The intimidation of witness Veronica Jones included a bizarre courtroom incident during an appeal-phase proceeding in 1996 where Philadelphia prosecutors, with the consent of the presiding judge, orchestrated her arrest directly as she stepped off the witness stand after she had testified that police had forced her to lie during Abu-Jamal’s 1982 trial.

This book, “Veronica & the Case of Mumia Abu-Jamal as told to her sister, Valerie Jones,” also presents the first-ever revelation of the professional and personal relationship between Veronica Jones (working at the time as a prostitute in 1981) and the married Officer Faulkner — a relationship that she said included their having sex.

While neither Faulkner nor Jones, who died in 2009, are alive to address the sex allegation in the book, many written and verbal records list Jones as persistently maintaining that she knew Faulkner and that Faulkner had helped her.

When Jones recanted her 1982 trail testimony during a 1996 Post Conviction Relief Act hearing, she explained that she needed to clear her conscience more than specially aiding Abu-Jamal, because she knew Faulkner and would do nothing to harm him.

Valerie Jones attended an early December 2012 screening of “Long Distance” held at Temple University in Philadelphia along with an older brother of Abu-Jamal, Keith Cook.

Cook and Professor Fernandez, during a program at that Philadelphia screening, announced plans for a new campaign to secure Abu-Jamal’s release within four years.

For the past six months multiple scandals have rocked the Philadelphia Police Department including misconduct by narcotics officers resulting in prosecutors dropping over 100 cases, a police supervisor discharged for punching a woman, a policewoman discharged for stealing properties and a group of officers fraudulently obtaining federal low-income energy assistance grants including a lieutenant who make $95,000 annually.

Philadelphia’s police department has a sordid history of recurring brutality and corruption scandals dating back over a century. Local prosecutors have a record of generally ignoring those misconduct scandals.

Evidence unearthed by Abu-Jamal lawyers, and by a few investigative journalists like Dave Lindorff and researcher Dr. Michael Schiffmann of Germany, amply document how Philadelphia police manufactured evidence and false testimony to secure Abu-Jamal’s conviction in collusion with Philadelphia prosecutors.

Filmmaker Stephen Vittoria said Abu-Jamal’s persistent work exposing misconduct by police and prosecutors’ in Philadelphia and beyond, both before and after his incarceration, is a part of “…what makes Abu-Jamal’s life and work soar.”

For information on buying tickets to the movie, which opens tomorrow, Feb. 1, in New York, click here.