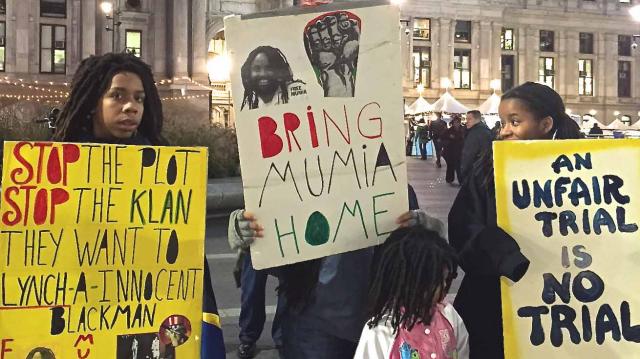 The first in a three-part series on Mumia Abu-Jamal’s fight to force the Pennsylvania prison system to treat his active Hep-C infection, and that of thousands of other infected state inmates, and on the raging Hepatitis C epidemic in the nation’s prisons. (Click here for Part II)

The big courthouse news in Pennsylvania this week does not involve yet another sordid revelation in the sleazy racist-pornographic email scandal now soiling top justice system officials in the Keystone State that include a state supreme court justice and ranking prosecutors.

This big news is rare courtroom testimony from Mumia Abu-Jamal, the renowned jailhouse journalist considered by many around the world as an authentic political prisoner in America.

On December 18th Abu-Jamal is scheduled to testify during a federal court hearing on his lawsuit attacking medical mistreatment from Pennsylvania prison authorities, and demanding –- negligent treatment that almost ended his life earlier this year. The lawsuit also seeks a court order mandating that he and other Pennsylvania inmates diagnosed with Hep C, a potentially deadly diseased, get treated with medications that, while costly, have a proven cure rate that is quite impressive

Abu-Jamal has rarely testified in court during the thirty-plus-years he’s waged legal battles in criminal and civil courtrooms at state and federal levels. Abu-Jamal spent nearly thirty-years on death row improperly due to calculated error by the judge at his 1982 trial for killing a Philadelphia policeman. Pennsylvania appellate courts cavalierly upheld that trial judge’s error but that error was eventually overturned in federal court leading to Abu-Jamal’s current life-without-parole sentence. Pennsylvania is the state with America’s second largest number of inmates with life-without-parole sentences

This federal court hearing arises from a lawsuit filed over failures of Pennsylvania prison personnel to properly treat medical problems that produced painful rashes and open sores all over Abu-Jamal’s body. Medication given to Abu-Jamal during the mistreatment of those rashes produced dangerous side effects including diabetes, a serious condition that went untreated by the prison medical personnel that also refused to inform Abu-Jamal about the diabetes. Earlier this year that untreated diabetes caused Abu-Jamal to blackout. Prison officials reluctantly rushed him to a hospital emergency room in diabetic shock close to death.

Pressure Abu-Jamal’s far-flung support network put on prison authorities eventually led to a diagnosis that one serious problem Abu-Jamal had was Hepatitis C. However, prison authorities are now refusing to provide a proven medication for treatment of that Hep C. This withhold treatment posture contrasts sharply with the Hep C medication given inmates in other states including New York located adjacent to Pennsylvania.

Investigations conducted as part of the lawsuit against Abu-Jamal’s medical mistreatment uncovered the chilling fact that an estimated 10,000 inmates in Pennsylvania’s state prison system have the infectious Hepatitis C disease.

Abu-Jamal, in a recent Open Letter to his supporters, stated the negligent treatment administered by medical personnel contracted by Pennsylvania prison authorities “wasn’t a solution” but a problem “that created more problems.” Abu-Jamal, when addressing one powerful steroids prescribed for the skin rashes, stated that drug acted like “rocket fuel, sending my blood sugar levels soaring…it literally turned me into a diabetic.”

Recently, 110 legislators in Europe, that include members of the European Parliament, sent a letter to Pennsylvania Governor Tom Wolf that requested his intervention to obtain adequate medical treatment for Abu-Jamal.

That letter to Wolf stated, “international law provides that every human being, even a prisoner, is entitled to health care,” noting that Hepatitis C “can be fatal if not treated quickly with the appropriate care.”
European Parliament member Patrick Le Hyaric, the editor of a large newspaper based in Paris, organized that letter to Gov. Wolf. Le Hyaric visited Abu-Jamal in November.

Although Abu-Jamal’s current court battle over medical mistreatment is separate from that ever expanding email scandal, the improper activities by prosecutors and judges at the core of that scandal evidences the callous and corrupted misconduct by legal authorities embedded in Abu-Jamal’s case from the date of his December 9, 1981 arrest for killing a Philadelphia policeman.

This contentious scandal currently revolving around racist and pornographic emails exchanged between Pennsylvania supreme court justices and prosecutors in Pennsylvania’s Attorney Generals Office has already forced the resignation of one justice and has tarred another justice who rejects calls for his resignation from Gov. Wolf and others.

Exchanging those emails that pointedly demean minorities and debase women blatantly violate provisions of ethics codes covering the conduct of judges and prosecutors in Pennsylvania. Blatant ethical violations by judges and prosecutors are a consistent feature in Abu-Jamal’s unsuccessful efforts to void his controversial murder conviction.

As the seminal 2000 report on Abu-Jamal’s plight issued by Amnesty International noted, “numerous aspects of this case clearly failed to meet minimum international standards safeguarding the fairness of legal proceedings.” That Amnesty report specifically criticized the Pennsylvania Supreme Court for having repeatedly ignored “its own previous precedents in denying” Abu-Jamal’s appeals.

“If police officers and judges are so sure of what he did, they would have granted a new trial instead of converting his death sentence to life in prison,” Le Hyaric said during an interview hours after his prison meeting with Abu-Jamal.
“People in France and all over Europe campaign for Mumia because they believe the trial he received was not fair.”