Second in a series: “Rediscovering America”

Leading black-skinned representatives of the “hegemon”, as Cynthia McKinney calls President Barak Obama and Philadelphia Mayor Michael Nutter, could hardly expect to win any votes from the standing-room-only crowd at her anti-war tour last night at Calvary Church in Philadelphia.

Speaking before nearly 300 people–two-thirds of them black, the remainder white and hispanic–in her T-shirt proclaiming that “war kills”, the former U.S. congresswoman said:

“We need someone in the White House who thinks like us and not just one who looks like us. We have to act like we’re free if we want to be free. We have to liberate ourselves from war-mongering political parties.”

Philadelphia was one of the last cities on McKinney’s International Action Center-sponsored “Report from Libya: Impact of U.S. war in Africa” tour, which hit 21-plus cities. The Philadelphia meeting was co-sponsored by several community groups and left-wing political parties, including the Green Par,ty which ran Mckinney as its candidate during the last presidential campaign.

In addition to McKinney, representatives of the community and Sara Flounders, co-director of the IAC, spoke. Pam Africa of the International Concerned Family and Friends of Mumia Abu Jamal said, “This meeting is about action to stop the wars over there and here at home. And Amy Goodman [Democracy Now anchor] needs to stop ignoring the word brought to us by Cynthia McKinney.” A brust of applause reenforced this viewpoint.

A representative of an anti-police brutality group encouraged people to vote for Diop Olugbala for mayor as the only anti-imperialist running against the pro-corporate Mayor Michael Nutter.

McKinney led a delegation to Libya last May-June in opposition to the US-NATO assault on that country, which began in March and destroyed much of Tripoli and other cities that were controlled by the government of Muamar Gadsafy. She witnessed some of the bombing and its destruction of life and of the country’s infrastructure.

“I speak with a heavy heart, knowing that places I visited no longer exist. Migrant workers camped out in tents close to ‘The Door to Africa’ as Gaddafi’s residence, Bab al-Azizia, is known. They are gone now, many split into pieces; only rubble remains,” said McKinney. 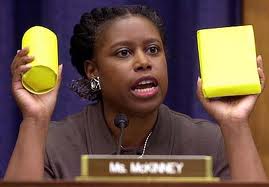 “They have pitted African against African, Libyan against Libyan. Between 50 and 58% of Libyans are dark to black-skinned. We heard of black-skinned Libyans being killed by white-skinned Libyan allies of NATO, and several blacks we met in our study expressed fear that this would happend to them.”
McKinney’s face tightened as she recalled how the bombing was so intense that dust, grit and ashes saturated the skies, causing darkness during the day.

IAC leader Flounders asserted that this blanket bombing of the country’s infrastructure is a “war crime according to several UN conventions.” She said, “In any war, it is illegal to drop bombs that cause civilians to die and the blackout of electricity, the destruction of water and communications, the bombing of civilians in homes and schools.”

People are going hungry because the economy is being destroyed, Flounders added. “Just like in Somalia where the US is sending ‘aid’ to the starving people in the shape of murderous drones. In Libya the big lie is that it is all over, just like when President Bush declared ‘mission acomplished‘ on May Day 2003.”

Bush had his hands full in Afghanistan and Iraq but his successor, a self-professed sort-of presidential peace candidate in 2008, has expanded Bush’s “war on terrorism” into six wars, with pseudonyms like: “missions”, “humanitarian missions”, or “counterinsurgency campaigns”. Besides Bush’s wars, there are bombings and drones, “special forces”, Navy Seals, CIA operators and highly paid private mercenaries killing people in Pakistan, Yemen, Somalia and Libya.

The two speakers outlined the reasons behind the US-NATO war “mission” in Libya not just as a bid for more oil, but for other economic and political reasons as well.

“I didn’t have a ‘position’ on Libya or Gaddafi until 2009,” McKinney responded to a question concerning human rights abuse by Gaddafi.

“In 2008, organizers of Gaza solidarity efforts asked me to join them on a ship that would bring greatly needed supplies to the entrapped people. Our boat was rammed by Israeli boats, and some people aboard told us to prepare to die. We didn’t die but we were prevented from accomplishing our humanitarian mission.

“In a second attempt Israel stopped our vessel and kidnapped us. I was held in prison for seven days. Nobody in the US congress or White House offered any aid, not even a peep of support or protest against Israel. But people from Libya did. They asked me to come there and learn about the ‘Green Book’–the underlying philosophy behind their peaceful green revolution.”

McKinney said she learned how after Gaddafi had led a movement to overthrow the repressive monarchy, he started to spread the wealth derived from oil income. Private banks were closed and a central bank created by the state so that it could finance useful projects without interest charges. One of those projects was the financing of Africa’s first communication satellite. Since its inauguration, in late 2007, the 45 African nations have saved an annual total of $500 million in interest which was previously pocketed by European communication companies. Telephones and other communications are much cheaper now across Africa.

Another useful project funded by the Libyan central bank, mentioned by McKinney, was the $33 billion Great Man-Made River of 4,000 kilometers which consists of three parallel pipelines supplying 70% of Libya’s six million people with clean water and irrigation water, gas and oil. But now that river is polluted with depleted uranium, courtesy of US arms.

The river had enabled the production of sufficient vegetables, fruits and grains for the entire population, and domestic farmers were further encouraged to produce by not having to pay taxes.

“Moreover, everyone has free access to education and health care. Students studying abroad have their expenses paid by the state, something the new regime–if successful–will certainly stop. That will affect Libyans studying in the United States,” McKinney said.

“There are no morgages, no landlords, no threat of eviction like here,” she added.

Gaddafi did make compromises with the West, allowing Western oil companies in, and selling 70% of its exported oil to Europe and 5% to the US. China has been buying 10%. But that 70% wasn’t enough to please the US and NATO countries, McKinney and Flounders maintained. China recently invested $18 billion in 50 important development projects and had 35,000 technicians starting working on them when the US and NATO decided to get rid of Gaddafi, who had further irritated these invadaing states because he did not sign on to their “war on terrorism”.

Perhaps Gaddafi’s greatest sin was that he endeavored to unite African countries to trade using a proposed gold and dinar-based currency. That proposal was seen as “a threat for the financial security of mankind,” claimed France’s President Nickolas Sarkozy. Much of France’s wealth–more than any other colonial-imperialist power–comes from Africa.

Having established that the Green Revolution was a progressive operation led by Gaddafi, McKinney added:

“I’m aware of these 43 years [of Gaddafi rule]…and I’m not in favor of any human rights abuse or denial of self-determination for any people. But when a country is invaded I back the invaded. In this country, there is a lot of demonization of Gaddafi and other leaders that the US corporations [and of course the U.S. government] do not like.”

Flounders added that she realized that Gaddafi has made “mistakes”, and that “he also didn’t show respect to the Pentagon lynch mob.”

“I’ll never be on the same side with the enemy of the peoples of the world. When the US drops bombs on people you have to stand up and say something, do something,” she said.

A burst of loud applause indicated public approval, as happened when Flounders asked for donations to pay off the travel bills incurred during McKinney’s trip to Tripoli and during this national educational-action tour.

Most people had already paid a requested but voluntary $10 entrance fee and now hands were raised to donate more. One couple came up with $250, several political and grass roots groups donated $100, $50 and $20. One individual had the courage to make a donation in the name of Amy Goodman, whom, she said, “has done many great programs and will hopefully come around on this one”.

There must have been at least $3000 raised to support the anti-war tour at this event.

Cynthia said farewell saying, “This tour is astounding. There has been standing room only in all the cities. I feel something in the air. We are many who are sick and tired of the lies of the government and the media; thirsty for real change.”

It was an unusually good experience for this rather pesstimistic activist-reporter. Soon I will return to where I currently reside, Denmark, one of the six nations that has been relentlessly bombing Libyans. Denmark, once a peaceful and tolerant country, is now a major ally of the Yankees. It hopes to become the 51st state, I believe, given that is works hand-in-hand with the US corporate government, killing people in four countries.

RON RIDENOUR, who was a co-founder and editor with Dave Lindorff in 1976 of the Los Angeles Vanguard, lives in Denmark. A veteran journalist who has reported in the US and from Venezuela, Cuba and Central America, he has written Cuba at the Crossroads, Backfire: The CIA’s Biggest Burn, and Yankee Sandinistas. For more information about Ron and his writing, go to:RonRidenour.com