I celebrate myself, / And what I assume you shall assume, / For every atom belonging to me as good belongs to you.

I pass death with the dying, and birth with the new-washed babe …. and am not contained between my hat and my boots.

– Walt Whitman, Song of Myself

Members of the Philadelphia chapter of Veterans For Peace have been marching in the annual Gay Pride Parade for a number of years. We did it again this year. The declared theme of this year’s parade was: “Love is Love,” a Whitmanesque sentiment I find hard to disagree with. It helps that I’m now more comfortable (less homophobic) with the more outrageous displays of male gayness, such as  the joyful fellow often seen wearing nothing but a glittering jock-strap and high-heels with three toy poodles dyed powder-puff pink, blue and yellow.

Back in the crazy 1960s when something strange and crazy came up, I used to say to my militarist old dad: “Whatever sets you free!” He actually got a big kick out of it and even said it himself now and then, lovingly, in an ironic fashion, quoting his leftist, middle-of-three sons. The Gay Pride Parade is, no question, a Whatever Sets You Free kind of thing. 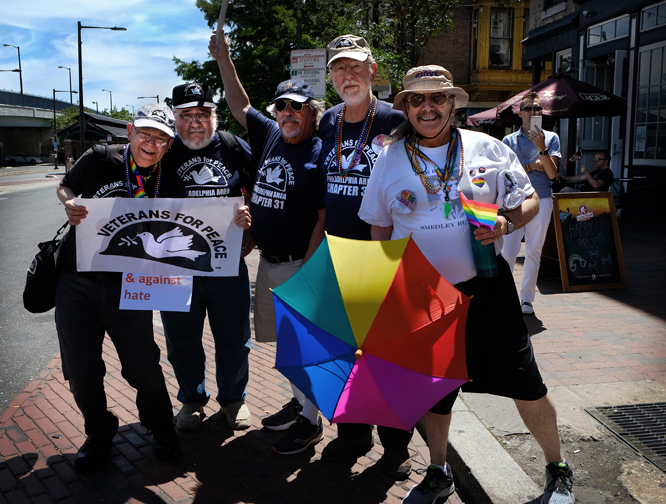 [Left to right, VFP31 members Mike Felker, Chuck Rossi, Arthur Sharon, John Grant and Bill Ehrhart in a “gay”, “Love is Love”, “Eros” mood. These guys don’t think killing is a good way to solve problems. Three of these guys served in Vietnam, one of whom is gay, while the other two got prostate cancer from the chemicals we sprayed all over that poor country.] 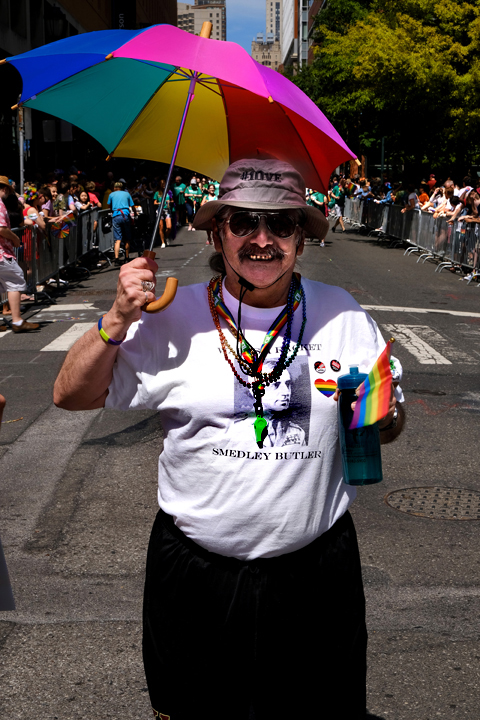 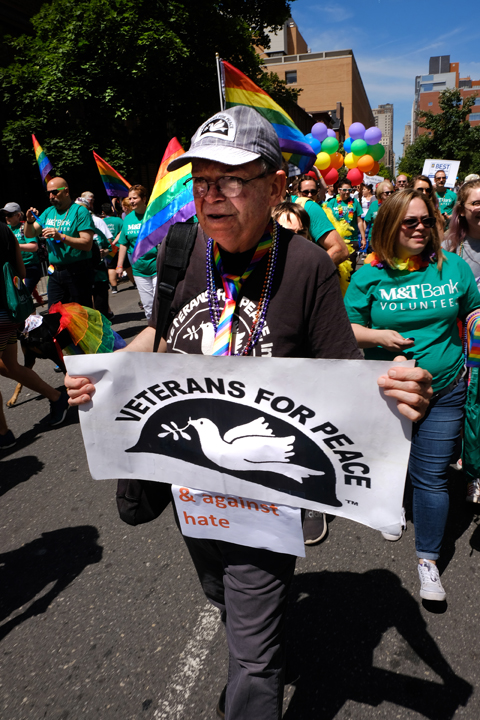 The reason our VFP chapter marches in the gay parade is due to one of our hardest-working members in the fight against violence and war. Mike is a married man with a husband; in Vietnam, he was a Navy corpsman in a combat platoon of Marine grunts. His job was to do his best in a rotten, confusing situation to keep the men in his platoon from bleeding to death before a medivac chopper could arrive and get them to a field hospital. The men he saved from death in a hostile forest 12,000 miles from home didn’t give a good goddamn if he was “queer.” His skills and his humanity were all that mattered. Very Whitmanesque.

I’m a dabbler in an obscure, half-baked idea from Sigmund Freud around the concepts of Eros and Thanatos. He wrote of these things in the period between the two world wars, when many of our greatest minds watched in exasperation as militarism, cruelty and hate gained legs in Europe. Freud exchanged letters on this matter with Albert Einstein. This was in the years after Yeats wrote the following lines in 1919:

Things fall apart; the centre cannot hold;
Mere anarchy is loosed upon the world,
The blood-dimmed tide is loosed, and everywhere
The ceremony of innocence is drowned;
The best lack all conviction, while the worst
Are full of passionate intensity.

Way before the internet and Facebook, Freud felt there was something nefarious going on in the connection between individuals’ myth-saturated minds and the greater zeitgeist of the age.  Eros was all the life-giving enterprises and positive things humans are about, while Thanatos was the obsessive, fear-driven focus on self-destruction, death, suicide and homicide. In his 2002 book War Is a Force That Gives Us Meaning, Chris Hedges re-warmed Freud’s stumbling 1930’s thoughts in the light of Hedges’ experiences in Thanatos-saturated places like El Salvador and Bosnia.

“Sigmund Freud divided the forces in human nature between the Eros instinct, the impulse within us that propels us to become close to others, to preserve and conserve, and the Thanatos, or death instinct, the impulse that works toward the annihilation of all living things, including ourselves. For Freud, these forces were in eternal conflict. All human history, he argued, is a tug-of-war between these two instincts.”

“War celebrates only power,” Hedges concludes. “[W]e come to believe in wartime that it is the only real form of power. It preys on our most primal and savage impulses. It allows us to do what peacetime society forbids or restrains us from doing. It allows us to kill.”

Now we’re free to ponder the notion of Eros and Thanatos in the age of Dick Cheney’s “dark side”, Putin’s new-gangsterism and the exploding world of Facebook and Twitter. 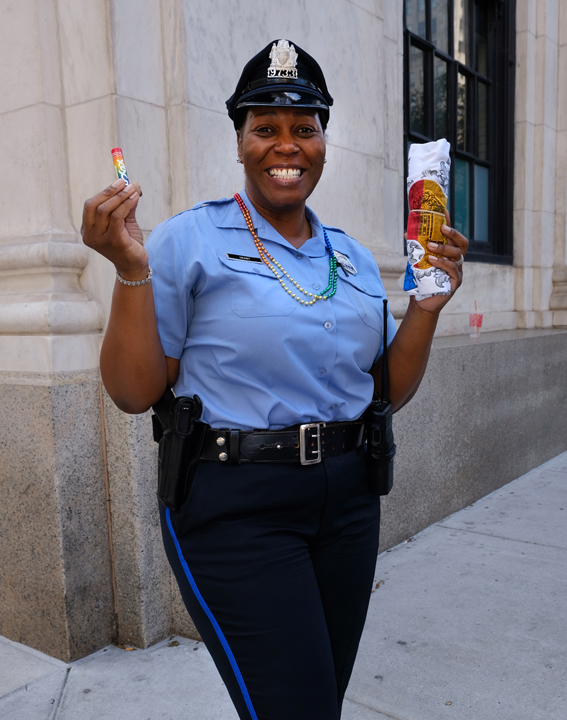 [Officer Serena Grant, my sister from another mother, was definitely in a Love is Love mood.]

This year’s theme of “Love Is Love” expressed all this nicely for me. I saw no examples of S&M cruelty on display. In fact, what I noticed was how many women were carrying signs and wearing t-shirts that declared “Free Mom Hugs”. In this year’s parade, I saw the constructive Eros principle being expressed unabashedly and without embarrassment.

At one point in the parade a woman with tattoos all over her came out of the crowd and said to me:

“Thanks for your service.”

She apparently liked that idea, because she opened her arms and we exchanged a warm hug in the street. I don’t know if she was “gay” or “straight” or what her life was like. She may have been a veteran. I don’t know. All I know is we had a bonding moment around a profound idea: War Sucks! And that it’s better to get along with other people in a constructive, cooperative manner than to work overtime to figure out how to dominate and exploit them (turn them into “losers”) — or how to create chaos in the world in order to shape and control the parameters of a new order that aligns with one’s personal interests.

I’m recovering from prostate surgery, which boils down to the fact those randy days when I enjoyed sexual athletics are relegated to nostalgia. Intimacy is what counts. Instead of being horny all the time, I’m glad to be alive. My cancer was “presumed” to have been caused by Agent Orange in Vietnam; it may have been that time I was driving a jeep on a road through a forest west of Pleiku and two C123s in tight formation flew over us low belching out white power, which settled down upon us. There was nowhere we could go. As I look back, I realize one doesn’t get much more into the realm of Thanatos than mass-spraying a peasant nation with plant-killing chemicals in order to denude entire forests so our forces could see the Vietnamese who were fighting for their liberty against our invasion. My job, of course, was as a radio-direction-finder to locate those Vietnamese freedom-fighters under the cover of a forest or dug into the ground. Agent Orange and me — both employed to help locate “Charlie” and kill him and her. The goal was to ferret-out the resourceful little bastards so we could destroy them by whatever Thanatotic instrument of death our culture could muster.

I just read and xeroxed Tim O’Brien’s story “The Man I Killed” for a writing class I’m teaching to incarcerated veterans in a Pennsylvania state prison. In the story, the character named Tim says nothing as he ponders the dead Vietnamese man he’s just blown to bits — while his squad-mates make jokes. “Oh, man, you fuckin’ trashed the fucker. … On the dead test, this particular individual gets A-plus.” The character Tim says nothing as he tries to imagine the life of this “slim young man” whose “upper lip and gum and teeth were gone. The man’s head was cocked at a wrong angle, as if loose at the neck, and the neck was wet with blood.” There was the “star-shaped hole” where one of the man’s eyes had been. Tim says nothing to his jokester comrades as he imagines the man’s life and thinks about who will miss him. One gets the sense the image of this young man’s corpse will be seared into the narrator’s mind ’til the day he becomes a corpse.

Just think: If the United States had been able to work out its post-WWII issues with Vietnam more in the constructive, diplomatic area of Eros and had been able to avoid what became an obsessive descent into the realm of Thanatos, the Vietnamese, we Americans and the whole world would now be better off.

This is what was going through my mind as I marched in the 2019 Philadelphia Gay Pride Parade as a Vietnam veteran. It’s what I was thinking when the five of us VFP veterans marched up in line, stopped and, in our FTA way, wheeled to the left to face the Gay Pride Parade judges for a most unmilitaristic salute.

Love is Love. Whatever sets you free. FTA*. 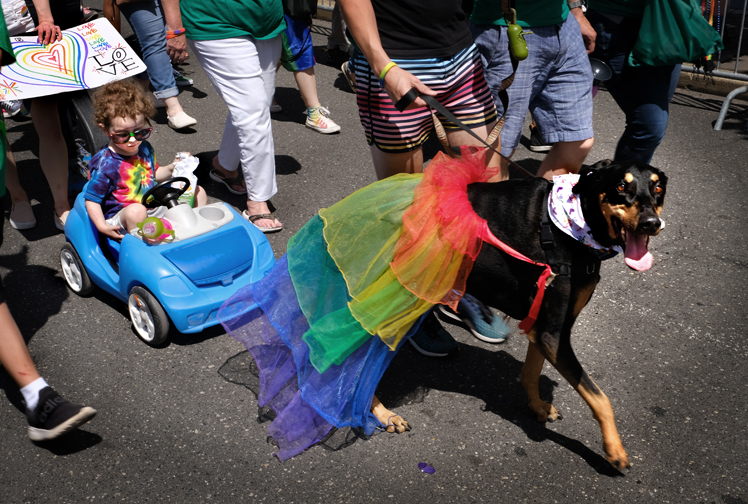 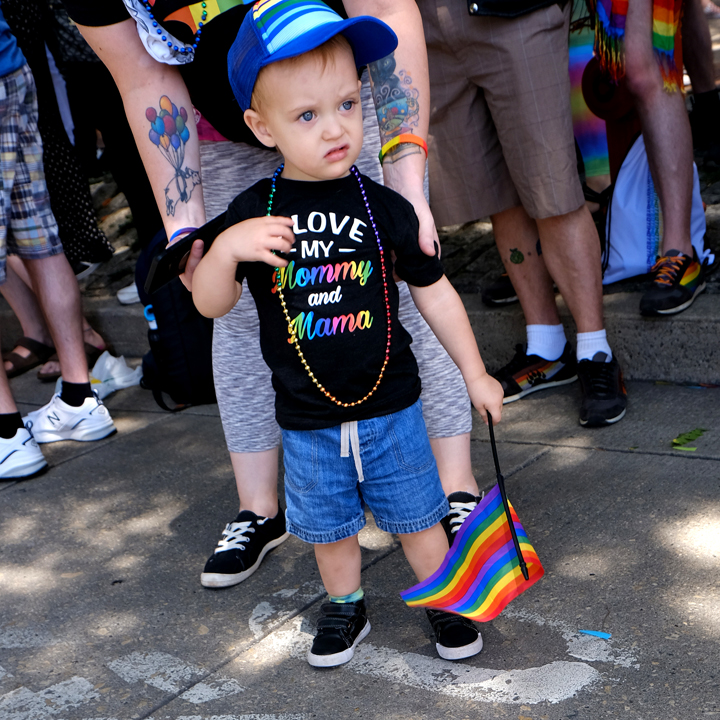 [And a few from past parades.] 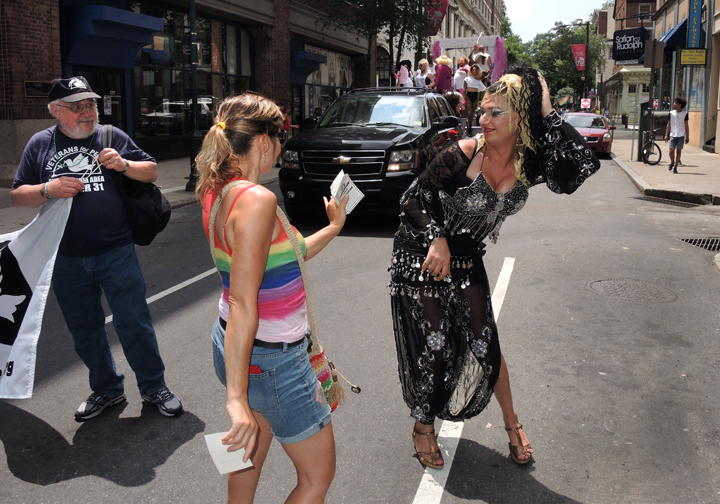 [Veteran Pauline Guerin passes out literature to a dancer on the street, while Chuck Rossi looks on.] 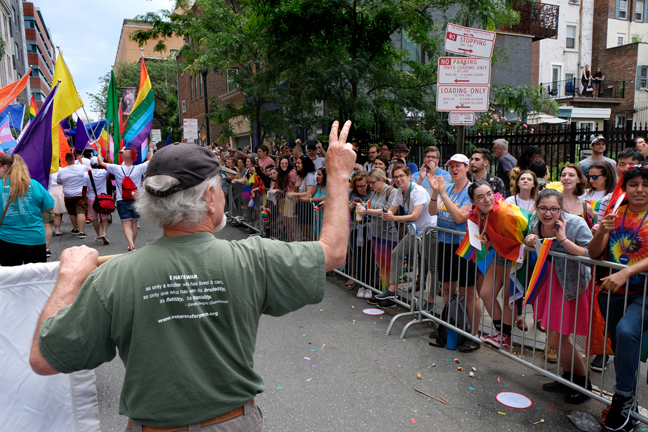 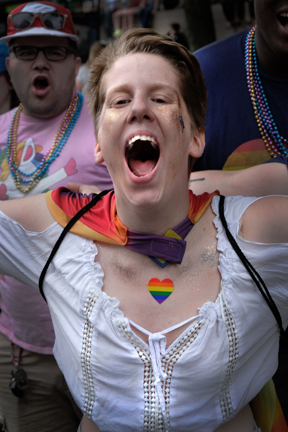 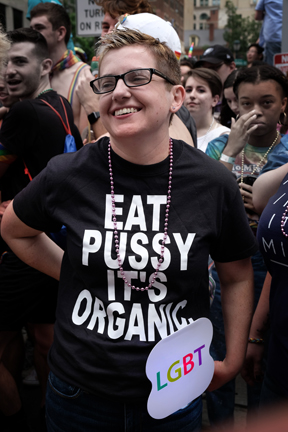 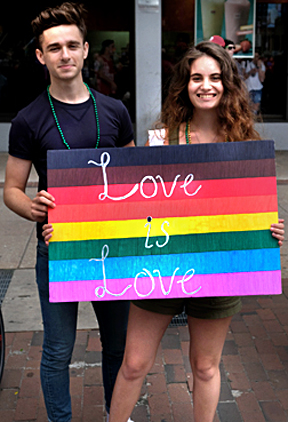 [All photos by John Grant, or as in the top shot, on Grant’s camera.]

* FTA:  Fuck The Army. The cry of many GIs following their tours in ‘Nam. At Fort Huachuca, we liked to intone it on our horns as we left work. In case you want to try it out, in Morse code, it’s: dit-dit-dah-dit, dah, di-dah.