The Texas State Board of Education is a lot like the weather. Everyone talks about it, nobody does anything about it.

Except Judy Jennings. She’s running for the Texas State Board of Education in District 10, which stretches in vast zigzags from the ‘burbs of Austin to the ‘burbs of Houston. In area, it is bigger than 12 states. It was gerrymandered by Tom Delay to include lots of Republicans. Jennings is a Democrat. She thinks that public education is a good idea, that actual science should be taught in science classes supported by tax dollars, and that the Texas State Board of Education should not be a laughingstock in large newspapers and small blogs around the world.

Jennings wants to succeed retiring board member Cynthia Dunbar, a Republican who voted with a majority bloc of social conservatives who banished Thomas Jefferson from history because he advocated separation of church and state, substituted Jefferson Davis as a deep thinker, and put creationism in the biology curriculum.

A part-time professor of law at Jerry Falwell’s Liberty University, she wants history books to call the slave trade the “Atlantic triangular trade.” In her book, One Nation Under God, Dunbar says that public education is a “subtly deceptive tool of perversion.” 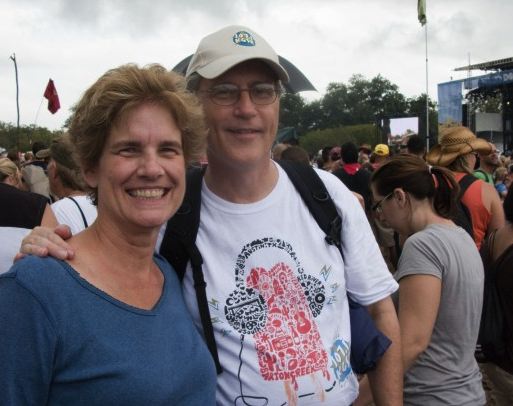 The Republicans have nominated Marsha Farney for the SBOE in the 10th District. Farney bills herself as a “common sense conservative,” apparently to distinguish herself from Dunbar and Dunbar’s chosen successor Brian Russell, who Farney beat in a primary. It is hard to tell what might constitute common sense for Farney. She doesn’t address any issues relevant to education with any specificity on her website. At a debate she said that she thought evolution should be taught “only as a theory.” That would move the SBOE, as it is called, about an inch closer to respectability. Compared with Dunbar, Farney is the lesser of two medievals. Or maybe she’s just better at looking slightly lesser.

In this time of uncontrollable outside events making both political parties look hapless, it will be interesting to see if the United States regresses further into far-right mythology or learns to face physical reality in the 21st century. In that sense the race to control the Texas State Board of Education, which oversees 4.5 million students and has huge influence on textbook content around the country, is more important than most Congressional races, even though the actual job offers no salary.

Conflict of interest: Judy Jennings is married to Hal Jennings, who works for IBM in Austin and has been my friend since 1963 when we were students at Van Hise Junior High in Madison, Wisconsin. Hal and I have been playing rock & roll together since the 9th grade Halloween party, reuniting the band periodically for special events, like the party we threw in 2006 when Judy completed her Ph.D thesis (A Comparison of Statistical Models Used to Rank Schools For Accountability Purposes) at the University of Texas. So I confess that I’m prejudiced. Judy, a Cheesehead by birth and Texan by choice since 1990, has been a big supporter of my band, the Schmoes, and I’m hoping we can reunite again and play her victory party this November.

Why are you running for office?

About seven years ago I worked at the Texas Education Agency, which supports the State Board of Education. And what I saw was the board members being disrespectful to the agency employees and the teachers who worked really hard to give the board members the information they needed to make good decisions. I realized that if I wanted to affect education policy, I would have to run for the board or the legislature. About a year and a half ago, I was on an airplane and I read an article in the Austin paper about some of the things that the board was doing, and I thought, “Now is the time. This is just not right.” So I decided to run for office, but I had no idea it would become a national and international spectacle.

I talked to someone yesterday who had just been to Egypt. They mentioned they were from Texas, and the first question they got was, “What about that school board?” In Egypt! It’s absurd. Texas is better than this.

Is your complaint more about history or science?

It’s everything. Teachers and subject area experts spend a lot of time putting together a curriculum that moves children logically from kindergarten through 12th grade in different disciplines. It goes to the state board for approval as curriculum, and then it goes into the textbooks and the state test is written. But what happens is, they make mistakes and they impose their personal ideology. One year it’s science, one year it’s social studies, one year it’s math…

How can you rewrite math according your ideology?

How do you campaign?

I just take any possible opportunity to talk with people. There are 1.5 million people I’m trying to reach, so I’ve put a lot of miles on my car. I went to a rattlesnake catching festival in Taylor the other day. I’m also raising money to do mass mailing.

The rattlesnake catchers approve of your message?

It turns out that people who live in downtown Austin and people who live in rural Texas have at least one thing in common. They want the best education for their children, and they don’t want that education based on anyone’s ideology. People all across the district are responding to that message. One of the things that has brought the United States so far is public education. It may be that the rest of the world makes things more cheaply, but we still invent things. We’re the creative ones. You need to educate every student for that. So when I see a state school board that is intent on preparing students for 1850 rather than 2010, it alarms me. And it alarms most Texans, especially business leaders and professors.

Are they embarrassed about the current board or resentful at the outside ridicule?

I think most of them are embarrassed. Texans are proud people, and they should be. There are so many amazing things going on in this state. I love living here. Yet this tiny minority of ideologues has become the symbol of Texas. They aren’t embarrassed by their social studies curriculum, but the rest of us are. I’m getting support from all over the spectrum, so it appears that most people want education overseen by educators.

Did you catch any rattlesnakes?

No, I didn’t. But I love going to small town festivals. I took Parker, my eldest grandson, and we got to see some rattlesnakes, and he got to ride a pony, and he ate some rattlesnake at a booth. How many four-year-old boys get to say they ate a rattlesnake? As for campaigning, I just put on my name tag, and if anyone is interested, I talk to them about education. That’s really fun, hearing from people.

Does Texas love standardized tests as much as New York does?

The No Child Left Behind Act was born and raised in Texas. The accountability system here came of age under George Bush when he was governor. Every teacher knows that we need tests to find out if the children are learning what they are supposed to be learning. And that should be the purpose of the test. When the results of one test given on one day a year are used to fire a teacher or close down a school, the pressure and intensity get out of hand. At the same time, it’s important to have accountability in schools. There used to be hundreds of thousands of students in Texas who weren’t being taught. The problem is that we’ve put so much focus on these standardized tests that teachers and students are incredibly stressed out. There are other systems for evaluating teachers, keeping the good ones and letting the bad ones go, but the board can’t discuss them because they’re too busy deciding whether Thomas Jefferson was an Enlightenment thinker, and whether we should even call that period of history the Enlightenment.

If you could wave a magic wand over the Texas school system, what would you wish for?

The other day, somebody asked me, “Wouldn’t you like to take Texas education off the front page of the New York Times?” And I said, “No, I want Texas to be there, but for the right reason—because we turned the system around and made it a model for the world.” That’s what I would wish for.

To contribute to Judy’s campaign, go to Vote Judy Jennings