Lindorff on Iran, Korea and the US:

On Iran: “The Iranians have enough money to buy a bomb if they wanted one, on the black market, so I think all of this has been hugely overblown in US propaganda, and Israeli propaganda.”

“If Iran got the bomb, I don’t think they’d use it. I think they’re not crazy. Israel has about 200 nuclear bombs and very high quality delivery systems and Iran would be toast if they used it and they know that. So what you’d actually have if Iran had the bomb would be a similar situation — only probably more stable — than the one you have in India and Pakistan, two countries that really hate each other having nuclear countries, with the difference being that those two countries have borders that are flash points. There are no borders that are flash points between Iran and Israel. So actually I think if Iran had the bomb it would make Israeli diplomacy more difficult, but it might in the end have a salutory effect on the two having to reach a kind of modus vivendi.”

On Korea: “You have the equivalent of a medieval absolute monarchy and so what’s going on in Korea is palace politics, and … I think the US would be wise to let what is happening in that close-to-failed state play out without irritating it to the point of a war.”

On the US: “I would argue that when it comes to adhering to international norms, that probably the biggest outlier state right now is the United States itself. The US has assumed for itself the authority to do whatever it wants regardless of international norms. And I would look at the invasion of Iraq, the threatened war against Iran–which does not pose an imminent threat to the US certainly, and probably to anybody–and the use of a place like Guantanamo that defies all international norms, and the use of drone attacks in any country we want to attack. These are all the actions of what would qualify as a rogue state.” 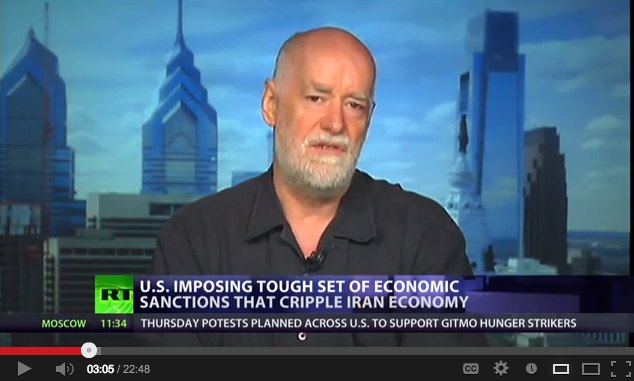 Lindorff on RT-TV's 'Cross-Talk' Program with the Hudson Institute’s Richard Weitz and Zachary Keck, editor of ‘Diplomat’ magazine (click on image to play program on YouTube)