If you want to know how moribund the Democratic Party is, how completely owned by Wall Street the president is, and how sick our national politics have become, just consider Social Security.

The president, earlier in his term, convened a “blue ribbon” panel, supposedly composed of a “broad spectrum” of opinions from liberal to conservative,” to come up with a plan to “reform” the system.

At issue: It is known that because of the huge number of Baby Boomers — people born between 1946 and 1964 — just starting to hit retirement age, and the general aging of the population, the Trust Fund composed of revenues paid into the system by working people will be depleted by about 2033. That would leave current worker taxes covering just 78% of the benefits promised to be paid out the same year, unless something is done sooner to increase revenues or decrease the rate of payouts of those benefits.

The commission, which proved to be a bust, was headed by co-chairs named by the president. For the Republicans, who since its inception have wanted to destroy this last vestige of the New Deal, it was former Wyoming Sen. Alan Simpson, a cadaverous wretch of a man who promptly called the program a “milk cow with 300 million tits.” ‘Nuff said there. Nice pick Barack.

As for his Democratic co-chair, the president named Erskine Bowles. If you wanted to know the views of this former congressman and Clinton advisor on Social Security, you need only learn that in 2011 at a public event, he praised Rep. Paul Ryan, now Mitt Romney’s choice for VP, who has said he wants to privatize Social Security, and condemned the president’s last budget proposal as a joke. Barack sure knows how to pick ‘em. Bowles was clearly a Democratic mole for cutting benefits, raising taxes and raising the retirement age on that commission.

But then, that was the point. In classic Obama fashion, before the debate even began on what to do to fix Social Security’s coming fund shortfall, due in a bit over two decades, he telegraphed to the commission that he wanted “all options” on the table. If that sounds like how he talks about Iran, it’s because he was telling everyone he was ready for the nuclear option — cutting benefits, and perhaps even partial privatization. 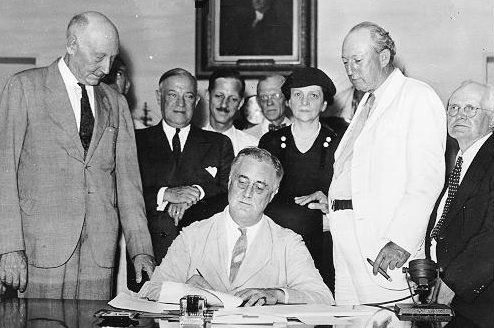 President Roosevelt signes the Social Security Act into law in 1935. Republicans are still trying to kill it.

The thing is, though, public support for defending Social Security is overwhelming. By vast majorities, Americans tell pollsters they want to solve Social Security’s future cash problem by immediately starting to tax all income earned by the wealthy, instead of just the first $110,100 of annual income.

If that one little change was made, the Social Security Administration calculates that 72% of the projected shortfall would be eliminated. Another way to put it is that the date that the Trust Fund would be depleted would be pushed back perhaps to 2050 or beyond, to a time when the Baby Boom wave would have mostly died off. Any remaining small deficit could be erased by establishing a small transaction tax — say 0.25% — on short-term stock trades, as is common in Europe and other countries.

So let’s get this straight: President Obama is in a very tight race with Mitt Romney, and faces the possibility of losing both the House (again) and the Senate to Republicans even if he manages to eke out a narrow win in November for a second term. Now that Romney has named Ryan as his chosen running mate — a man who is on record as wanting to privatize not only Social Security, but also Medicare, that equally popular remnant of Lyndon Johnson’s Great Society — Obama could win back the White House in a walk and take both houses of Congress with him by simply announcing that he was dead-set against cutting or privatizing Social Security, and that he wanted to solve the problem by subjecting all the income of the wealthy to the FICA tax, and by taxing day trading.

Pollsters and political handicappers are saying this race is close because while Obama is way ahead among people who say they are not likely to vote. Clearly his biggest problem then is that many people who voted for him in 2008 just don’t believe in him any more. He’s disappointed too many people. Here’s an issue that would fire most of them up. Throw in a Jubilee debt forgiveness program for student debt and underwater homeowners and it’s a landslide.

So why doesn’t he do it? Why does he, and why do Congressional Democrats, continue to talk about the need for “tough choices,” which is a code word for raising taxes on ordinary folks and cutting benefits to retirees?

The only conceivable explanation is that Wall Street really wants to privatize Social Security. It has been bankrolling Republican politicians for years who want to do that, and funding conservative “think tanks” that produce made-to-order “studies” supporting the idea. Wall Street also hates, with a passion, the idea of taxing high-speed computerized trading, which is how it now dominates, corrupts and literally poisons the market for ordinary investors. Of course debt forgiveness to Wall Street is like wolfbane to a werewolf or garlic to a vampire.

And Wall Street owns Obama, and the Democrats in Congress.

So the solution? What we need is a new third party: the Medicare and Social Security Action Party (MASS Action Party)

Here’s a single issue party idea that could really catch fire. There are 53 million people receiving Social Security right now, and another 75 million Boomers about to start receiving it. There are 48 million people receiving Medicare, and another 75 million who are about to start entering the program. Most of these people vote, and even many of the Republicans among them can be expected to vote to defend their benefits, which they paid for over their working lives. Younger people too will support such a party, because first of all, they all have parents and grandparents who depend on these programs, and I’ve never met anyone who thought his or her parents or grandparents got too much in Social Security benefits or Medicare assistance. Besides, young people want to know that they will have Social Security and Medicare someday too, They’ve seen how corrupt the stock market is, and don’t buy the snake oil being sold by the privatizers.

A MASS Action Party would inherently be anti-war, because it is clear that the easiest way to find the funds to improve programs like Social Security and Medicare, to make the former a real living retirement program, and the latter a health care program for all Americans, not just people who make it to 65, is to take it from the Pentagon, which currently eats up 53 cents of every tax dollar.

It’s probably too late, because of the roadblocks always put in the way of getting new parties on the ballot, to start a national MASS Action Party this year, but we could kick it off by starting a campaign to say nobody should support or vote for any candidate of either party who doesn’t publicly commit to no privatization or benefit cuts in Social Security, and to no FICA tax increases for those earning less than $110,100, and who doesn’t openly call for ending the cap on income subject to FICA taxes and for adding a tax on rapid stock trades. Likewise, support and votes should be withheld from any candidate who calls for privatizing or cutting Medicare benefits.

Next year, we can organize the actual party and take it for a road test in the 2014 Congressional elections, with candidates contesting every seat in the House, and all the Senate seats being contested.