A salute to the kids of the Marjory Stoneman Douglas High School in Parkland Florida!

After experiencing a terrifying attack on their school by a tragically unhinged former student armed with an assault-style rifle who killed 14 of their classmates and three teachers and seriously injured another 14, they didn’t retreat into fear and victimhood. Instead they are taking to the streets, taking to buses to the state capital in Tallahassee, and are using social media to organize a national youth campaign to get assault weapons and large-capacity magazines banned.

In refusing to be silenced by the National Rifle Assn. and political charlatans like Florida Sen. Marc Rubio or President Trump, or co-opted by Democratic politicians eager to use the issue of gun control to win points in next November’s congressional elections, these students and the tens of thousands of high school kids who have joined them across the country in states blue, red and purple, they have in one stroke revived the idea of mass political action. 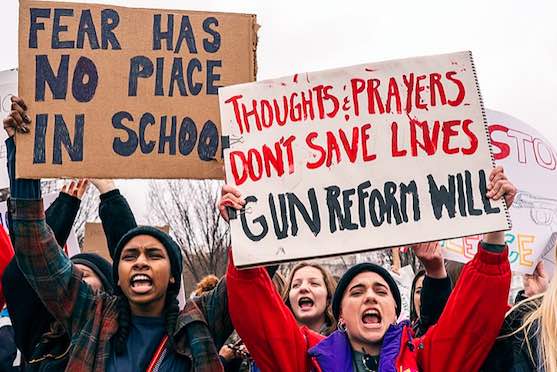 These kids are not being polite. When someone like Sen. Rubio or Florida Gov. Rick Scott or the Florida state legislature comes up with an excuse like blaming the shooting on mental illness rather than the easy availability of mass-killing military-style weapons, they shout “BS!” When they’re told the answer is to arm teachers, they shout “BS!” When they’re accused of being “paid crisis actors” or manipulated, they shout “BS!” And when the Florida legislature insults them by ignoring their mass trip to the state capital to demand a hearing on gun legislation, they mass in front of the statehouse, shout “BS!” and demand to be heard.

The whole political battleground over gun ownership in the US has just undergone a tectonic shift as great as if a 9-point tremor had struck. For the first time in memory, huge corporations like Delta Airlines are abandoning their backing for the NRA, dropping lucrative and once popular marketing discount programs for NRA members on pain of being boycotted — a threat that has even gigantic companies like Apple and Amazon worried. No wonder the NRA had their latest version of spokesman Charlton Heston, Dana Loesh, put out a short ad in which,looking like the Wicked Witch in the Wizard of Oz, she poses in black with a giant hourglass, darkly warning the “lying media,” Hollywood “phonies,” unpatriotic athletes, politicians who “watch America burn” and late night hosts,” that “Your time is running out — the clock starts now.”

The gun lobby making this threat is suddenly running scared. Like that other top lobbying organization, the pro-Israel lobby AIPAC, which was stood up and ignored by Democratic presidential candidate Bernie Sanders in 2016, their bluff has been called. Once cowed politicians are realizing they can stand up to such lobbies and still retain or maybe even gain support among voters, it’s their days that are numbered.

Will the student movement, on this once sacred issue of gun rights, succeed? I’m guessing it will. It already has on some level. Perhaps they’ll get AR-15 style weapons banned and also large magazines for semi-automatic weapons. Maybe they’ll only get the guns themselves banned for sale to people under 21. But they’ll get something.

And that raises the crucial question: is this the beginning of something bigger? Sure this issue of stopping the sale of instruments of slaughter has tremendous resonance following such a horrific shooting, and thanks to the spontaneous rising of a nation of angry students — teens in high schools and 20-somethings in college — but are these once polite and agreeable students going to take their new found in-your-face, “up-against-the-wall” political activism and apply it to other issues?

Again, I am optimistic.

Right now, the focus is on guns, and it needs to stay there as these fired-up kids take their righteous anger next to Washington, hopefully to be joined by masses of fellow students from across the country. That will be something to see. But what then?

Back in 1966 when I was a junior in high school, there was a senior named Jim Steinman who came to school wearing a beard he’d grown over the summer. This being only 1966, the school authorities were horrified at his breach of decorum and informed him that he had to shave in order to attend school. Steinman decided he wouldn’t bend and went out to the sidewalk in front of the school, which was in the center of the town of Storrs, home of the University of Connecticut. There he began marching back and forth with a sign on a pole saying “No beard, no school!” or something like that.

Before long, a number of us less hirsute students, myself included, began marching with him in solidarity, first at lunch periods, which at the time wasn’t allowed, and later actually skipping study hours or even classes. After a few days of this, there was a mass of students marching, often joined by supportive passing college students. The protest, still unusual at that time in middle-class suburbia, caught the attention of the NY Times (imagine that happening today for such a trivial issue!). The next day the paper had a story and photo.

The school administration soon caved, and since then beards have been permitted at the E.O. Smith High School.

It may seem like a petty thing, and I’m sure Jim had no idea his little private protest would have such an impact, but that protest and its success made, I believe, a huge impression on many of us at our school, and perhaps, thanks to the Times, even more far afield. We experienced the power of protest, resistance and especially collective action. It was a lesson I took to heart a year later as I approached 18 and had to register for the draft. Suddenly paying attention to the raging Vietnam War, I began researching about its horrors and realized that it was an atrocity my country was perpetrating, I resolved both to resist the draft, and to work actively in the movement to end that war. That’s another story, but suffice to say a year later I was on the mall of the Pentagon facing armed federal troops and ended up arrested and locked up with hundreds of other protesters in a federal prison for several days — the start of my radical education. And I trace it all back to Jim Steinman’s beard-ban protest.

In our day, as today, confrontational protests had already been underway for years by black activists demanding voting rights, an end to Jim Crow, and and end to segregated schools. It took the Vietnam War to wake the mostly white middle-class young people of the country to the need to take a stand. When we did wake up, though, and when we linked up with the civil rights movement and militant organiations like the Black Panthers, as well with returning veterans of the war, we all became in our millions a force for the government to reckon with.

I mention my own experience in high school because I’m sure that the students in Parkland, and students all over the country who are challenging school authorities by going on strike to support them, and who may be skipping school for days to travel to Washington or state capitals to demand action on sale of semi-automatic weapons, are also learning from their much more serious experience important lessons about the power of organized protest and collective action.

My hope is that they will not just learn those lessons but, being the idealistic young people that I know many of them to be, that they will apply them not just to this first awful but urgent struggle to make not just their schools but our whole country into a saner, safer place free of the almost routine slaughter of groups of people by semi-automatic gunfire, but also to other issues. Issues like our government’s unwillingness to confront raging climate change, combatting the institutionalized racism of our society, ending the militarization of our police and the mass incarceration of millions of poor and non-white men, women and even children, and resisting the mounting assault on women’s right to control their own bodies and health.

If they do this, I will have hope for this country and for the world. Already there are good signs. The mostly white suburban Parkland kids have now linked up with urban students in Chicago who have already been in the streets protesting gun violence, including gun violence by that city’s police.

The kids of America, now of all races and classes, are rising, as students did once before in the ‘60s, two generations ago, and if they keep rising — suburban white students linking arms with the young black, Latino, and other young people of color who are already in the streets protesting against police brutality, DACA deportions and the harassment of immigrants — nnothing will be able to stop them.

I hope our generation — parents and grandparents — will stand ready to back them too, as the Establishment inevitably tries to clamp down on them and to divide them.

If you are a veteran of the ’60s Antiwar Movement and want to announce your support for this growing student movement, go Here and sign on. And spread the word.