If you want to know where the real government of the United States is located, just check out one of the documents received by the Partnership for Civil Justice Fund in response to their Freedom of Information Act request to the Dept. of Homeland Security relating to surveillance of the Occupy Movement. That document, from the Secret Service, dated September 17, 2011, the day the Occupy movement began on Wall Street, from the US Secret Service Intelligence Division, titled Prism Demonstrations Abstract, lists the location as “Wall Street Bull” — a reference to the bronze statue of a bull on Wall Street in front of the New York Stock Exchange, and the “protectee” as “The United States Government.”
NYPD's Finest protecting the 'US Government bull' on Wall Street at DHS behest?

As the National Lawyers Guild comments dryly, “American taxpayers might find it odd to learn that the Secret Service was on duty to protect the Wall Street Bull in the name of protecting the U.S. Government. But there it is.”

The trove of 398 documents (many of them heavily censored) received on behalf of thePCJF, the NLG and filmmaker Michael Moore, consists primarily of materials from top Homeland Security Officials, which PCJF Executive Director Mara Verhayden Hilliard says is a deliberate effort by Homeland Security officials to deflect attention from the workings of the mid-level intelligence staff of the various agencies within DHS who do the spying, and the so-called Fusion Centers around the country — all wholly funded by DHS–which link federal agencies like the FBI with local and state police agencies.

“It’s all a game of hide-the-ball” says Verhayden Hilliard, who adds that the National Lawyers Guild is challenging the effort by insisting on getting the records from all levels, including the Fusion centers. 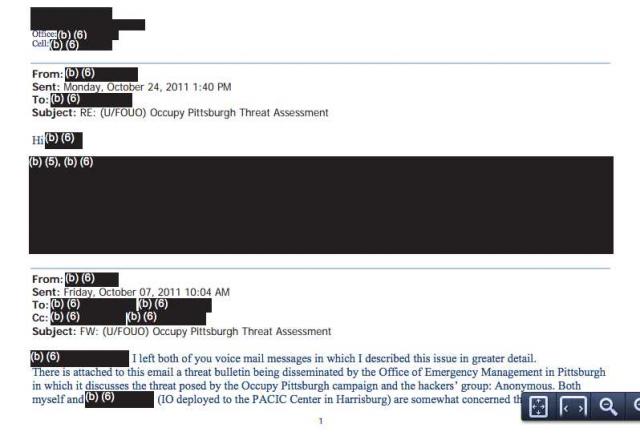 Even so, she says that the documents obtained so far show the extraordinary attention that federal intelligence and police agencies from the Secret Service to the FBI to the Federal Protective Service and others devoted to the Occupy movement from its inception.

“The documents we received were only from the highest officials in DHS,” she stresses, “which shows that the government was highly concerned about Occupy at the highest levels of government.”

The National Lawyers Guild explains that documents show that the DHS, in responding to its FOIA request, looked only at records of the Intelligence & Analysis division and the Federal Protective Service, where any intelligence documents relating to the Occupy Movement had already been “purged, restricted and/or rescinded,” and avoided, in responding to the documents request, looking for Occupy movement-related materials “where they are likely to be found, including in Fusion Centers and DHS sub-division such as the Operations Coordination & Planning sub-division which is responsible for DHS coordination with local and federal law enforcement partners.”

A good percentage of the documents recovered in the first trove (many of which are similar to documents released earlier to Truthout’s Jason Leopold who also filed an FOIA request with the agency) are instructions on how to respond to media inquiries about the federal response to the Occupy movement sweeping the nation. For example, on November 16, as the violent nationwide crackdown on occupiers by local police was in full swing, DHS Press Secretary Matthew Chandler sent an email to top-ranking DHS officials, including the chief of staff to DHS Secretary Janet Napolitano, and to the chief of staff of the DHS general counsel, saying, “We’re getting inquiries from CBS, AP, Daily Caller and others on an un-sourced Examiner.com piece that says that DHS and FBI are collaborating with cities by providing tactics and information on removing Occupy protestors. A check of I & A [Intelligence and Analysis] and FPS [Federal Protective Services] shows that this type of outreach is not occurring in any wholesale manner.”

Of course, as the National Lawyers Guild notes, that last line, saying that such cooperation and direction was not occurring in a “wholesale manner,” pretty much implies that it was going on — just not in a less-than “wholesale manner,” whatever that means.

Also suspicious is an email exchange dated September 29, 2011, in which DHS officials are discussing a National Cybersecurity and Communications Integration Center alert, based apparently on monitoring of email, twitter and Facebook communications among Occupy organizers, of the coming Occupy actions. The exchange is about how to respond to inevitable media inquiries about the DHS’s role in monitoring and obstructing the Occupy movement. The whole discussion is redacted from the documents, though one participant is shown writing “Here it is. That answer works.”

That the Fusion Centers were actively involved around the country in planning responses to the demonstrations is clear. An October 52011 document from the DHS Philadelphia Megacenter, titled “Demonstration-Peaceful/Planned” reports on an assembly being planned for “peacefully protesting union solidarity issues.”

The megacenters are regional repositories on intelligence relating, supposedly, to major potential threats to national security. “Why they were looking into the Occupy movement is a really good question,” says Verhayden Hilliard.

Most references to the Fusion Center-related communications were reportedly withheld from the FOIA response, leading the National Lawyers Guild to conclude that what they are seeing “appears to be the tip of the iceberg, carefully submerged by the DHS.”

Explains Verhayden Hilliard, “The push-down of information to the level of the Fusion Centers by the DHS places improper domestic surveillance in an area that they hope will be off-limits to public access, and it gives them plausible deniability in the DHS, so that when they’re asked if they have information, they just inquire of discrete sections of DHS, and they claim they don’t have any.”

One interesting series of documents shows that while DHS was distributing a prepared statement to journalists inquiring about any federal role in coordinating the local police crackdowns on Occupy protesters, which claims no such coordination was taking place, a second paragraph initially included in the planned response, was deleted after considerable discussion at high levels and was not sent out to reporters. The deleted paragraph reads, “We have held standard coordination calls and face-to-face meetings with our partners to ensure that the proper resources are available for operations such as street closures, etc.” No records concerning those “coordination calls” and “face-to-face meetings” have been provided.

Informed that he had only received incomplete and carefully limited information about DHS involvement in the crackdown on Occupy activists, CBS News reporter Bigad Shaban, said, “I’ll have to look at the FOIA documents, but that’s very interesting!”

There are a number of documents in the NLG’s collection that are emails within DHS concerning how to respond to reporters’ inquiries, for example from CBS and Salon magazine, concerning any DHS involvement in coordinating police crackdowns on Occupiers. These refer to “Tripwire” messages and other messages which are reported to be in the process of being “removed” from email records or “taken down,” with one DHS official, Dawn Scalici, on Oct. 28, 2011, writing, “Please check on the content of the referenced DHS product on Occupy Wall Street. This could be quite unfortunate. I thought IP had withdrawn this piece. We may need DSAC [Domestic Security Alliance Council, a strategic partnership between DHS, the FBI and the private sector] to immediately withdraw their email and take it off DSAC’s portal if it is posted there.”

The documents also, while repeatedly noting that “most” of the Occupy actions are “peaceful” and “first amendment protected,” go on to note that under the principle of “congruence,” the DHS could initiate surveillance if there were some report of a possible threat or illegal action. As Verhayden Hilliard observes, “The congruence concept, which they discuss in the documents, is the idea that if it would be improper to overtly collect intelligence or to surveil people engaged in free speech activities, as long as you can link it to some allegation of criminal activity, then you can do it. In short, it’s a pretext. So an informant, a provocateur or anyone, credible or not, supported or not, even anonymous, can give them “some reason” to suspect possible criminal activity. Then they can engage in intelligence gathering.”

A DHS “product,” for the uninitiated, is an intelligence report or threat assessment. This is a clear reference to DHS intelligence being provided to either local police and/or private security operatives, for example working for Wall Street firms. (Most Americans probably didn’t even know that something like DSAC even existed.)

Verhayden Hilliard says the NLG is expecting to receive more documents from DHS and other agencies in response to its continuing FOIA requests, and vows to drill down to lower levels of the DHS, and to look more broadly at Fusion Centers and other locations for documents relating to any coordination of the surveillance of and crackdowns on the Occupy activists.