The really damning evidence about the North Charleston police murder of a fleeing black man, Walter Scott, is not the image of him shooting Scott in the back, outrageous and murderous as that is (see screen grab image #1 from the phone video). It’s what happens in the video next, from about 1:02 minutes into the recording until 1.37 minutes. 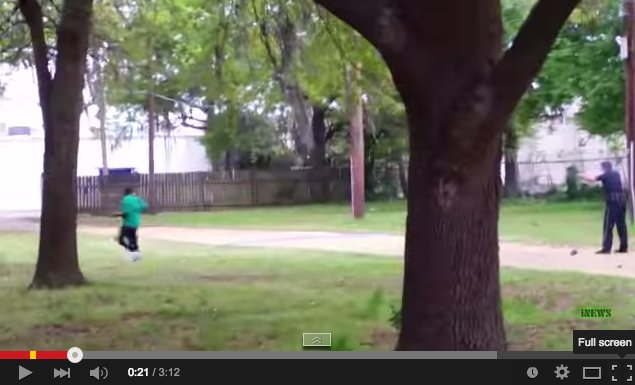 That’s when we see Officer Michael Thomas Slager, who had just handcuffed the clearly dead or dying Scott, suddenly stand up and start running (see screen grab image two) back to the place where he had fired the eight shots from. 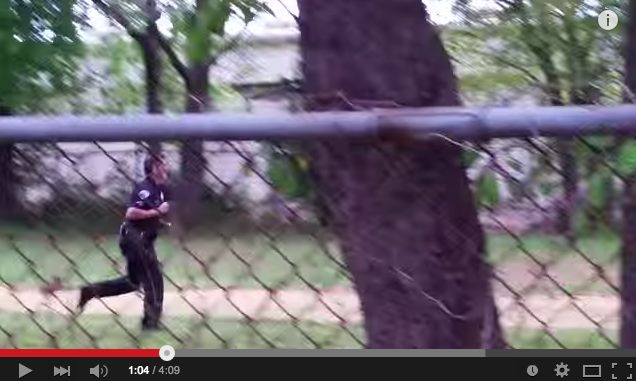 Officer Slater races back to where he had stood when shooting, to retrieve evidence to plant on Scott's body (screen grab #2)

Why, one might ask, would the officer, who had initially ambled leisurely over to his downed victim (see screen grab image #3), even taking time to scratch the back of his neck, suddenly race back to his initial shooting location? (Scott is already dead at this point, and Slager certainly didn’t rush to the aid of his victim, when he had an obligation to see if he could render first aid.)

Slater ambling slowly to Scott's body, scratching the back of his neck along the way (screen grab #3)

The answer comes as he bends over and picks up something from where he had been standing (see screen grab #4, showing an image or an object dropped by the officer as he’s firing, and screen grab #5 of him bending over to pick it up), and then ambles back to the body, where we see that another officer has by then arrived (see screen grab #6) and is inspecting it. 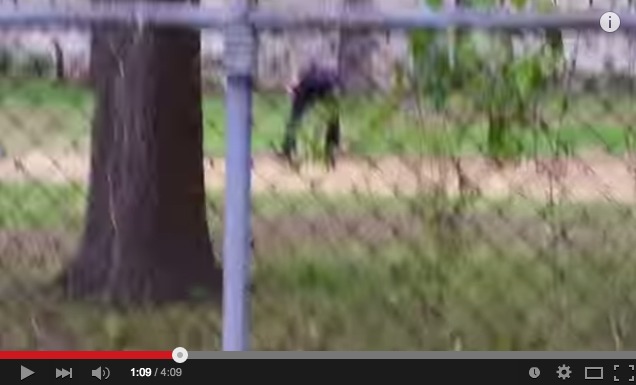 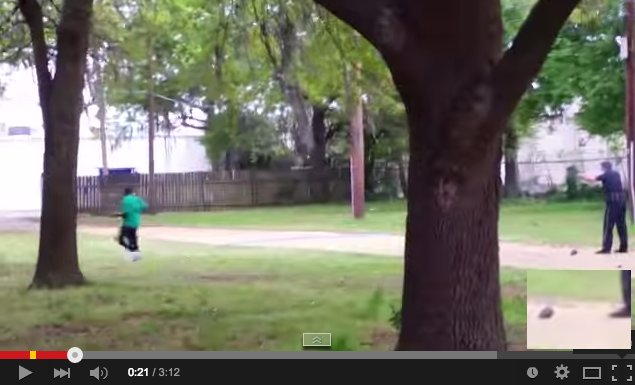 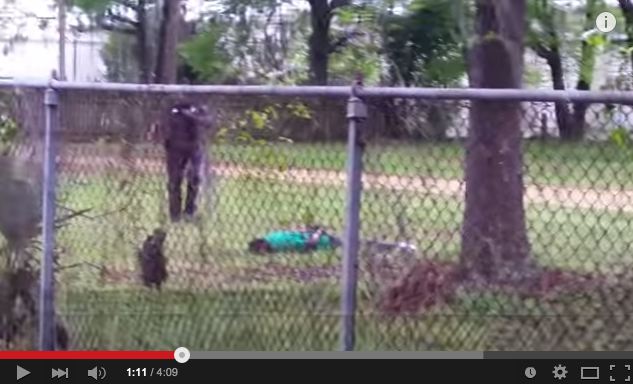 Top: Officer Slater, back at his shooting spot, bends over to pick up something (screen grab #4), and an earlier image Middle: showing a dropped object beside Slater’s foot (see inset) as he’s firing (screen grab #5). Finally, Bottom: the reason Slater went back — an arriving cop, seen inspecting the body as Slater retrieves his taser (image #6)

Officer Slager, on his way back to the body, paused, apparently as if to cough, at which point the dark object that he had picked up can be seen dangling from his right hand (see screen grab #7 (with inset). He then approaches Scott’s body, and then we see him toss that object — almost certainly the taser that he later tried to claim that Scott had grabbed from him as a justification for his shooting — down beside the body (see screen grab #8). 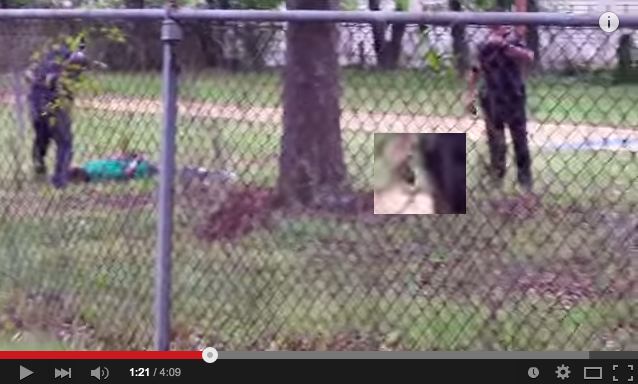 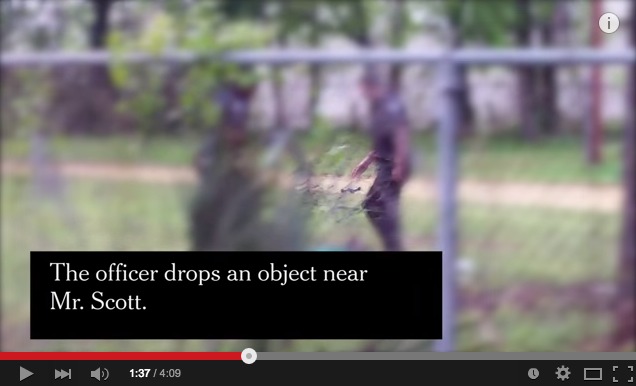 Officer Slater pauses before returning to the body, his right hand dangling a dark object, probably the taser (screen grab #6), and then on reaching Scott’s body, he drops and plants the evidence beside it (screen grab #8)

He clearly realized he needed to plant evidence, and with another officer coming onto the scene, he needed to run and get it quickly before more police arrived.

This evidence shows that not only did Officer Slager murder the fleeing, and completely harmless and unarmed Scott, firing eight times from his service revolver and hitting Scott in the back, reportedly five times, but he realized he was in trouble, and, with police arriving, raced back to grab the taser to plant by the body as a false justification for his act.

In fact, Slager reported to his superiors initially, before it was known that a witness, Feidin Santana, had courageously videotaped the whole incident, that Scott had wrestled the taser from him and was threatening him with it, and the department had accepted this false story. Only when Santana came forward with his video, despite fears of police harassment or worse) did the North Charleston police chief backpedal and have Slager indicted for murder.

This incident, perhaps better than any of the recent murders by police of young blacks around the country, illustrates how the nation’s police have become an occupying army answering only to themselves. If there had been no video in this instance, as is the case with most of the over 1000 shootings of unarmed persons in the US every year by police officers, we wouldn’t even probably be talking about this incident today. It would be just another case of an officer taking down a violent man who had threatened him.

Clearly, more cameras are needed, including body cams on officers. But something more is needed:

* First of all, the default presumption on the part of police leaders, prosecutors, the media and the public that police in shooting incidents always tell the truth has to be tossed out in favor healthy skepticism, followed by a fair and neutral investigation into each case.

* Second, the mob-like policy of omerta, which requires that police officers don’t “rat” on each other even when one of their number commits a crime must be ended, by a stiffly enforced policy requiring all crimes to be reported on pain of being fired from the force. Even adding minority officers doesn’t help much in overcoming this “blue wall of silence” about police criminality, as the current case shows. (The second officer on the scene, seemingly black, clearly saw Slager drop the taser by the body but said nothing, at least until the video came out. Now maybe he “remembers” it.)

* Third, the practice of police threatening and arresting citizens who film them during arrests must be ended (the courts have already ruled that it is legal to film police during arrests, but cops continue to grab cameras and phones and to arrest those who use them, with impunity).

* Fourth, every police department must have a citizen review board to examine all officer-involved shootings.

* Finally, police must be reconstituted as peace officers, not occupying soldiers. For most beats and patrols, there is no need for cops to carry weapons beyond perhaps a baton. Where crime rates and prevalent weapons might require arms, standard issue weapons must be reduced in their lethality, perhaps with rubber bullets instead of the killer hollow-points most departments now use. In dangerous cases, officers can call for backup with more powerful arms. In situations where an officer feels concerned, back-up should be called early, and then the least violent approach to making an arrest should be used, including negotiations from a distance, instead of immediate aggression, such as forcible entry and a quick escalation to resort to weapons. This is particularly true in the case where young people or the mentally ill or retarded are involved.

The growing incidence of police murder must be ended immediately!