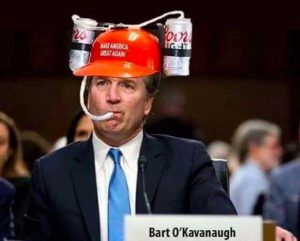 It looks like Brett “I like beer” Kavanaugh will soon be the ninth member of the Supreme Court.

The FBI has turned in a submissive fig leaf of a report on its cursory, rushed and presidentially circumscribed “investigation” into the claims of sexual abuse leveled against him by several women who assert that he attacked them when they were in high school or college, and now the three Republican senators who pretended to be concerned about his behavior and his veracity in denying the charges leveled against him appear ready to pretend they’ve been convinced by the FBI’s pretend investigation clearing him.

It was pretty much foreordained that gang-bang Kavanaugh would be confirmed by a Republican Party that, at least in the narrowly divided Senate, works in lockstep. Getting a fifth right-winger on the High Court bench was far too important a goal for Republicans for them to miss this chance, particularly with Democrats looking increasingly as if they may take control for at least the next two years of both houses of Congress this Nov 6 (or actually on  Jan. 3, 2020, when the new Congress is convened and lame duck members who were not re-elected have their current terms end).

That last point — the lame duck session in which current members of Congress remain legislatively capable but essentially unmoored from constituent pressure for almost two months — is an important thing to remember in all of this heavy breathing over the ‘dick-wagging’ Kavanaugh nomination: If ‘dry drunk’ Kavanaugh were to lose a vote by the full Senate, Trump would almost certainly respond by quickly nominating an even more right-wing replacement, Amy Coney Barrett, a judge on the 7th Circuit Court of Appeals. Barrett is a conservative Catholic cultist and not someone with any qualms about tossing out Roe v. Wade. She also supports the death penalty, virtually unchecked presidential power, tough immigration enforcement, etc. And because she is a woman, who would bring the male/female mix on the High Court to as close to parity as you can get with an odd number of jurists on the bench, it would be hard to bring a charge of sexism against her and make it stick. She’s also 47 and, being a woman, has a longer statistical life expectancy than the hard-drinking, anger-challenged, 53-year-old male Kavanaugh.

Looking at it that way, liberals and feminists should probably look at ‘FFFFF’ Kavanaugh as the better option than Barrett.

At least three-way Kavanaugh, after his pathetic performance in his return testimony before the Senate Judiciary Committee, is severely damaged goods. He is open to being impeached if Democrats can ever get their act together and win a significant majority in the Senate, not so much because he was a gross, brutal, sexist pig as a teenager and young man, but because he showed himself to be a total political hack, Trump clone, and worst of all, a serial felony liar under oath.

Even his likely soon-to-be colleagues on the right side of the bench like Chief Justice John Roberts and Sam Alito, both by most accounts, serious-minded conservatives who care about the reputation of the Supreme Court, are not likely to be pleased to see such an openly politically driven hack on the bench with them as it undermines the authority of their rulings and helps to ensure that when the political winds change, those rulings will be reversed.

In that sense, he is more akin to Justice Clarence Thomas, another joke on the bench, known primarily not for his judicial scholarship but as the shadow of the late Justice Antonin Scalia, silently waiting for his cue in Scalia’s vote on an issue before “seconding” him with his own vote.

The truth-challenged Kavanaugh  on the bench will be mocked publicly, watched like a hawk for signs of continued sexual harassment and abuse, and forced to recuse himself from many cases in which Democrats or women are involved, especially the Democratic Party that he so angrily denounced during his confirmation hearing, and women involved in harassment, sex-bias or abuse cases.

I  for one would much rather have a justice on the Supreme Court who invites richly deserved ridicule than one who undermines liberty, equal rights and justice while earning public praise as a legal scholar and as an honorable human being.

Any way you look at it, we’re going to be in for a period of reactionary rulings by the Supreme Court, so let’s at least make the time more enjoyable by making vicious cracks about the sexist, drunken, lying thug who will be occupying the seat of the formerly honored “swing-voter” Anthony Kennedy, a man who sold his soul in the form of a cushy appointed position for his son (and/or perhaps to avoid the Trump administration’s leaking of some unknown kind of embarrassing personal information) in order to retire from the bench and elevate his former clerk, ‘barfing’ Bart O’Kavanaugh.

But don’t despair. The laws of health and actuarial realities suggest that the looming five-seat conservative majority we’re facing could be a lot shorter than the 20-30 years pundits are foreseeing. The obese Justice Thomas, 70, does not look like a man trying to tack extra years onto his predicted life-span. In fact, he closely resembles most his mentor Scalia, another fat jurist who bought the farm at 79 after engorging himself at a shrimp cocktail buffet and suffering a massive heart attack in his sleep while on a luxurious all-expenses-paid junket at a Texas hunting resort. Justice Roberts, 63, also has health issues — in his case epilepsy, which has caused him to suffer at least one serious fall. And Justice Alito, by all accounts healthy, is nonetheless 68, an age where anything can happen (as I at 69 can well attest). As for the oldest member of the liberal cohort on the bench, Justice Ruth Ginsberg may be 85 and well past the average lifespan for American women or 79 years. But anyone who has watched “RBG,” the inspiring and entertaining documentary film about her, and has thus observed her going through her impressive daily one-hour gym workout paces with her trainer —a workout which includes curls and planks and other strenuous exercises many much younger people would find challenging — will probably agree with me that this birdlike but sharp-witted woman is not likely to be taken from us or the SOTUS bench any time soon.