I once did know a President
A way down South, in Texas.
And, always, everywhere he went,
He saw the Eyes of Texas.

Sing me a song of Prexy, of days long since gone by.
Again I seek to greet him, and hear his kind reply.
Smiles of gracious welcome
Before my memory rise,
Again I hear him say to me, “Remember Texas’ Eyes.”

(This was the last song JFK ever heard. President Kennedy was serenaded by the Texas Boys Choir in Ft. Worth on the final morning of his life.)

DALLAS -– A day before Dallas paused to observe the 50th anniversary of President Kennedy’s assassination, crowds already began to gather in Dealey Plaza. By early afternoon Thursday, more than 1,000 people milled about the historic murder site in downtown Dallas.

Gayle Newman, now 72, was an eyewitness to the assassination. She returned again to Dealey Plaza today with her husband Bill (who also witnessed the murder up close) and their family. “I’ve never seen so many people here at one time,” she said in genuine amazement. The Newmans are seen in assassination film footage throwing themselves upon their children as shots rang out.

People came from all over the world to Dallas for the anniversary. 43 year-old Cecile Hermier arrived Tuesday from Dijon, France. “This was my promise I made to myself when I was 13,” she said.

She has since visited JFK-related sites in Boston, Washington, Los Angeles (to research the RFK assassination), Ireland, Berlin, and finally, Dallas. She’s already been to the Sixth Floor Museum, the Texas Theatre in Oak Cliff, and toured Parkland hospital to see the place where both Kennedy and his alleged assassin died.

“I love that you are not really celebrating the assassination, but his life and legacy,” she said. “I wish the Kennedy family would give some sign to Dallas that they have forgiven the city. They will not be here, but I am proud to be here.”

Indeed, no Kennedys turned up in Dallas over the weekend. Two of John F. Kennedy’s cousins – Kerry and Kevin McCarthy – were the only family members who came to mark the solemn anniversary. Both were in town to speak at the JFK Lancer conference.

59 year-old Long Beach lawyer Jeff Gold strolled around Dealey Plaza showing off his tattoos of the Kennedys (John, Jackie and Robert). He also had a poignant quote tattooed on his left forearm from JFK’s June 1963 American University speech that read, “What kind of peace do I mean, and what kind of peace do we seek?”

“There’s a mixed feeling about this — we’re commemorating a murder.” Gold remarked. “It’s both interesting and gauche. But that’s what makes America great.”

Speaking of gauche, the first thing I noticed as I looked around Dealey Plaza was road construction on Elm Street and the overwhelming stench of fresh asphalt. But this wasn’t just any run-of-the-mill fixer-up street project. The reason for the frantic last minute re-paving was to erase the “X” which has for several decades marked the spot where Kennedy was fatally wounded. 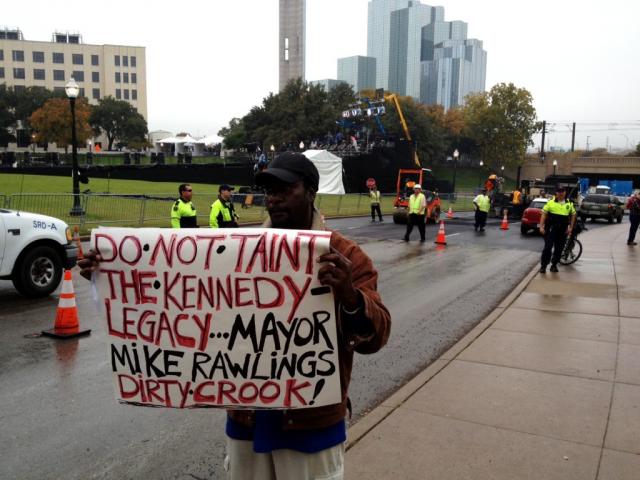 -– President Kennedy to his wife Jackie on the morning of November 22, 1963

The city of Dallas’ inept – and often infuriating – management of the JFK 50th anniversary has been a hornet’s nest of controversy locally for almost two years now. The Dallas Observer’s Jim Schutze provides the most entertaining coverage of this three-ring circus, certainly. On an almost daily basis, Schutze holds Mayor Mike Rawlings’ feet to the fire and roasts city officials to a crisp with each new mind-bogglingly boneheaded decision they make.

Schutze — often a lone voice in the wilderness of Dallas media — was the only reporter to cover a federal civil rights lawsuit earlier this year exposing emails and other communications proving the Sixth Floor Museum at Dealey Plaza was directly involved in repeatedly arresting and jailing noted JFK conspiracy author Robert Groden. Not once, not twice, but 81 times. A federal judge agreed the ongoing police harassment was a clear violation of Groden’s First Amendment rights. Obviously somebody in power really wanted Groden to shut the hell up.

The city, working hand-in-hand with Dallas’ elite old guard (most of whom are rabid Republicans, incidentally) and the Sixth Floor Museum, has done everything in its power to control the spin of how the 50th anniversary would be portrayed to the public. If a few dissenting voices got silenced, or some civil rights were trampled along the way, the city reasoned, it was all for a good cause. The official Warren Commission conclusion, and the reputation of Dallas, Texas, must be protected at any cost.

Friday was the first time the city of Dallas officially observed the anniversary. Dealey Plaza – a public park funded by taxpayer dollars – was sealed off behind barricades. 5,000 tickets were made available through a lottery, and only to in-state residents. To apply for a ticket, individuals had to give up all their personal information to the Dallas Police Department and submit to a background screening by the Department of Homeland Security. This alone kept many would-be attendees away. Too many hoops to jump through; too much of an invasion into their Fourth Amendment right to privacy.

Tight security? You bet. Police officers closed off streets near Dealey Plaza, creating a gnarly traffic clusterfuck for downtown commuters. Anyone without a golden ticket or media credentials was kept away from the plaza. (Media credentialing was tightly restricted, too; only mainstream corporate media outlets were granted access by The Powers That Be.) Police and homeland security officers waded through the crowds with bomb-sniffing dogs. These bad boys meant business. 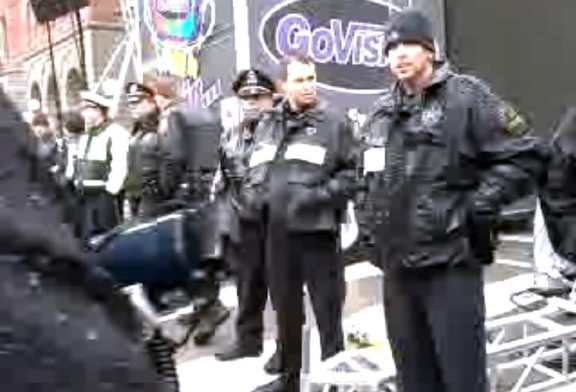 The weather didn’t exactly offer a friendly welcome to JFK tourists, either. A powerful cold front had moved in the night before, dropping temperatures from 70 degrees to the low 30s. Brutal, gusty winds came howling out of the north.

By Friday morning sleet was falling. Event organizers were expecting hundreds of people to watch the official ceremony on various jumbotron screens around downtown Dallas, but only a few dozen people braved the cold in those venues.

Like any real journalist who doesn’t swallow spoon-fed gubbermint pap and regurgitate it into a story, I chose to skip attending the city’s official shindig in Dealey Plaza. Credentials, schmedentials. Who wants to sit through a bunch of boring speeches and a naval glee club in the freezing rain, for cryin’ out loud? I hungered to talk to the riff-raff, the locals, the out-of-towners, the popo, and of course, the conspiracy buffs.

The real action was outside Dealey Plaza. That’s where I’d find the truth. Or at least, a hell of a lot more truth than I’d ever get from the mouth of a Dallas politician.

Follow TCBH’s Lori Spencer into the streets of Dallas – and directly into the fracas between protesters and police – tomorrow at This Can’t Be Happening!