It’s no surprise that the avowedly right-wing FOX ignored this incident, but the liberal-leaning MSNBC ignored this story also. 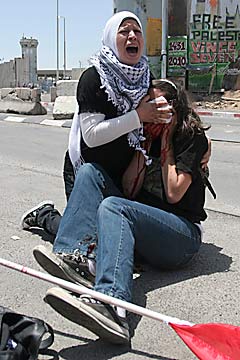 The blackout of this partial blinding of an American citizen darkens the already black eye the mainstream American news media has giving itself by its crimped coverage of the deadly Israeli raid on that flotilla attempting to bring humanitarian supplies to the Israeli-besieged Gaza and of the international fallout in the wake of that illegal raid.

The same major U.S. newspapers that found space during the two weeks after that May 31st assault in international waters for over 1,200 articles about the Tea Party or that “movement’s” darling du jour Rand Paul, carried only 58 references to the American-born teen killed during that raid, according to a review of articles in the LexisNexis database of U.S. newspapers and wires.

So, what would explain why the fatal shooting of Troy, NY-born Furkan Dogan’s merits only one-ninth of the 500+ article coverage devoted to prattle from Sarah Palin, all of which was published during that same two week post-raid period?

Maybe it’s the fact that the 19-year-old Dogan, who had dual US/Turkish citizenship, lived the last 17-years of his short life in Turkey. Did his “Turkishness” trump the news that autopsy results showed the young Dogan had died from multiple gun shots including four shots to the head, one of them from the back?

Or maybe this minimalist coverage of Dogan’s death, as documented by a Fairness & Accuracy In Reporting (FAIR) anylisis, results from the fact that much of the “U.S. press coverage takes Israeli government claims at face value…”

If FAIR’s criticism that the media exhibited a lack of “skepticism” toward Israeli government spin is on target, maybe media managers simply embraced Israeli government claims that their crack commandos only boarded the Mavi Marmara armed with paint-ball guns and small caliber pistols, and then concluded that perhaps Dogan must have died either from gunfire from his fellow peace activists, or that he had shot himself four times in the head?

FAIR cited a Washington Post editorial as an “appalling” example of the U.S. news media’s penchant for reporting on the Israeli assault exclusively through Israel’s eyes.

That Post editorial characterized participants in the flotilla as a “motley collection,” deserving no sympathy due to their ulterior motive on “provoking a confrontation.”

Acknowledging that the Israeli raid was “misguided and badly executed,” this editorial in one of the nation’s major newspapers (a paper that did not report on the blinding of Emily Henchowicz) took a pro-Israeli perspective, inferring that calls for an international investigation into the flotilla raid could potentially become part of a campaign to “de-legitimize the Jewish State.” Such language is a talking-point lifted straight from the Israeli government and its American lobby, the American Israel Public Affairs Committee (AIPAC).

Irrespective of the sympathy many Americans have for Israel, the Ethics Code of America’s Society of Professional Journalists states that journalists should: support the open exchange of views, even views they find repugnant.

Any fair-and-balanced report on the flotilla raid would have to have to include the perspective of flotilla participant and Israel Parliament member Hanin Zoabi, an Israeli-Arab, which ran in an AP article, and which was thus available to virtually every news editor in the country. In that AP story, which ran on June 10, she said, “The Israeli military is like a rapist that gets scratched and then blames the victim…Israel acts like a bull.”

According to a LexisNexis review condcted three days later, Zoabi’s words had still not been published in any major American newspaper.

Many American journalists – like many Americans – may feel Israel is justified in taking military actions in its professed self-defense, even as other Americans might consider those actions to be war crimes. Yet the point remains that support for the Israeli position does not justify suppression by the media of information integral to the story that conflicts with that position. At that point, the “news” becomes simply propaganda.

As George Curry, columnist for the BlackPressUSA site, noted in a recent article about the FAIR analysis, “For years, Palestinians have been unable to get their side fairly reported in the U.S. media and the latest international incident is yet another example.”

The critiques of Curry, FAIR and many others about the pro-Israeli/anti-Palestinian slant in America’s news media echoes a decades-old finding about news media failings to adequately cover race-related matters in the United States.

America’s news media have “not communicated to the majority of their audience – which is white – a sense of the degradation, misery, and hopelessness of living in the ghetto,” stated the March 1968 report of the Kerner Commission, which examined the causes of urban riots during the 1960s.

“If what the white American reads in the newspapers or sees on television conditions his expectations of what is ordinary and normal in the larger society, he will neither understand nor accept the black American,” the Kerner Report noted, concluding that slanted news coverage had “contributed to the black-white schism in this country.”

Slanted coverage on Palestinian issues similarly deprives Americans of the context needed to understand the complicated controversy that keeps the Middle East volatile and keeps America as a primary target of terrorists.

While accounts of that blinding injury to Emily Henchowicz are available in the blogosphere, the Inter Press Service is the only major U.S. news organization listed in the LexisNexis database to carry a story specifically reporting on the incident.

A June 1, 2010 IPS report from Ramallah stated that Henchowicz “…appeared to be deliberately targeted when a teargas canister was fired at her head, causing her to lose an eye.”

That same IPS article included context about IDF personnel regularly violating regulations barring firing those powerful gas canisters directly at protestors…violations that have produced in a number of deaths and serious injuries.

That Society of Professional Journalists Ethics Code urges journalists to “Tell the story of the diversity and magnitude of the human experience boldly, even when it’s unpopular to do so.”

The failure of many American media organizations to adhere to SPJ Code provisions produces the dynamic of: text without context is pretext.