“I regret to inform you…”

Late last May, Reniya Manukyan, the widow of IbragimTodashev, publicly disputed a claim by the FBI that her dead husband was a murderer. Two months later, Manukyan received a letter from her bank informing her that her personal account was being cancelled. She had a month to withdraw her money.

Her “offense”?  Neither the bank nor the FBI will say.

Manukyan was widowed May 22 by seven bullets fired into Todashev under suspicious circumstances by an FBI agent while he was being held and interrogated in his Florida apartment by several agents and Massachusetts State Police troopers.

But Manukyan provided an alibi for her dead spouse: bank records of purchases he had made in Atlanta on Sept. 11, 2011, the day of the killing.

After she revealed publicly that she had those records, Manukyan received a bizarre communication from her Atlanta bank. The message, mailed on August 28, 2013, informed her bluntly that her account was being cancelled. No reason was given. 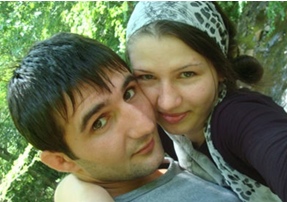 Reniya Manukyan's bank account was closed after she said account records proved her husband, Ibragim Todashev, killed by the FBI during an interrogation, was in Atlanta at the time of a 2011 Massachusetts murder the FBI is trying to pin on him

“I regret to inform you that SunTrust is no longer able to provide the financial services you require. As a result, we ask that you immediately close your accounts.

“SunTrust continuously reviews its products, markets and client relationships to ensure that we are able to provide the best possible client service while also meeting our corporate business objectives. There are circumstances where the company will identify a specific account relationship that no longer meets these criteria. In the best interest of our clients and SunTrust, the company will request that those accounts be closed…”

An Attempt to Block Evidence?

SunTrust’s Mansonhing refused to answer questions when WhoWhatWhy called her for an explanation. She said she couldn’t talk about client accounts. She hung up when she was asked to explain the company’s general policy about terminating accounts and whether the bank had received a request from the FBI to close any account. She did not answer when we called back.

Likewise, the FBI did not return several calls requesting information about whether it had sought to have Manukyan’s account closed…

For the rest of this article by DAVE LINDORFF, please go to: www.whowhatwhy.com