A revealing page-one article in today’s New York Times (“Tap on Merkel Provides Peek a Vast Spy Net”) reports on how the NSA’s global spying program, dating back at least to early in the Bush/Cheney administration, was vacuuming up the phone conversations (and no doubt later the internet communications) of not just leaders like German Chancellor Angela Merkel, but opposition leader Merkel before her party took power in Germany.

As the Times puts it, the phone monitoring, which actually dates back to the Cold War Era before 1990, “is hardly limited to the 35 leaders of countries like Germany, and also includes their top aides and the heads of opposing parties.”

That’s pretty far-reaching, and the paper says that it has learned, primarily courtesy of revelations from the documents released by fugitive whistleblower Edward Snowden, that the spying went even beyond that, to target up-and-coming potential leaders of so-called “friendly states.”

But the Times buys without question the explanation offered by professional liar James R. Clapper, the director of national intelligence and ultimate head of the embattled National Security Agency, that the NSA’s spying on leaders and potential was and is and has been, first of all, well known to presidents, and secondly that its purpose was simply to see “if what they’re saying gels with what’s actually going on, as well as how other countries’ policies “impact us across a whole range of issues.”

That’s pretty broad. The first explanation is really a euphemistic way of saying the NSA wants to see if American’s purported friends and allies are lying. The second is a euphemistic way of saying that the US is spying to gain inside information about its allies’ political goals and strategies, and probably their negotiating positions on things like trade treaties, international regulations, etc.

What the Times does not ask in its entire report on this spying program on leaders and potential leaders is whether there could be another motive for this extraordinary spying campaign on leaders: blackmail.

Nor does the Times ask the next obvious question, which is: If the NSA is spying on foreign leaders so widely and thoroughly, actually recording the conversations, not just the numbers being called, and submitting the recordings to keyword searches, isn’t it likely doing the same thing to leaders in the US? And if it is possible to imagine that the NSA is enabling the blackmailing of foreign leaders, isn’t it equally possible that the same thing is going on domestically?

Following that line of thinking, we should next ponder who would be doing the blackmailing? There has been some suggestion from the White House that the president “didn’t know” about the spying on Merkel and other leaders. Clapper and NSA Director Keith Alexander have denied that the president was kept in the dark about its spying on leaders of friendly nations, but both men are known to be liars regarding the NSA’s actions. Clapper indeed was forced to admit that he lied to Congress — and right there we have prima facie evidence that the NSA has been blackmailing members of Congress, or at least that the members of Congress think they are vulnerable to blackmail. This is because despite Clapper’s outrageous offense of lying to the Congress about his agency’s massive spying program, not one member of either Senate or House, or of the two Congressional Intelligence Committees, has called for a contempt resolution against him. 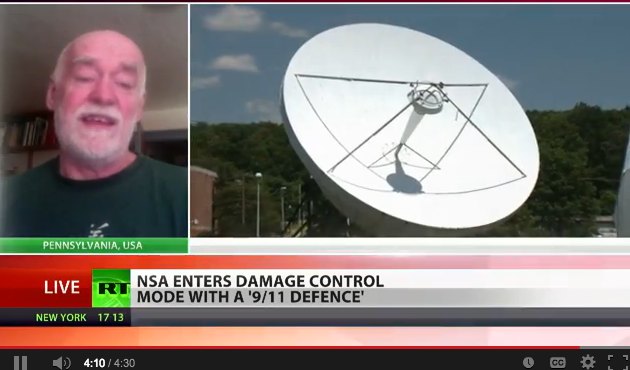 Hear Dave on RT-TV today, walking about the possibility NSA spying on leaders is about blackmail (click on the image)

How can that be? Members of Congress routinely cite or threaten to cite sports figures for contempt of Congress for lying to senators or representatives about their steroid use, and yet when the head of the nation’s spying organization network lies about an unprecedentedly huge spying operation, they just let it pass?

There has to be a reason for such cowardice in the face of such an institutional insult.

It is nothing short of astonishing that with all the crimes being committed against the Constitution by this administration, the illegal war making, the spying on citizens, the lying by the White House, and the abject regulatory surrender to the banking industry — an industry universally reviled by the American public — that not one member of Congress has had the courage to file an impeachment resolution, the way Rep. Henry Gonzales (D-TX) did against George H. W. Bush in January 1991, when Pres. Bush the first launched the first US war on Iraq. It is nothing short of astonishing that in this age of routine Constitutional abuses and routinized corporate crime, there has been no Sen. Wayne Morse to question the whole premise of what is being done. Recall that it was Sen. Morse (D-OR) who, along with Sen. Ernest Gruening (D-AK), voted against the Gulf of Tonkin resolution which launched the US into a massive full-scale war in Indochina. (Apropos of this issue of blackmail, after Morse voted against the fraudulent Tonkin Resolution, and as he continued his vocal opposition to the Vietnam War, it was later learned that President Lyndon Johnson ordered the FBI to surveil the senator in an effort to dig up information that could be used to silence him or defeat him politically.)

I would argue that it is almost a certainty that the NSA spying on foreign leaders is just the tip of the political spying iceberg, and that the real horror is that it is spying on domestic politicians, and probably dropping hints to make it clear that it is in a position to blackmail them. On behalf of whom the NSA may be acting is the question. Ordinarily one might assume it would be on behalf of the President and the White House, as was the case during President Johnson’s tenure. But in the present era, it may be that there are others who are in charge. This might explain the phenomenal weakness and lack of political will and courage of the current president. President Obama surely knows that the voters who elected him want an aggressive job creation program, want an end to foreign wars and a scaled down military, want a break-up of the big banks, and want national health care, not an insurance-industry-run Affordable (sic) Care Act that compels them to buy insurance from a private company, and that allows insurers to continue to suck profits out of the system. He knows too that the public wants not cuts in Social Security and Medicare, but expansions of both programs and improvements in benefits. Why would the president undermine his own legacy and the future prospects of his own party by failing to press for any of these issues? Why would he continually talk about a “Grand Bargain” that would involve cutting benefits to the poor and the elderly — two bulwarks of the Democratic Party’s majority.

Could it be that he too is afraid of blackmail, or that has he already been successfully blackmailed?

I of course don’t know the answer to these questions, but at this point they clearly need to be asked and contemplated.

Years ago, I had an opportunity, with some journalist colleagues, to have an off-the-record dinner with Stanley Sporkin, currently a retired federal judge, but at the time the head of the enforcement division of the Securities & Exchange Commission (SEC). One of the members of our group asked him how the SEC was able to discover some of the baroque corruption schemes that it was prosecuting (this was back in the last year of the administration of President Jimmy Carter, when the SEC still actually prosecuted corruption on Wall Street). Sporkin told us that members of his enforcement staff would actually sit around and dream up ways to defraud investors. Once they’d imaged a crooked scheme, they’d go out and look for evidence of it and, typically, they’d find someone doing it.

The same, I suspect, is true of the NSA’s incredible new technological spying capabilities. If you can imagine that Kafkaesque agency doing something, it’s almost certain that the NSA is doing it. And right now I’m imagining massive NSA domestic and foreign political blackmail, on a staggering and unprecedented scale. And by the way, another NSA whistleblower, Russell Tice, has said that he was aware while at the NSA, that the agency, back in 2004, was spying on Barack Obama, then just a Democratic Senate candidate from Chicago. Besides, even if members of Congress and judges on the federal bench just think they’re being spied on and are thus vulnerable to blackmail, they are not likely to step out of line and vote or rule the wrong way.

The only remaining question is who is behind all this spying and potential blackmail? Is the NSA itself a rogue operator acting to protect and expand its own power? Perhaps, but more likely, I would guess, is that some larger “permanent government” composed of the heads of key corporate interests — perhaps key leaders of the financial and the military/intelligence sectors and a few other key industries like the oil companies — is pulling the strings.

Maybe Snowden has the answer to this question. If not, we’ll just have to wait for the next courageous whistleblower to come forward.