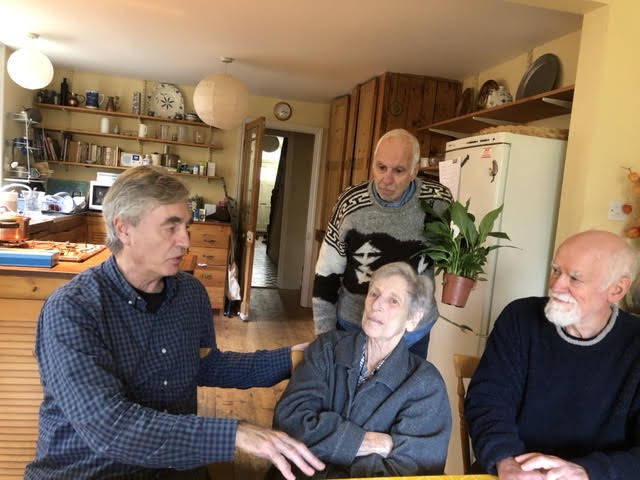 Q Joan, how do you think the world would look today had Ted Hall not given vital information to the Soviets, in order to avoid a monopoly of nuclear power, seeking a balance in the world?

“I heard a four-year-old boy in a train station the other day say: ‘We’re going to have a war with Russia.’ Isn’t that the world today? 77 years after World War II and Russia is capitalist?”

Joan refers to the Soviet Union being the U.S.’s enemy before and just following World War II because it was communist, yet it is still the enemy even when it converted three decades ago to U.S./England/EU’s economy of choice.

Surely, Western capitalist countries cannot fear that it is behind the Russian Federation when it comes to a military position. The U.S. has 800 military bases in 70+ countries, plus occupying troops at “military facilities” in another 90 countries. The U.S. funds 50 military bases for several countries where it also has its own troops. Many of these are in the U.S. “backyard,” especially in Colombia and Central America.

The U.S. has 95% of the world’s foreign bases. It also has scores of ships sailing around the world with nuclear weapons. Then there are the 4,154 military bases in its 50 states and 114 in its territories. It allows no foreign bases on its territory. (See David Vine’s book Base Nation: How U.S. Military Bases Abroad Harm America and the World) [1]

Q Was Ted more a whistle-blower than a spy—someone like Daniel Ellsberg with the Pentagon Papers, the scores of CIA and military personnel who came over to our side, such as Phil Agee, Edward Snowden and Chelsea Manning?

“I had a hard time accepting the term ‘spy’ for Ted,” Joan answers. “But I came to understand it, in the film context. Ted contrasted between the military-political leadership and the people, Russian and everywhere in the world.”

“Edward Snowden comes closest to what Ted did,” Steve says. While Ted was not a military/CIA patriot such as Snowden in his youth, both wanted to help the U.S. when Nazi Germany was a real enemy and aggressor. Snowden was naïve [until he realized what secrets the U.S. was hiding from everyone]. [2]

“I was astonished by what Ted did,” Steve continues. “So incredibly heroic. Even if you disagree with his act, you have to see his true motivation and bravery.”

“We might not have been here had Ted not done what he did,” Dave says. “Having seen the horrors of the Vietnam War as a war resister, the U.S. is only interested in expanding its global power. As Muhammad Ali retorted to his critics for refusing to fight the Vietnamese, ‘No Vietcong ever called me a Nigger.’ Had Russia not had the atomic bomb, the U.S. could have destroyed Vietnam and any other country.”

[To read more to to Cover Action Magazine: Is History Repeating Itself? And Who Will Be Today’s Ted Hall? An Interview with the Principals of “A Compassionate Spy” | CovertAction Magazine]