The latest in a series of troubling mishaps at the aging Indian Point nuclear power plant a week ago Saturday prompted a shutdown or “trip” of one of the two operating reactor units on the site and the dispatch of inspectors from the Nuclear Regulatory Commission.

Governor Andrew Cuomo’s office made the announcement that the reactor was “forced to shut down,” but New Orleans-based Entergy Corp., which owns the plant, claimed there was no release of radiation or chemicals from the incident. The company said magnets holding control rods failed when power was lost, causing the rods to sink into the reactor vessel as designed and shutting down the nuclear reaction. Control rods, which absorb the radiation that occurs during fission chain reactions are a critical feature of nuclear reactors that allow the nuclear reaction to be adjusted or shut down altogether.

Coincidentally, at the time of the incident, Nuclear Regulatory Commission Chair Stephen Burns was visiting the plant. The NRC reported on Monday that the power loss was caused by a short circuit in a roof fan. Cuomo, who has been calling for closure of the 40-year old plant, said that he had “directed the Department of Public Service to investigate and monitor the situation.”

The second of the two working nuclear generating units at Indian Point was not effected and remains on line. Burns was met on his visit by a demonstration on Monday at a hotel in Tarrytown, NY where he was holding meetings. The protesters are opposed to construction of a natural gas pipeline that is intended to pass near the nuclear plant. The pipeline has been approved and construction will begun in March. Protesters say they fear a potential gas explosion might threaten the nuclear plant.

This is the second incident at Indian Point this year. In May an electrical transformer exploded releasing 3000 gallons of oil into the Hudson River. The catastrophic failure ignited the oil and black smoke billowing from the fire was visible for miles. A report by the NRC released earlier this month said that the transformer fire itself was never a threat, but the subsequent flooding of an electrical switching room may have caused a loss of power to the reactor. 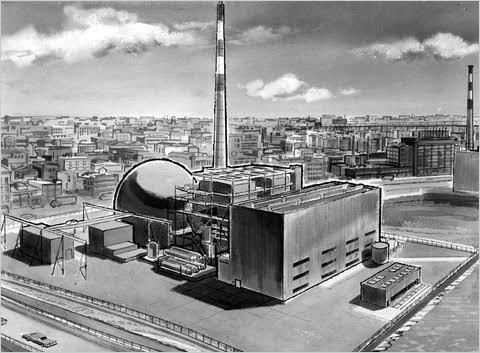 Thing could have been worse: The giant nuke power plant Con Ed once planned to build right in New York City, fortunately cancelled

A little-known fact of nuclear reactors is that they must by law always be connected to a power source independent of the reactor itself. The outside power allows the reactor to be controlled even if it has to be shut down. Although Indian Point was never in danger of a core meltdown, a loss of outside power has been implicated in some of the worst nuclear disasters, such as those at Fukushima where a tsunami flooded the electrical system and Chernobyl where outside electricity was deliberately cut off as part of an experiment that quickly raged out of control. A meltdown happens when a reactor core becomes so hot from a loss of cooling water that the fuel elements melt into an uncontrollable radioactive blob. A partial meltdown at Three Mile Island in 1979 sparked the anti-nuclear movement and made it much more difficult to build nuclear reactors in the United States.

According to the NRC report on the May incident, when sensors detected a rise in temperature caused by the fire large “deluge valves” were triggered flooding the area with water to put out the fire. The water began to rise, flowing under a door and flooding the “swichgear” room where it pooled on the floor. Sensors designed to shut off the valves, as well as a drain in the room and storm drains outside the building were discovered to be partially obstructed by debris. The rising water threatened the electrical equipment where power is transmitted from offsite of the nuclear plant. According to the Union of Concerned Scientists if the water had risen a few more inches it could have caused a “blackout condition” at the plant.

Problems with drains at Indian Point should have not taken its operators by surprise as happened last weekend says the UCS. A report by the NRC in 2012 had issues a “Green” alert, meaning that a problem was found to exist, but not an especially serious one, namely the blocked drain. According to the UCS the drain was subsequently tested but in a non-rigorous manner that failed to isolate the problem which was discovered after the transformer fire. The UCS said that such flooding has been a problem at numerous reactors but is generally considered low priority by the NRC. In 1994 Entergy admitted potential flooding caused by water pipes breaking in an earthquake was a significant possible problem at Indian Point. The NRC, however, didn’t require plant operators to make changes and nothing was done by Entergy to address their own findings.

The 40-year old operating reactors at Indian Point are under review for relicensing by the NRC. Entergy is requesting a 20-license extension. There are currently 99 operating commercial nuclear power reactors in the United States. About 30 percent of New York State’s electric is generated by nuclear plants. Governor Cuomo has come out in support of closing down Indian Point because it’s the only nuclear facility operating in close proximity to one of the most densely populated places on the planet. Entergy recently announced it was closing its money-losing Fitzpatrick nuclear generating station in Oswego, New York. Cuomo in that instance wants to keep that plant operating, which has led to a bitter dispute with Entergy since he wants to close Indian Point, which is a profitable enterprise.

Throughout the United States most of the aging fleet of nuclear reactors have quietly had their licenses extended, some for up to 80 years — longer than an average human lifespan — and, critics say, longer than the durability of the steel and concrete used to construct them. The biggest problem with these reactors has been disposal of their waste. Because there is no suitable place yet for permanently storing commercial nuclear waste, Federal law requires commercial plants to keep spent fuel stored on-site in pools of water or specially designed dry casks. Approval for use of an underground dump already built near Las Vegas for long-term storage of the waste has been blocked in Congress because of public opposition, and currently several private dumps have been vying for the right to temporarily store highly-radioactive commercial waste until a permanent repository gets the OK.

Although nuclear reactors are touted as “carbon free” and therefore not contributing to global warming, that doesn’t take into account that mining and processing of uranium, construction of plants and waste disposal actually produce large amounts of carbon as well as the dangers of radiation releases or accidents.

Indian Point Park had been the name given by boosters to a pre-World War II getaway for working class New Yorkers that was eventually sold to Con Edison. A reactor at Indian Point was first proposed in 1954. The economics of power generation at the time favored plants situated as near as possible to consumers. this would cut the cost of transmitting the electricity by millions of dollars. Con Ed, the main utility in the New York City region, was planning to eventually build 6 nuclear plants at Indian Point, also one on an island near New Rochelle and another in Ravenswood, Queens across the East River from 68th St. in Manhattan. In the end two plants were built at Indian Point, Units 1 and 2. The New Rochelle and Ravenswood plants were never built.

The Queens reactor which would have dominated the Queens shoreline as seen from Manhattan was cancelled after vigorous opposition by the local community. The opposition was the first against nuclear power to be based on safety issues and marked the beginning of local protests against nuclear power facilities across the United States. Con Edison claimed that they could counterbalance the proximity of millions of people to their reactor by constructing robust emergency features such as a concrete and steel containment vessel, and an emergency cooling system. However government scientists who examined Con Ed’s plans soon saw the location was “lousy” and that leaks of radiation were inevitable. They concluded that even the smallest release would have dire consequences in an urban setting. In 1964 Con Ed withdrew its proposal.

Indian Point 1 was shut down in 1974 because its emergency core cooling system was outmoded. Spent fuel was removed by 1976. Unit 2 and 3 were completed in 1974 and 1976. The original 40-year license for Indian Point Unit 2 expired in September 2013 and the license for Unit 3 is set to expire December 13. Entergy is still allowed to keep operating the reactors until NRC decides on the renewal application.

Local movements opposed to the plants have cited the their gargantuan water needs which total 2.5 billion gallons a day, its proximity to New York City and other population centers and a maze of newly discovered earthquake faults running underneath the plant. Entergy counters that attacks on the safety of the plant are ”irresponsible” because it has, in their words, “run safely for the past 30 years” and has received millions of dollars in safety upgrades.

New York’s Director of State Operations Jim Malatras sees it differently. He says, “The NRC should, on an expedited basis, deny Entergy’s application for relicensing of the Indian Point Facilities,” According to him, operating the plants so close to the city for another 20 years “puts too many New Yorkers at risk.”