During the Vietnam War, which US forces fought from 1960 through 1974, and which cost the lives of several million Southeast Asians and 58,000 Americans, eight American journalists died. Not one of them was killed by American fire.

In the Iraq War, 136 journalists were killed. At least 15 of them — about 11% of the total — were killed by US forces, sometimes apparently with deliberate intent. (Consider that if some 500,000 US troops rotated through Iraq over the course of the way and 4000 of them were killed, that meant soldiers had a 1:125 chance of being killed there. With 136 dead journalists, there would have had to be more than 14,000 journalists covering the war for them to have the same odds of getting killed.)

In Afghanistan, nine journalists have been killed, at least one by US forces, and in that case, the killing was deliberate, though it is unclear whether the victim was known to be a journalist.

Why this might be the case is hard to say, but it seems that an antipathy towards journalists within the military may have something to do with it.

Back in 1983, the US, in one of the more ludicrous military actions in its long history of war, invaded the tiny Caribbean island of Grenada, on the pretext that it feared Cubans were building a military airbase there (actually Cuba had sent construction workers to the impoverished isle to help the country build a better commercial airport so as to improve its tourism business). During that invasion, which was conducted with a total media blackout despite almost no opposition (the main “enemy” putting up any resistance was the Cuban construction workers! There were no Cuban troops there), a group of seven journalists, including a reporter from the New York Times, attempted to reach the island on a small boat. They were blocked by a US destroyer, which warned them over a loudspeaker to turn around or be “blown out of the water.” The journalists gave up and retreated.

That little “war,” which was conducted from beginning to end with no reporters allowed in the battle zone, marked the beginning of a new relationship between the Pentagon and the press — one where the military maintains complete control over access and information, both what is provided to the media, and what the public gets to learn. 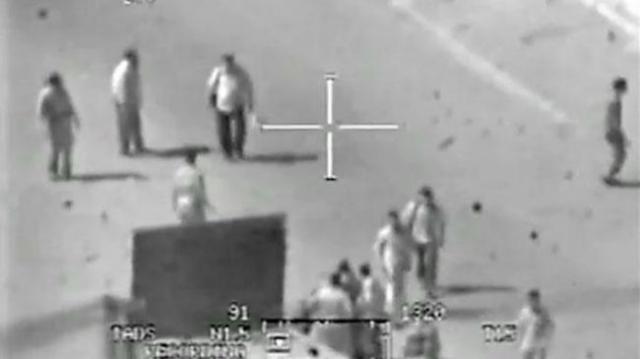 When the US launched its invasion of Iraq and Iraqi-occupied Kuwait in 1991, it required all journalists covering the attack to be “embedded” with US forces. Prior to that time (with the exception of the Grenada War mentioned above), journalists, for example in Vietnam, were free to go anywhere in the war zone and to report what they saw. They were not tied to, or restricted to, specific military units. They faced risks, but the risks, as evidenced by the deaths of war correspondents, were caused by either land mines they encountered, or by enemy fire, not by fire from US forces.

That all changed with the Iraq War in 2003. At that time, the Pentagon continued with the same methods developed in the Gulf War, requiring journalists to be “embedded” with specific invading, or later, occupying units. Those journalists who chose not to be embedded were warned that they were putting themselves at much greater risk of being targets.

We know, from documents that were obtained and released by Wikileaks, that the Bush-Cheney administration considered, but fortunately eventually decided against, bombing the main studio and office building of Al-Jazeera Television in Qatar in the early days of the 2003 invasion of Iraq. President Bush and Vice President Cheney were known to be furious at what they considered to be the biased reporting on that war by the Arab-language TV news organization. This aborted plan to blow up the whole station, which would have resulted in huge casualties, casts in a very suspicious light the rocket and machine gun attack on the Al-Jazeera bureau in Baghdad on April 8, 2002, during the US assault on Iraq’s capital city just a few weeks into the invasion. In that attack, Tareq Ayyaub, an Al-Jazeera cameraman, was killed and another journalist was injured. The US claimed it had inadvertently struck the Al-Jazeera building because of “shots fired from nearby,” but an investigation disclosed that Al-Jazeera had given the coordinates of its facility to US forces so it was known to be a press site, not a military target.

Furthermore, there was another attack that same day, this time by a US tank, which fired a 120 mm round at a balcony of the Palestine Hotel, where US forces knew that virtually the entire foreign press corps were holed up during the invasion. Killed on the balcony were Reuters cameraman Taras Protsyuk and the Spaniard Jose Couso of Telecinco TV.

The ruthlessness of the slaying of journalists was exposed for all to see when the whistle-blower outfit Wikileaks released the now famous video it obtained from the gunsight camera of a US helicopter, whose crew opened up with machine gun fire on a group of men and two children in a Baghdad square. Two of those killed were cameramen working for Reuters. One of the two was literally hunted down and machine gunned after, already gravely wounded, he tried to crawl away, unarmed, to safety. The crew could be heard laughing as they killed him.

Several journalists were shot and killed at checkpoints by trigger-happy US forces, some, like Ali Abdul-Azia and Ali al-Khatib, two reporters with the Arab TV station Al-Arabiya, as they were driving away from the checkpoint on March 18, 2004, or Asaad Kadhim, a journalist with the Iraqi TV station Al-Iraqiya, shot as he was filming at a checkpoint near Samara in Iraq.

Reporter Ahmed Wael Bakri of Al-Sharqiya TV, a local station partly funded by the US, was killed by US troops because he “failed to pull over” for a US military convoy — a fate suffered by many an ordinary Iraqi civilian.

In Afghanistan, BBC journalist Omaid Khpalwak was killed by one US soldier after he had already been shot and wounded by another, despite the fact that he spoke English and had been trying to retrieve some ID from his jacket pocket. Khpalwak had been hiding for safety during a firefight he had been covering when he was initially shot by a US soldier. The second soldier had gone over to “check him out.”

Certainly in the fog of war, being a war correspondent is a dangerous profession. Fighters on either side of a conflict, who are being fired at themselves, are not in a position or a state of mind to spend a lot of time analyzing whether someone is an enemy fighter or a journalist, or even perhaps in poor visibility conditions, whether a what someone is carrying is a camera tripod or an RPG launcher. Furthermore, plenty of journalists have been killed, often deliberately, by Iraqi resistance fighters and by Taliban forces in Afghanistan.

That said, the incidence of journalists being killed by US forces in recent US conflicts has been much, much greater than it ever was in earlier wars, such as the one in Vietnam, or in Korea or World War II, which inevitably begs the question of whether some of the journalist killing has been deliberate, perhaps with the intent of keeping journalists in line.

Certainly the White House discussion about whether to bomb Al-Jazeera’s main offices shows that there is a willingness, all the way up to the top of the US government, to view journalists as the enemy, and even to contemplate killing some of them to affect the coverage of a war. The bombing of the Al-Jazeera bureau in Baghdad in the early days of the US invasion appears to have been a brazen attempt to do just that.

In case after case, the evidence is too sketchy to say for sure that other killings of journalists by US troops were deliberate efforts to make sure other journalists stayed firmly — and safely — embedded with US soldiers, but the sheer number of those killed should at least raise the question.

Meanwhile, there is far less question of motive in the case of Israel, a close ally of the US, and a country whose military is closely linked to the Pentagon. During this latest Israeli assault and bombardment of the prison-territory of Gaza, the Israeli Defense Force fired several missiles directly at a building housing not only the Gaza Al-Aksa TV station, but a number of offices of foreign journalists. Two Al-Aksa cameramen were killed in the strike. Several other buildings housing foreign journalists have also been struck, and the Foreign Press Association for Israel and Palestinian Territories has stated that it believes the IDF is well aware of the locations of offices of foreign reporters in the territory. Israel has admitted to targeting the two Al-Aksa victims, claiming that working for the Hamas-owned station means they are Hamas “terrorists.” But as to whether the strikes on buildings occupied by foreign reporters is meant to be a message, or to keep them from covering the IDF attack on Gaza, that remains, like the US attacks on and killing of journalists, an open question.