In a couple of days, the so-called US Justice Department will be announcing an “agreement” reached with five large banks, including two of the largest in the US — JP Morgan Chase and Citigroup, the holding companies for Chase and Citibank — under which these banks or bank holding companies will plead guilty to felonies involving the manipulation of international currency markets for at least the past eight years.

This is not really a plea deal, or what in the lingo of criminals is called “copping a plea.” It’s a negotiation in which the nation’s top law-enforcement organization — the one that just sentenced a teenager to death in Boston in the Marathon bombing case, and that routinely sends ordinary people “up the river” for minor drug offenses or even tax fraud — is taking seriously these banks’ concerns that if they plead guilty to felonies they might be barred by SEC rules from engaging in many profitable practices. So — get this — the Justice Department is seeking assurances from the commissioners of the Securities and Exchange Commission that they will not enforce those rules against these particular felonious banks.

There will be fines, of course, though nothing that will even dent the profits of these megabanks, which also include two British-based institutions, Barclays and the Royal Bank of Scotland, as well as the Swiss-based bank UBS. But under these deals, not one bank executive will even be forced to quit his post, much less face jail time or even a fine. As the New York Times put it in an article last Thursday, “In reality, those accommodations render the plea deals, at least in part, an exercise in stagecraft.”

What this means is that the departure of bankers’ friend Eric Holder as Attorney General, and his replacement by Loretta Lynch, has not changed the policy announced by Holder several years back that there would be no prosecutions of the leaders of the so-called “too-big-to-fail” banks for the scandals and crimes that collapsed the US and the global economies in 2008, bringing on the so-called Great Recession that is still punishing the people of the US and many other countries. In fact it demonstrates that there will be no real prosecution of wrongdoing by these monolithic banks for crimes committed since the financial crisis either and going forward. 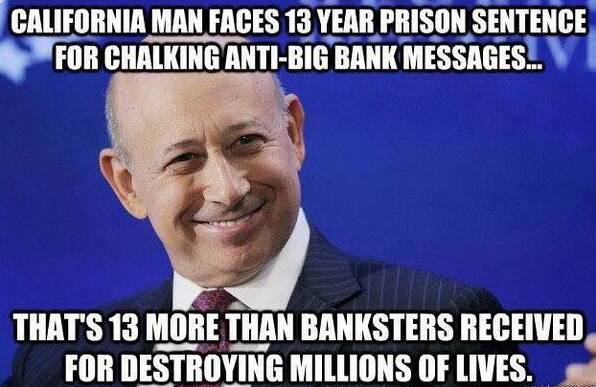 As the Times wrote by way of explanation for this refusal to prosecute the criminal banker class: “…as much as prosecutors want to punish banks for misdeeds, they are also mindful that too harsh a penalty could imperil banks that are at the heart of the global economy.”

This statement, made by the paper’s two reporters, Ben Protess and Michael Corkery, as if it were a fact, is clearly nonsense.

The big banks, far from being “at the heart of the global economy,” actually function more like tapeworms feeding on that economy. And the case in question, the manipulation of currency markets, is a good example of this. By manipulating currency markets, these banks have been doing nothing to facilitate trade and commerce. On the contrary, they have been profiteering by rigging the markets and raising the costs of doing business for all companies and for all people who need to change one currency for another. Every raw material that a company in the US buys from abroad, every product that a foreign buyer purchases from a US producer, every consumer good that a US citizen buys from a foreign supplier, costs more because of the rigged currency trading that the banks have secretly been engaging in.

How much did this massive conspiracy cost, and how much did these corrupt banks make by manipulating currencies? Here’s what Matt Levine wrote about that in Bloomberg News:

“How much money did those banks make manipulating that $5.3 trillion foreign exchange market? I don’t know! No one seems to care. The U.K. Financial Conduct Authority says ‘that it is not practicable to quantify the financial benefit’ that each bank got from its manipulations; the U.S. Commodity Futures Trading Commission and Office of the Comptroller of the Currency don’t even acknowledge that the question might be interesting.”

So that’s how the US is handling criminality by some of the largest and most predatory corporations in the US and the world today.

Compare the US to Iceland, a country that responded to the same banking crisis of 2008 by aggressively prosecuting and jailing its top bankers. This past February, Iceland’s Supreme Court upheld the convictions and sentences of four top executives of Kaupthing Bank, one of the country’s biggest financial institutions. Those bankers are will now be serving four-to-five-year sentences for their felonies, at least if they want to ever return to Iceland. A number of other Iceland bankers, including top executives of three of the country’s top banks, were convicted earlier and sentenced to prison terms.

Here’s the thing. If the government really believes that banks like JP Morgan Chase, Goldman Sachs, Morgan Stanley, Citibank and Wells Fargo are “too big to fail” because prosecuting their chief executives — or even forcing their chief executives to quit their posts! — could lead to a new financial crisis (a claim that seems totally absurd), then those institutions are simply too big to allow to exist.

And there is a simple answer to that: break the damned things up! It’s not as if these huge banks are responsible for running the US economic engine by lending money to businesses and the public. In fact, they are not doing that at all. Mostly, they are taking free money from the Federal Reserve and gambling with it, not lending it, and are putting smaller banks that actually do lend money out of business. We’d be better of if each of these huge banks became ten smaller independent banks that would have to behave like banks, and that wouldn’t have the outsize power of banks that are bigger than entire countries.

The idea that certain companies and their executives and owners are simply beyond prosecution whatever their crimes is intolerable. It should be intolerable not just in a supposed “democracy,” but in any county.

When people whose primary driving motive in life is greed, power and endless acquisitiveness — which is what we’re talking about when we consider people like JP Morgan Chase’s chairman, president and CEO Jamie Dimon or Goldman Sachs CEO Lloyd Blankfein — are told that they are beyond prosecution, it is an open invitation to rapacious criminal activity, and that is what we have witnessed in the years both running up to the 2008 financial meltdown and in the years since.

It’s past time for the American people to wake up and demand an end to this outrage. We need to be more like Iceland: Prosecute the bankers!