So President Donald Trump now pontificates that he would run into a school building to save students during a mass shooting attack even if he was “unarmed!”

This empty boast is from the same Trump who failed the bravery test during the Vietnam War by dodging the draft — not for principle but because the poor guy had “bone spurs” on one foot (he can’t remember which).

Yes, that braggadocio is on top of other asinine blather from the Oval Office occupant. Trump for example made that boast while taking another shot at the police who failed to rush into that south Florida high school during the Valentine’s Day 2018 massacre that left 17 dead including 14 students.

The unwillingness of armed cops outside that Parkland high school to rush inside to confront an assault rifle firing shooter didn’t stop pseudo Tough Guy Trump from pushing the asinine proposal to arm teachers to help stop mass school shootings. 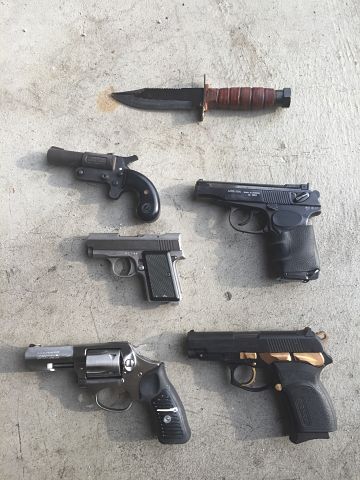 Arming teachers is a big pay day for gunmakers. It doesn't make America great or safe.

Since Trump never lets facts stand in the way of his fantasies, he doesn’t care that a study conducted by his hometown police force – – the New York City Police Department –- found police only had an 18 percent success rate in hitting a person they were shooting at if that person was shooting back at them.

That begs the question: In arming teachers, does Trump accept that teachers will almost inevitably accidentally kill a few students while trying to shoot a mass shooter, given the NYPD certified fact that even trained police, who are regularly retrained on shooting guns accurately, have such a poor ‘good shoot’ percentage in shootout situations?

Trump made that pontification about his imagined bravery under fire during remarks to a gathering of governors that included Florida Governor and Trump supporter, Rick Scott – the Republican Florida governor with an A+ rating from the NRA.

In June 2014 the NRA honored Scott for his “strong” support of gun rights. The 2014 NRA press release lavished praise on the governor for the fact that he had “signed more pro-gun bills into law – in one term – than any other governor in Florida history.”

The Florida Department of Children and Families, under Gov. Scott’s control, conducted a Fall 2016 investigation of Nikolas Cruz, the young man arrested for the Parkland Valentine’s Day Massacre.

The first two sentences of that DCF investigation stated: “Mr. Cruz is a vulnerable adult due to mental illness. He has Depression.” Other findings in that investigation raised concerns about Cruz’s of-stated desire “to go out and buy a gun.”

Despite that DCF report documenting the mentally ill Cruz’s fixation with guns, his depression, his ADHD, his cutting himself, his inability “to cope with the demands of everyday life without the use of medication” and his engagement in racist behaviors, Florida DCF authorities determined Cruz was a low risk and closed their investigation in mid-November 2016.

While Florida Gov. Scott is now harshly critical of the FBI and local cops for failing to see red danger flags flapping wildly around Cruz, Scott is silent on the failures of his DCF to follow up on their investigation, even after Cruz was expelled in 2017 from that Parkland high school for erratic behaviors.

Trump now claims he supports toughened background checks for gun purchases. Improving background checks is a good step but what about other measures to end laxity in gun laws like allowing blind persons in some states to carry guns in public?

But banning bump stocks does nothing to remove the dozens of legally sold trigger mechanisms that easily transform semi-automatic assault weapons into fully automatic guns. And then there are numerous videos on YouTube providing step-by-step instruction on how to transform semi-auto guns to full-auto with items as simple as a paper clip.

Requiring a gun owner to report a lost or stolen weapon is not an infringement on a presumed Second Amendment right. The Second Amendment is perverted when used to enable legal sales of sound suppressors (silencers) for guns. Shooting a deer with a silencer-equipped assault rifle is twisted sport.

It’s long overdue for civil society to ‘school’ the NRA on the fact that the Second Amendment is not sacrosanct. All rights have restrictions.

Enacting sensible gun control also requires recognition that gun violence is a symptom not cause. Something in and/or about America is causing violence that too frequently erupts in gunfire.

Without truly addressing the real causes of violence in America that violence will continue rather through assault rifles or table forks.