A kudo to President Obama. But just one.

If he manages to pull off an agreement with Iran on limiting that country’s nuclear fuel enrichment program in the fact of determined resistance from Republicans, Neocons, the Israel Lobby and the warmongers in both the GOP and his own Democratic Party, he will have finally earned at least some small portion of the gold in his Nobel Peace medallion.

We could reasonably ask why he thinks it’s cool to negotiate with the “Axis of Evil” nation of Iran over the nuclear issue, but not with Russia over Ukraine. After all, Iran doesn’t even have a nuclear weapon, and on the evidence, isn’t trying to build one, so these negotiations aren’t really even preventing a nuclear war; they’re just calming the nerves of some trigger happy paranoids in Israel and Washington. But Russia does have nuclear weapons, and has made it clear that if the US pushes too hard at putting NATO weapons and forces near the Russian border, or if it tries to undo the annexation of Crimea, it will use them. Shouldn’t that kind of thing call for cool-headed negotiation, instead of aggressive moves like sending offensive armaments to Kiev?

But then we have some other issues too.

If Obama really wants an agreement with Iran on limiting its nuclear fuel enrichment program, why is he being so hard-assed about ending the grinding sanctions that have been imposed on the country? I mean a deal’s a deal. If one side gives you want you want, you have to give something in return. You can’t say, okay you stop enriching uranium, dilute the stuff that you already enriched to 20%, back down to 3.5%, and shut down most of your centrifuges so you can’t make much anymore. But we’re not going to end sanctions until you have done this for a while so we know you mean it. 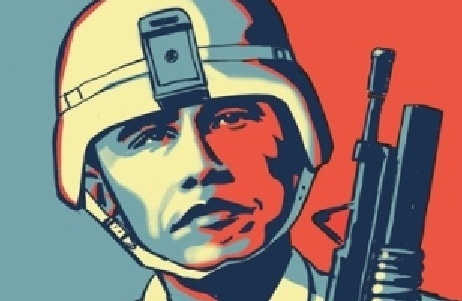 That’s double dealing, and hardly conducive to building a new relationship with a country that has good reason to doubt your own sincerity (after all, the US corporate media in reporting on this story never mention it, but Iranian antipathy towards the US didn’t begin with the overthrow of America’s puppet, the Shah of Iran. It began in the 1950s with a coup orchestrated by the CIA and British intelligence which overthrew Iran’s secular elected government — a catastrophe from which Iran has never recovered.

In fact, as part of the deal Iran probably should have insisted on an apology for that outrage, along with a promise to never again meddle in Iran’s internal politics.

Instead we have this rather bullying agreement in which a weakened Iran, faced with both tough US-led economic sanctions and a brutally low world price for oil (also allegedly orchestrated by the US and its puppet state Saudi Arabia), has agreed to severely reduce its nuclear refining capability, receiving little but promises of future lifting of sanctions in return.

The other thing, though, is this rhetoric from our Peace Laureate president threatening that if Iran doesn’t agree to the negotiated terms of this pact (and the ruling imams of the Guardian Council still have to give it their okay), it will mean war.

Where does he get off making that kind of threat? Iran, it should be made clear, is not doing anything illegal. It is a signatory to the Non-Proliferation Treaty, and as such, allows inspections of its nuclear processing facilities as well as its nuclear power plant. This is in stark contrast to Israel, a country known to possess hundreds of nuclear weapons, though it won’t admit this, and which is not a signatory of the Non-Proliferation Pact. Indeed, Israel allows no inspections of its own nuclear facilities, including the Dimona Reactor where it makes plutonium for more bombs. Iran has no bombs, and isn’t making any, yet it is threatened with war if it won’t agree not to do something it already is not doing, and if it won’t stop doing something it has every legal right to do– namely to refine nuclear fuel, as many countries, from Japan and Taiwan to Brazil and Germany do all the time with nobody making a fuss about it.

Let’s be clear here. Making a threat to attack a country that does not pose an imminent threat — and since Iran a) has no nuclear bomb and b) is known not to have a bomb-making program (something even the CIA confirms) it is no imminent threat — is a war crime under the UN Charter, to which the US is a signatory. It is one of the so-called Crimes Against Peace, which since the Nuremberg Tribunal have been called the greatest of all war crimes, since all other war crimes like the murder of civilians or torture derive from.

That is to say that even as Obama finally makes one move in line with the hoped for promise of the Nobel Committee in awarding him a Peace Price before he had done anything at the start of his first term, he is grievously mocking them and the award they gave him by committing the worst kind of war crime.

This should not surprise us. President Obama has become one of the the great war-mongers of our history, presiding over an illegal war against Libya, another against Somalia, a third against Syria and now a fourth against Yemen. He is pressing towards war against Russia by moving US forces up close to the Russian Border in Estonia, Ukraine and elsewhere in Eastern Europe while imposing sanctions on Russia that are expressly aimed at “regime change” targeting President Vladimir Putin. He has more recently absurdly labeled Venezuela a “national security threat” to the US, earning the enmity of almost the entire Latin American region, save only the US puppet state of Panama. He has continued to have US forces occupy Afghanistan, where they maintain a pro-US puppet regime in power. And of course he persists in personally overseeing a drone war campaign against myriad nations — all of it illegal — and in terms the numbers of its civilian victim slaughter, an ongoing warcrime of immense proportions.

So for the sake of Iran and humanity, one small cheer for the tentative agreement reached with Iran to limit their nuclear program. Let’s all hope that the agreement survives death by a thousand cuts in both Tehran and Washington.

But let’s not go overboard in praising the president, who remains an insult to the Nobel Peace Price, a bloody killer of innocent men, women and children, and a blight on America’s reputation around the world.