This is the first part of a two-part series on Led Zep in DC. Click here for Part II

It was a few days before Christmas, 1970, and Elvis Presley was suddenly obsessed with a strange notion. Not another late-night private shopping spree for Lisa Marie, or a cross-country hamburger run this time. No, what Presley had in mind was far more important: the trumpet of destiny was once again beckoning him to her siren call. It had been decided somehow in his drug-addled mind that the King of Rock and Roll should meet the President of the United States. Not next week; not next year, or in the next decade: this had to happen right now.

Within hours, and without telling anyone in his Memphis Mafia entourage, Elvis was on a red-eye flight to Washington, D.C. – alone. Before Vernon Presley could say, “Has anybody seen Elvis?” (thus setting off a full-scale panic back at Graceland), Presley had arrived at the White House gates uninvited, asking to see the president.

Elvis explained to an astonished security guard that he knew the president was very busy, but that he would just like to say hello and give him a gift (a commemorative World War II .45 caliber pistol). He also bore in his hand a six-page handwritten note requesting – incredulously enough – to be appointed a “Federal Agent-at-Large” in the Bureau of Narcotics and Dangerous Drugs.

Once it had been determined that the letter was genuine and that this heavily armed, velvet-and-suede-clad man at the gate really was the Elvis Presley, phones began ringing frantically all over the White House. “What the hell do we do with this guy?” was the question of the day. Elvis waited patiently in his three-room suite back at the Hotel Washington while the president’s men scrambled to accommodate his bizarre request.

In a staff memo fired off quickly to Nixon’s Chief of Staff H.R. Haldeman, the president’s Special Assistant Dwight Chapin suggested that “If the president wants to meet with some bright young people outside of the government, Presley might be a perfect one to start with.”

Haldeman scribbled in the margins of the memo, “You must be kidding.”

Nevertheless, he approved the visit, and Presley was finally allowed entry into an inner sanctum that no rock-and-roller before him had ever penetrated: the Oval Office.

That groundbreaking summit brought a new whiff of respectability to rock and roll music, and yet even by the early 1980’s, rock bands still weren’t exactly welcome visitors on Washington’s elite holiday party circuit. Reagan’s Secretary of the Interior James Watt memorably banned the clean-cut, all-American Beach Boys from the annual July 4th Concert on the Mall in 1983.

Watt had announced that all rock bands attracted “the wrong element,” and that the Reagan administration opted for a “wholesome” program featuring Wayne Newton. “We’re not going to encourage drug abuse and alcoholism,” Watt sniffed, “as was done in the past.” 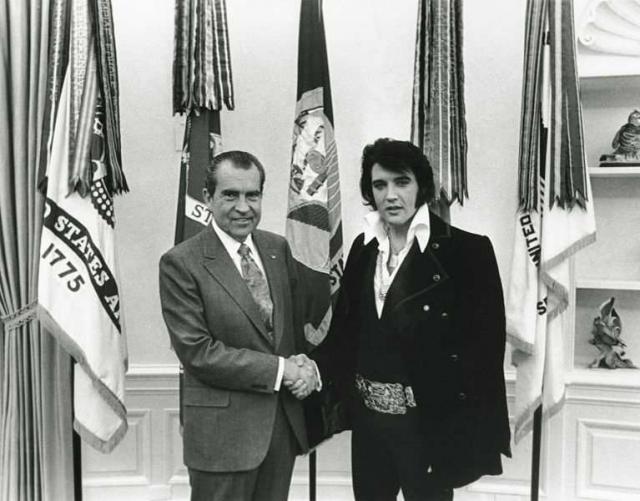 Nixon and Elvis:According to the National Archives, one item has been requested more than any other over the past forty two years; more than the Bill of Rights or even the Constitution of the United States. Yes, it’s this iconic photograph of Elvis Presley shaking hands with President Richard M. Nixon on the occasion of Presley’s surprise visit to the White House. December 21, 1970 (photo: National Archives)

Secretary Watt was apparently unaware that the Beach Boys had played the White House just a month before in June, at Ron and Nancy Reagan’s personal request. Watt later apologized to the Beach Boys after learning the Reagans were fans of the band. Reagan gave James Watt a “shoot yourself in the foot” award over the embarrassing incident and invited the Beach Boys back in 1985 to play his second Inaugural concert. The times they were a-changin’, but still…not that much.

Your time is Gonna Come

Had you told me then – some thirty years ago during the waning years of the long, Cold War – that a Russian ballerina, a black bluesman from Lettsworth, Louisiana, and the English kings of debauch, Led Freaking Zeppelin, would be honored at the White House by the nation’s first black president within our lifetimes, I would have told you to dream on and fuck off.

But there they were: ballerina Natalia Makarova, blues legend Buddy Guy, Zeppelin’s Jimmy Page, Robert Plant and John Paul Jones, all sitting quietly in the distinguished East Room of the White House on December 3, 2012. Unlike previous visits by Elvis Presley and The Beach Boys, these artists were not unexpected visitors or performing court jesters; they were honored guests of the president.

As I listened intently to president Obama singing their collective praises – along with their fellow Kennedy Center Honorees Dustin Hoffman and David Letterman – I could only shake my head in amazement and think to myself, “This can’t be happening!”

On more than a few occasions during the ceremony I saw that same “look how far we’ve come” grin spread across the faces of several attendees, including one Jimmy Page, who later called the whole experience “surreal, like a dream.”

When asked if they had ever been invited to the White House before, Robert Plant exploded in a cackle of laughter. “Naaaah, you’re joking, right?” Reflecting back in time, Plant’s face suddenly turned stoic, and a hint of bitterness crept into his tone.

“We were hardly the toast of the American political establishment back then,” Plant pointed out sharply. “Your government and police certainly were interested in us, but not for our music. But we were being questioned quite often!”

The native British band expressed great excitement (and perhaps some befuddlement) at being chosen for this prestigious award, because the Honorees are recognized for making unique contributions to American culture. Of the 178 recipients of the Kennedy Center Honors over the past three and a half decades, only one other British rock band has been chosen: The Who in 2008.

Led Zeppelin guitarist and sonic architect Jimmy Page considers the selection of Led Zeppelin in 2012 to be “a terrific honor.”

“We owe such a massive debt to American music,” Page said. “It’s a thing that definitely seduced us all to be want to be part of the music.”

“Everything that we talk about is American, from our music tastes more or less (and maybe north African and Egyptian).” Plant agreed. “Our mutual love of and absolute and total influence by American music whether it’s from Mississippi or Chicago in 1982 – it’s great because we’re sort of Americans but…not – of course.”

Although Plant is still a British citizen, he now lives part-time in Austin, Texas with his musical partner and lady love Patty Griffin. “I do consider myself an American in many ways,” Plant said. “Austin feels like home to me now.”

“So the fact that we get to go to this thing and meet the most dynamic and charismatic American outside of America – Obama – bar none is a great, great privilege.”

A short time later Plant, Page, and Jones were shaking the president’s hand during a White House reception preceding the Kennedy Center Honors. In a wildly mixed crowd that included celebrities such as Morgan Freeman, Lenny Kravitz and Page’s old school chum Jeff Beck, there were still plenty of old-guard Washingtonians propped up on their walkers and canes, casting disapproving glances at these gray haired, tuxedo-clad hippies actually being honored in the East Room. There goes the neighborhood, indeed.

“It’s been said that a generation of young people survived teenage angst with a pair of headphones and a Led Zeppelin album,” President Obama said in his remarks to the Honorees. “And a generation of parents wondered what all that noise was about.

“But even now, 32 years after John Bonham’s passing — and we all I think appreciate the fact — the Zeppelin legacy lives on,” Obama proclaimed. “The last time the band performed together in 2007 — perhaps the last time ever, but we don’t know — more than 20 million fans from around the world applied for tickets. And what they saw was vintage Zeppelin. No frills, no theatrics, just a few guys who can still make the ladies weak at the knees, huddled together, following the music.”

The president’s speechwriters couldn’t resist that niggling temptation to rib the members of Led Zeppelin over their party-boy reputations.

“Of course, these guys also redefined the rock and roll lifestyle.  We do not have video of this,” President Obama quipped. “But there were some hotel rooms trashed and mayhem all around.  So it’s fitting that we’re doing this in a room with windows that are about three inches thick and Secret Service all around. So just settle down, guys…these paintings are valuable.”

The Kennedy Center Honors aired on CBS December 26. Part Two of TCBH’s coverage will take us to the Kennedy Center for an all-star tribute to the 2012 Honorees, and more with the members of Led Zeppelin.

LORI SPENCER is a veteran journalist and musician from Austin, Texas, and is the newest member of the ThisCantBeHappening! collective. Check her Facebook and Twitter feeds for breaking news updates from Austin and the road