That lie told in 1942 is a link in the sordid chain of perceptions and practices that have produced the present brouhaha surrounding the 2016 Oscar awards featuring an all-white bevy of acting category nominations.

That lie is part of a legacy the stretches to the very founding of the United States of America. That legacy is the persistent refusal to forthrightly tackle racism, particularly insidious institutional racism.

The fact that so few have no clue about this Hollywood lie evidences the need for better understandings about facets of American history that are purposely forgotten yet have a pronounced impact on the contours of current society.

Highlighting forgotten facets is a prime reason for the existence of Black History Month, an annual recognition of the contributions and achievements of African-Americans held every February. However, each year, many across America castigate Black History Month as unnecessary and divisive. 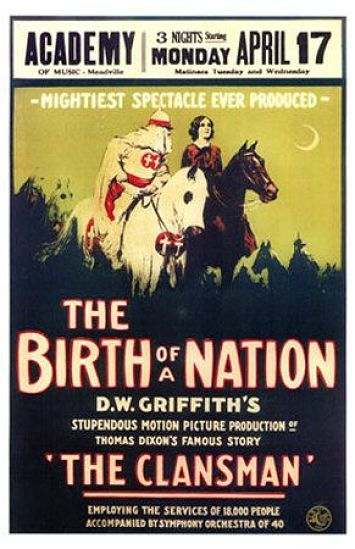 The Birth of a Nation – One of Hollywood's most racist movies
It’s not surprising that many of those who find Black History Month unacceptable are comfortable with accepting a movie industry that continues to present an illusion of inclusion while fanning the race prejudice that pollutes the very core of democracy in America.

Interestingly, assailing Black History Month is an interracial exercise in America. Critics of Black History Month include blacks, most recently FOX News commentator Stacy Dash, a person who gained her stature through starring in the 1995 Hollywood movie “Clueless” and its network television spinoff.

That Hollywood lie is rooted in the summer of 1942, when top movie industry producers in Tinseltown pledged to provide better roles for black actors and to improve the images of blacks presented in their movies.

But those Hollywood honchos failed to fulfill their pledge made during a meeting with the then head of the NAACP, America’s largest Civil Rights organization.

That meeting and its unprecedented pledge made headlines in the Black Press across America. “Movie Moguls Pledge To Give Race Better Roles –- Executives High In Hollywood Promise Change,” stated the headline on an August 1942 article published in the Atlanta Daily World newspaper.

An article in the Pittsburgh Courier, a black newspaper that campaigned for changes in Hollywood, quoted the then president of the Academy of Motion Picture Arts and Sciences, who stated, “This is one of the greatest moments this industry has ever had for doing the job we have all dreamed of doing for our country and the world.”

That Pittsburgh Courier article also quoted NAACP head Walter White, who during his remarks at that meeting told the Hollywood honchos they could make “magnificent contributions” by correcting “misinformation” driving racial divisions across America. White reminded those producers of the importance of lessening racist “stereotypes” in their movies, contending that doing so could contribute to reducing “the load of misunderstanding from which the Negro is suffering.”

In 2013, a top Academy award-winning movie was “12 Years A Slave.” That movie depicted the horrific experiences of a free black man kidnapped into slavery in 1841. Four decades before that crime against Solomon Northup, black leaders in Philadelphia petitioned the U.S. Congress to enforce federal law and stop the kidnap and enslavement of free blacks -– many of whom had been born free and had never been slaves.

Congress, then composed of many slave-owners, refused to uphold the rule of law and indignantly rejected that 1799 petition.

Had the U.S. Congress taken action to protect free blacks from the crime of illegal enslavement Northup probably would have avoided his ordeal thus no content for his account of that ordeal published in 1853 and no ordeal to depict in that award-winning movie based on Northup’s book.

Had Hollywood producers kept their 1942 pledge, American society, no longer treated to the racism that Hollywood movies often subliminally reinforce, might have shed some of it individual and institutional racism.

Have improvements occurred since that failed pledge in 1942?

The current president of the Academy, for example, is a black woman. And the Academy has announced reforms in the wake of the stink arising from the colorless cast of 2016 acting nominees.

But soiled experiences throughout American history show pledges are not always kept.