Philadelphia — On the day before the opening of the 2016 Democratic National Convention, as top Democratic Party members settled into swank hotel suites around Philadelphia, Green Party presidential candidate Jill Stein spent much of that day interacting with the homeless and others in one of Philadelphia’s poorest communities.

Stein, a physician, walked the streets of Philadelphia’s Kensington section, hosted by anti-poverty activists in that community.

“Kensington is what too much of America looks like,” Stein said. “In America today most people either live in poverty or are near poverty. This must change! Government today works for the wealthy special interests and not in the interests of most people.” 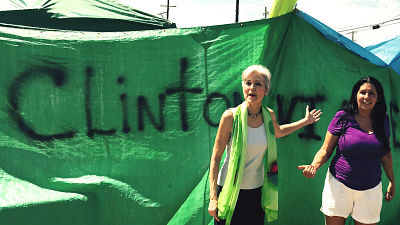 Stein’s trip through the impoverished Kensington was not a photo-op. Stein has spent time in that predominately Hispanic community on previous visits to Philadelphia. Further, none of the hundreds of mainstream media reporters in Philadelphia for the DNC showed up to shadow Stein. The mainstream media has failed to extend coverage to this third party candidate remotely comparable to coverage given to presumptive Democratic candidate Hillary Clinton and Republican candidate Donald Trump.

The time Green Party candidate Stein spent in Kensington constituted a stark contrast to top leaders of the Republican and Democratic parties. Top Republicans disparage areas like Kensington pillorying poor residents for causing their poverty. Top Democrats, on occasion, express empathy for those living in severely impoverished communities like Kensington but do very little to address the structural inequities that keep people mired in poverty.

“I live here 365-days a year. I see the problems of this community everyday and it seems that no one cares,” Kensington resident Bernard Gur told Stein as she walked through a notorious drug area. “Police will lock up a person for having a small bag of dope but they can’t arrest the person who has killed two women down here recently.”

Stein started her day in Kensington at ‘Clintonville’ – a tent encampment of homeless on a vacant lot that was erected largely to shame the Democratic Party for spending more than $60-million on DNC functions while over one quarter of Philadelphia’s residents struggle in poverty. Philadelphia has the highest poverty rate of any large city in America. The Philadelphia-based Poor People’s Economic Human Rights Campaign erected the ‘Clintonville’ encampment.

“This city will spend millions on parties during the DNC yet there are people living in Kensington today that have no jobs, no food and no running water in their houses,” Poor People’s Campaign coordinator Cheri Honkala said. She noted that many Kensington residents live on $2 per day.

“I know of one man who died because he needed a new heart but couldn’t get on the transplant list because he didn’t have health care and he couldn’t prove that he’d had enough money to take care of himself if he did receive a new heart,” Honkala recounted.

Galen Tyler, a member of the Poor People’s campaign, said Kensington is “somewhat symbolic of the U.S.” because it was once an area filled with factories that provided good paying jobs for low-skill workers.

“Those manufacturing jobs have left America and are never coming back,” Tyler said. “Welfare payments and drug sales are the Number One source of income in this area.”

Problems related to maltreatment of the poor are not exclusive to Kensington said Connie Burton, an anti-poverty activist from Tampa, Florida who was at ‘Clintonville.’

“In Tampa we have a Democratic mayor who is trying to attract Millennials to the city by building new housing but he’s demolishing five public housing developments to accomplish that new housing,” Burton said. “We see this as a form of genocide. We are being pushed out as if the poor can’t live with the middle class. We can’t rely on the Democratic Party to save us.”

Stein, while focusing on issues of impoverishment in Kensington, did make a few classic presidential campaign trail points.

Stein said Bernie Sanders should rescind his endorsement of Hillary Clinton in the wake of leaked emails detailing how top staff at the Democratic National Committee worked to undermine the presidential campaign of Sanders to aide the candidacy of Clinton. Democratic Committee head, Congresswoman Debbie Wasserman Schultz, announced her resignation around the time Stein walked through Kensington.

Stein called Hillary Clinton a “sitting duck” for campaign trail criticism from GOP candidate Donald Trump. “She is corrupt and that State Department email scandal will not go away.”