Washington, the general whose armies secured America’s independence during the Revolutionary War, kept slaves inside that house, many of whom slept in an area added at the President’s request to contain them, located at a spot literally on the doorstep of the Liberty Bell Pavilion.

The President’s House project, featuring a rendering of that Executive Mansion residence, will also include a memorial to those slaves held as property in a condition of enforced servitude by Washington. This is a first for the United States, a nation built on slavery but a nation that still, over two hundred years after its July 4, 1776 Declaration of Independence, turns a blind-eye to that blot on its legacy of liberty .

That memorial to nine slaves held as slaves by Washington inside his Philadelphia “White House” evokes intense debate among blacks and whites.

Some blacks blast any recognition of slaveholder Washington, while some whites for their part blast the prospect of slavery staining this project’s long-delayed recognition of the birth of America’s executive branch. 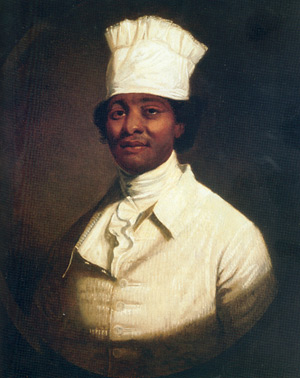 Hercules, Washington's chef, and one of the slaves he brought to Philadelphia as president, who later fled to freedom

“Why are we honoring that house of bondage? Do Jews rebuild concentration camps?” complains Charles Blockson, an internationally revered historian specializing in the history of blacks during the early decades of the United States.

“We need a memorial to all enslaved Africans, not just the nine. Why isn’t the story of resistance told? A black woman burned down her master’s house two blocks from this site. Why is her story not told?” said Blockson, curator emeritus of the Charles L. Blockson Afro-American Collection at Temple University, the nation’s second largest collection of artifacts dealing with blacks.

Rob Morris, a descendant of Robert Morris the wealthy businessman/slave-trader who owned the residence Washington occupied, condemns the co-recognition of the President’s House and slavery as a case of “political correctness” run amok.

“How did a national shrine to the origins of the Executive Branch morph into racial propaganda,” Morris questioned in a recently published article in American Thinker magazine.

This is a bit much, comparing MLK’s lifting of phrases in his speeches to Washington’s enslaving of human beings. One can understand why Morris might want to bury the Washington slavery story, given the family burden of of his own ancestor’s guilty role in the atrocity of human bondage, but really, family honor aside, how can exposing the grand irony of the first president in the “Land of the Free” keeping slaves in his official residence be excised from an official memorial? This not not a matter of PC, it’s a matter of censoring history.

Despite the heated disputes on both sides of the President’s House project, most acknowledge that publically contextualizing the freedom-gained/freedom-denied conundrum still animating American society is a game changer in terms of accurate depiction of America history… at least highlighting information long suppressed and/or shrouded by stereotypes.

Authorities at the Independence National Historic Park in Philadelphia first conclusively documented slavery at the President’s House in the mid-1970s but kept that information out of its exhibits and tour guide narration in part out of a concern about upsetting white tourists visiting Independence Hall, the Liberty Bell and other fabled tourist sites in that historic section of Philadelphia managed by the National Parks Service.

The Parks Service similarly didn’t give prominence to the origins of the naming of the Liberty Bell until after the renewed push for the President’s House project began nearly a decade ago.

The bell was originally known as the State House Bell based on its location in the tower of Pennsylvania’s then State House, now known as Independence Hall. It was early 1800s anti-slavery abolitionists who used the image of the bell in their campaigns to end that institution, and who gave it its current name of Liberty Bell.

“The President’s House is a place that challenges beliefs in America’s Founders. What does freedom mean? What obligations are there to tell the truth? Freedom in America was built upon the enslavement of others,” said Randall Miller, a professor at St. Joseph’s University in Philadelphia and a member of Ad-Hoc Historians, one of the groups instrumental in the President’s House project.

Charges of political correctness aside, the President’s House project is an example of an often overlooked tradition that is proverbially American as apple pie: blacks and whites working together to achieve a common goal. White historians, black activists, a white congressman, and black mayors all made significant contributions to making the President’s House/Slave Memorial project a reality.

“Why is it considered impolite or even racist to raise issues of correcting historical matters involving race? You can’t accurately and honestly tell the story of the President’s House without telling the story of slavery,” said Michael Coard, a Philadelphia attorney and founder of ATAC (Avenging The Ancestors Coalition) a black activist group involved in pushing the project, and particularly the memorial, to include the story of those blacks held by Washington (who carefully rotated slaves in and out of the residence, on advice of his attorney general, an end-run around the law by the mythically truth-telling president which was designed to avoid his running afoul of the Emancipation Law operative in Pennsylvania after 1780, which barred out-of-state slaveholders from bringing slaves into the state for more than six months’ time).

One exhibit under consideration for this project will include information about the December 1799 petition that free blacks living in Philadelphia sent to the US Congress – the first from black Americans protesting slavery.

That petition, signed by 74 blacks and authored by local black leader Rev. Absalom Jones, requested the elimination of slavery plus protection for free blacks from Fugitive Slave Act abuses that included kidnapping ‘Freedmen’ back into slavery.

According to widely-held stereotypes, slave-era blacks couldn’t write and they happily accepted their freedom-crushing circumstance…whether enslaved or free. That ‘they can’t read’ stereotype was the sentiment strenuously expressed by a South Carolina Congressman who opposed that 1799 petition during a January 1800 congressional debate. Congress overwhelmingly rejected that petition.

Rosalyn McPherson, manager of the project for the City of Philadelphia and Independence National Historical Park, said a lot of energy and effort is going into creating impactful exhibits at the President’s House/Slave Memorial.

“We are still working to improve the tone (of the planned exhibits) to get it right,” said McPherson during a contentious public meeting on the project in May. “We want balance. There are people who are upset that most of the site is devoted to the story of slavery.”

Barack Obama, the first non-white U.S. President, is scheduled to participate in the ribbon-cutting ceremony the grand opening for the President’s House/Slave Memorial planned for late Fall 2010.